To borrow surfing lingo, 2018 has been a wipeout for investors. Many asset classes are in negative territory, while even oil’s status as a winner is coming under threat.

On a screen of global equity markets awash with red, China still manages to stand out. The CSI 300 index is down almost a fifth for the year, as Beijing’s efforts to stem shadow financing hit the economy of the world’s most populous country.

That has rippled across other emerging market economies, industrial metals prices and the export-focused eurozone, where data this week showed the economy slowed more than expected last quarter.

Significantly, the effects of China’s economic stumble are beginning to wash up in the US. Among the host of reasons given for Wall Street’s October swoon were the worrisome warnings from some US companies that the Sino-American trade war is driving up their costs.

Indeed, the drag from tariffs dominated the latest snapshot of US manufacturing released this week by the Institute for Supply Management. It added to evidence that US companies — beyond those tech giants already under pressure to bring manufacturing home from China — are concerned.

Whether that message is getting through to the Oval Office or not, US president Donald Trump, via his Twitter pulpit, appeared to offer some encouragement on Thursday with the comment that he and Chinese president Xi Jinping had enjoyed “a long and very good conversation”. That triggered a jump in the renminbi and banner day for Chinese stocks on Friday. 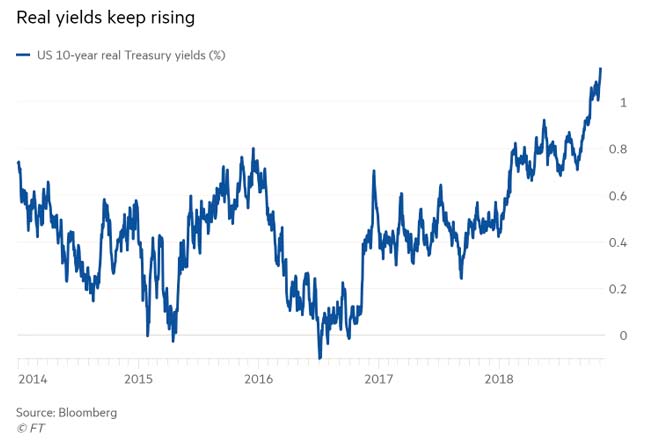 A fundamental improvement in relations between the two countries will require more than words. Action from both sides to resolve their rivalry truly matters for markets.

But the problem is that tensions between Beijing and Washington run far deeper than this trade dispute. The pressure on US stocks emerged in October after US vice-president Mike Pence delivered a hard-hitting speech outlining a desire “to reset America’s economic and strategic relationship with China”.

The danger for investors is that trade and intellectual property are just two of the Chinese targets of US pressure, which can intensify. As one investor told me this week, more speeches from administration figures such as that of Mr Pence will be telling.

What markets need to hear if Messrs Trump and Xi do indeed meet at the G20 meeting in Argentina at the end of the month, is at least some rapport and a commitment to hold future talks. Now, the global economy still faces the prospect that the current 10 per cent tariff on $200bn of Chinese goods jumps to 25 per cent from January. Given there is the risk of tariffs being applied to the remainder of China’s exports to the US, progress on trade talks is needed — and soon.

If that happens, the start of 2019 could make this year look a benign one for investors. It also raises the spectre that renewed pressure on equities after a tough 2018 ultimately delivers a deeper economic shock.

A significant escalation in trade protectionism is required to inflict “serious damage to the global economy”, according to Capital Economics, but they also highlight the risk that even “a modest escalation triggers a sharp fall in some equity prices, which in turn creates financial dislocation that feeds back to economic activity”.

While plenty of investors anticipate concessions from China — and perhaps even before the G20 meeting — it takes two to tango. Given the tougher backdrop for the global economy and markets, each side has incentives to repair relations.

A further depreciation in the renminbi gives China a safety valve to help the economy and soften the blow from tariffs. Yet a gradual decline of the sort we have seen is one thing, but a sharp decline risks greater financial market contagion, capital flight and undercuts Beijing’s long-term ambition of opening up its markets to global investors.

So while China is in a tight corner, the pressure the White House can exert is not boundless. As Mr Trump juices the economy, the US stands on the cusp of $1tn budget deficits that have already swollen the monthly sales of Treasury debt.

As Guy Stephens at Rowan Dartington notes, while Mr Trump extols his tax cuts, “his concern should be focused on who will buy the colossal issuance — surely not the Chinese as before”.

With almost $1.2tn, China tops the chart of major foreign holders of US government debt, but we have likely seen the peak in Beijing’s exposure to Treasury paper. Although US inflation expectations have fallen lately, signifying that the bond market does not anticipate a price shock via tariffs, 10-year real Treasury yields are now at their highest level since 2011, reflecting deficit worries.

Clearly relations between the world’s two powers are changing and their growing rivalry is something markets can handle, but only if this week’s hints of a rapprochement over trade and commerce are for real.