By Sam Fleming in Washington and Brooke Fox in New York | February 07, 2019 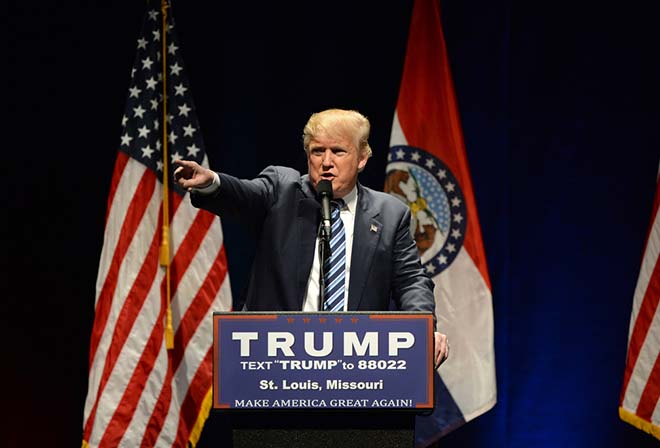 As Donald Trump basked in the glow of America’s seemingly gravity-defying economic expansion at his State of the Union address, he will have been well aware of how critical its longevity will be to his fortunes in the 2020 presidential race.

Key economic indicators in the US remain strong — most notably business hiring — and the Federal Reserve has pivoted in a markedly dovish direction to avoid short-circuiting the expansion. But threats are nevertheless beginning to simmer beneath the surface: the eurozone is decelerating sharply, as is global trade, gauges of Chinese business activity are softening, and US confidence has been hit by Mr Trump’s tariffs and the federal shutdown.

“Whether or not you have a recession in 2020 is the biggest determinant of President Trump’s re-election odds,” said Marc Sumerlin, a former official in George W Bush’s White House who is now managing partner at Evenflow Macro.

“The current economic data is looking positive, but there are forward-looking indicators that are looking weaker — housing permits for example, together with signs that banks are tightening credit modestly. The biggest concern is there are no new catalysts for growth next year.”

In his speech, Mr Trump claimed the economy is thriving “like never before” in a speech that was peppered with exaggeration — this is not an unprecedented economic boom, for example. But a labour market where job vacancies outnumber the ranks of the unemployment is unambiguously a very tight one, and wage growth has shown signs of picking up — even if at 3.2 per cent it is running below pre-recession highs. 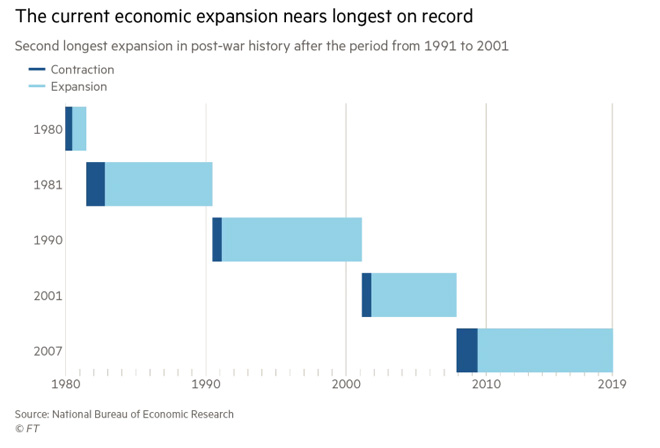 Postwar expansions in the US have ranged from a mere 12 months in the 1980-81 recovery, to 10 years in the boom of the 1990s. The current one dates back to long before Mr Trump took office — having started in June 2009. Assuming the expansion lasts until the summer, it will become the longest on record in the US.

The recovery’s longevity has itself raised some concerns that its days must soon be numbered, but this notion is dismissed by economists. An analysis of past business cycles from Glenn Rudebusch of the San Francisco Fed in 2016 found that an 80-month-old expansion effectively had the same chance of ending as a 40-month one.

“Expansions, like Peter Pan, endure but never seem to grow old,” he found. Australia is now in its 27th year of recession-free expansion.

So if old age does not kill the US expansion, what will? Ethan Harris, a global economist at Bank of America Merrill Lynch, said past culprits included exploding asset price bubbles, damaging surges in the oil price and an overzealous central bank that tightens policy too much. Right now none of these factors looked set to derail US growth, he added. 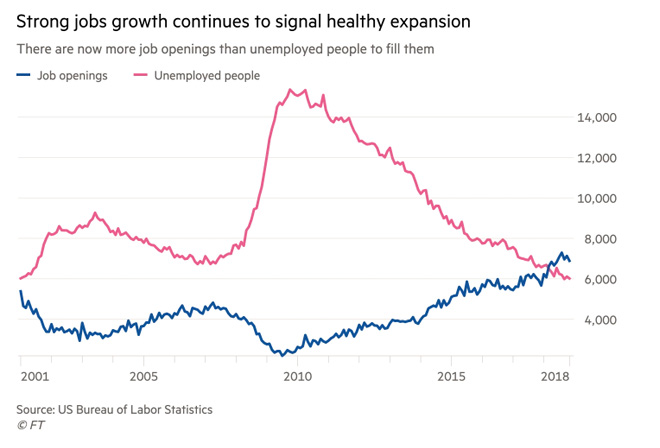 Excesses in the financial markets are notoriously hard to spot, much less prevent, but particular concerns have been swirling around leveraged lending, where standards have deteriorated. Nevertheless, the Fed insists it is sanguine: Jay Powell, the Fed chairman, said in a November speech that he considered the financial system to be in overall “good health” after his officials put out their first financial stability report.

Oil prices are, meanwhile, by no means at menacing levels. And the danger that the Fed inadvertently crushes the expansion has receded after Mr Powell took interest-rate increases off the agenda in a meeting last week and signalled his willingness to adjust the Fed’s balance sheet reduction programme if markets or the economy falter.

As such, some analysts struggle to see any clear warning signs pointing to a US downturn. “I don’t think at this stage we are seeing any signs of a recession on the horizon,” said Gregory Daco of Oxford Economics.

Not all economists are quite so sanguine. In particular, leading indicators for the global economy’s outlook have been drooping, leaving the US looking like an increasingly lonely engine for world growth. 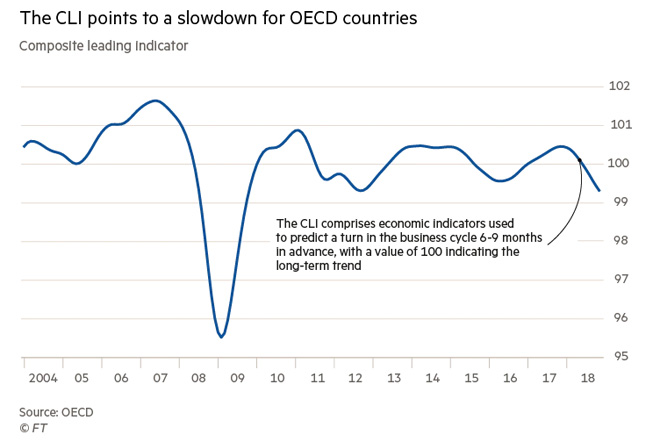 The US is a relatively closed economy, and past expansions have withstood the effects of overseas setbacks — notably the euro crisis that started 10 years ago and the Asian financial crisis in the late 1990s — but that does not mean those developments are irrelevant.

More than a third of S&P 500 companies’ earnings come from overseas; ebbing growth in those markets will damage confidence among executives, as well as curbing export growth. So could the rising uncertainty about global supply chains as Mr Trump pursues his battles over trade with China and other major markets.

Further damaging corporate sentiment is the prospect for continued dysfunction and policy errors in Washington itself. The record-long partial federal government shutdown imposed only a temporary dent to growth, but battles loom over the need to raise the ceiling on the US’s national debt, and prevent tough public spending restrictions from clamping down on the economy in the coming fiscal year. 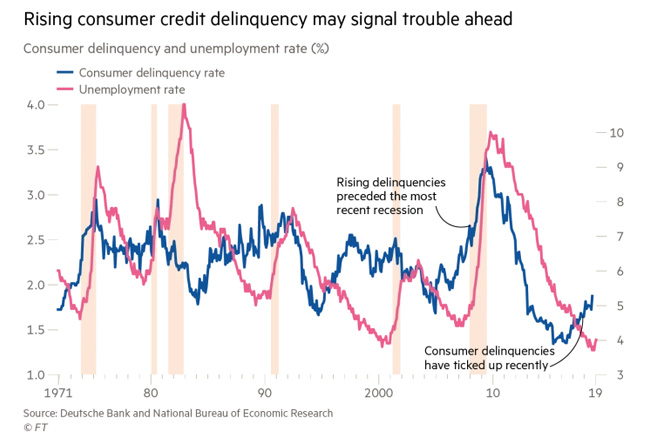 Sectors of the economy that are sensitive to higher borrowing costs are showing signs of weakness, Robert Kaplan, Dallas Fed president, pointed out in a note this week: as of November, new single-family home building permits were down 4.3 per cent from their February 2018 peak. Financial conditions have also tightened, with an increase in high-yield bond spreads late last year, although some of that has since reversed.

Consumer loan delinquencies have also been trending higher, said economist Torsten Slok of Deutsche Bank, even if they still remain far lower than during past downturns. And Wall Street’s neuralgic attitude towards the Fed’s longstanding balance sheet reduction programme in late 2018 speaks to an edgy and unpredictable mood in financial markets.

To Mr Daco of Oxford Economics, such risks underscore the need for a dovish Fed. “We are not in a situation where the Fed is likely to tighten too much or too rapidly,” he said. If central banks around the world adopt a more expansionary stance, “that may come to save the global economy and prolong the business cycle”.