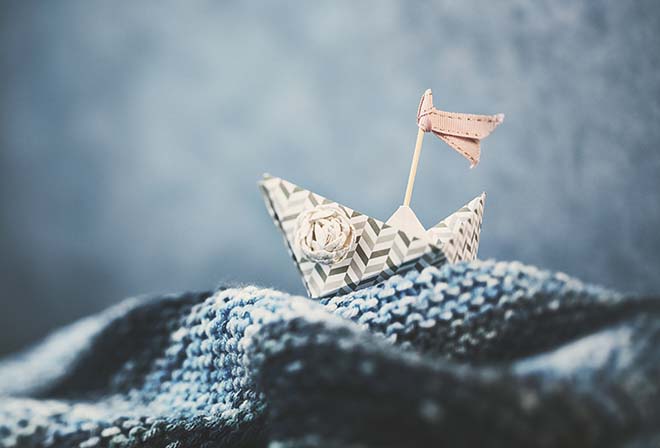 Global merger and acquisition activity in the first nine months of 2018 set a record, eclipsing a previous high reached on the eve of the financial crisis more than a decade ago.

Deals worth nearly $3.3tn have been agreed so far this year, a 39 per cent jump from 2017, as companies race to remake themselves in the face of sweeping technological change. Corporate executives have taken advantage of record stock prices, buoyant consumer confidence and relatively low borrowing costs — but a decline in fees has taken the edge off the boom for Wall Street banks.

The total has been bolstered by a string of mega-deals, defined as takeovers worth more than $5bn. Corporate giants including US cable group Comcast, wireless provider T-Mobile and Japan’s pharmaceutical maker Takeda reached for M&A to head off competitive threats and expand their businesses.

And activity continued at a brisk pace in the third quarter. Consolidation was particularly strong in the energy, healthcare and technology sectors in the past three months, including Energy Transfer Equity’s $62bn takeover of Energy Transfer Partners, Dell’s attempted $22bn purchase of VMware tracking stock, and chipmaker Broadcom’s $18bn buyout of CA Technologies. 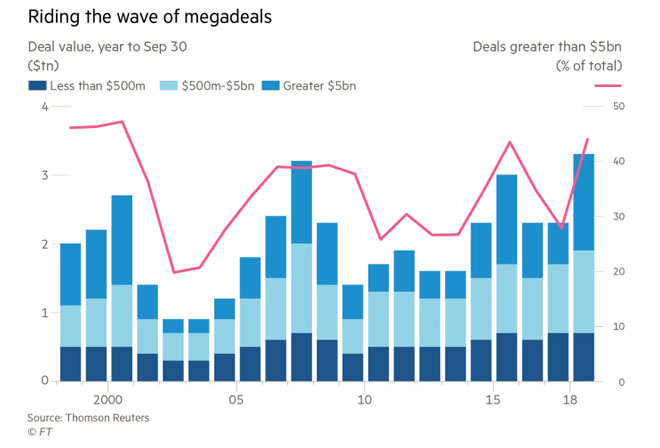 The blitz of energy takeovers was accelerated by an investor revolt against complex corporate structures and by changes to the US tax code. Big energy companies were also attracted to shale assets put up for sale as the price of oil has climbed. BP in July agreed to a $10.5bn takeover of BHP’s US shale assets.

Morgan Stanley topped Goldman Sachs as the most active adviser on mergers and acquisitions. The two Wall Street investment banks were followed by JPMorgan, Citigroup and Bank of America, according to Thomson Reuters data.

M&A activity can be fickle, and bankers warn that a stock or bond market shock could yet derail corporate tie-ups. But if dealmaking continues at a similar rate recorded in the first nine months of the year, takeover announcements could reach $4.3tn for the year. Only twice before has M&A exceeded the $4tn mark.

A surge in dealmaking, but fees are down 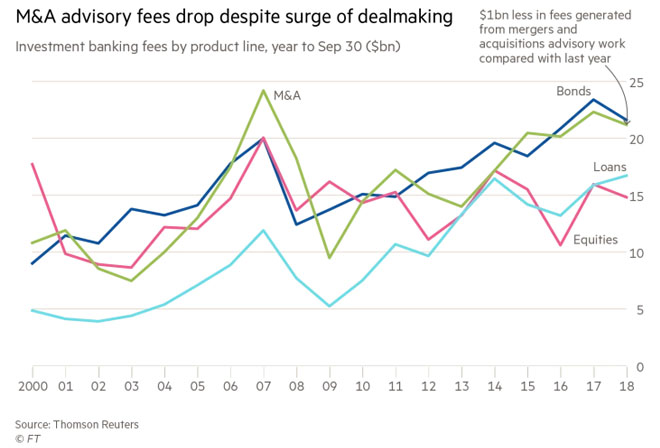 Record dealmaking this year will not necessarily lead to record fees on Wall Street, even as Morgan Stanley, Goldman Sachs and JPMorgan have each worked on more than $700bn of deals so far in 2018.

Investment banking fees are down 4 per cent from the first nine months of 2017, to $74.1bn, according to Thomson Reuters — a figure that still ranks among the top three years.

The decline stems in part from a drop in fixed-income underwriting and lower initial public offering fees. But it is also the result of a drop of more than $1bn in fees generated by M&A advisory work, which are down 5 per cent to $21.1bn.

The vast majority of bankers’ paychecks arrive when a takeover closes, often anywhere from six to 18 months after a deal is agreed, once the companies have won regulatory and shareholder approval.

For a number of high-profile deals, such as AT&T’s takeover of HBO-owner Time Warner, this has taken even longer.

Chris Ventresca, the global co-head of M&A at JPMorgan Chase, said that banks’ revenue figures would soon start to rise as large deals announced at the end of 2017 and earlier this year are completed.

Thomson Reuters estimates $16.3bn in M&A advisory fees hinge on deals that have been agreed but not yet closed, including multimillion-dollar payouts from CVS Health’s $69bn purchase of Aetna, United Technologies’s $30bn buyout of Rockwell Collins and Walt Disney’s $85bn takeover of 21st Century Fox.

Mr Ventresca acknowledged that a complex regulatory review process — with several G7 countries increasing the power they have to review deals on national security grounds— meant it was taking longer for transactions to clear.

“Companies are trying to do their part in advance by anticipating issues and dealing with them quickly or avoiding deals where there may be a low probability of success,” he said.

The US Department of Justice’s antitrust enforcer this week promised to cut the time to review mergers and not to place “an undue burden” on dealmaking. 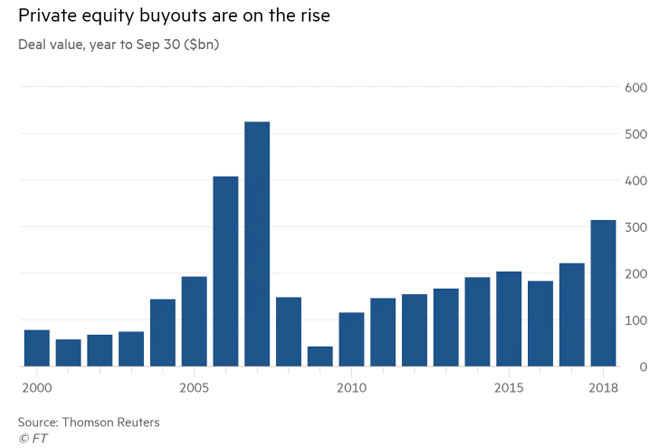 Some of the largest deals so far this year include so called public-to-privates. They include Blackstone’s purchase of Gramercy Property Trust in May and KKR’s acquisition of Envision Healthcare in June. In May, Silver Lake, the US private equity group, agreed to take ZPG, one of the largest internet property search groups in the UK, private in a £2.2bn transaction.

Bain Capital is in advanced discussions to take listed UK insurer Esure private in a £1.2bn deal. It is expected to close later this year. Separately, Apollo and Bain are in discussions with listed packaging maker RPC about a potential buyout.

Research by Bain & Company published this year found public-to-private transactions had risen last year to nearly double the level in 2016.

Private equity buyouts of public companies come at a time when buyout funds have raised record amounts of capital. According to data provider Thomson Reuters, global private equity dealmaking has totalled $314.2bn so far this year, the strongest period for buyouts since 2007.

Rob Pulford, head of financial and strategic investors group for Europe, the Middle East and Africa at Goldman Sachs, said record fundraising should drive mega-deals. “Private equity groups have a lot of money to spend and the big focus is on big deals.”

But he also had a word of warning: “Some of the public-to-private deals will be challenging as businesses are expensive. Private equity groups need to find a rough diamond or do something different, like break the company into pieces, or use one division to make acquisitions.”

Dealmaking in India takes off 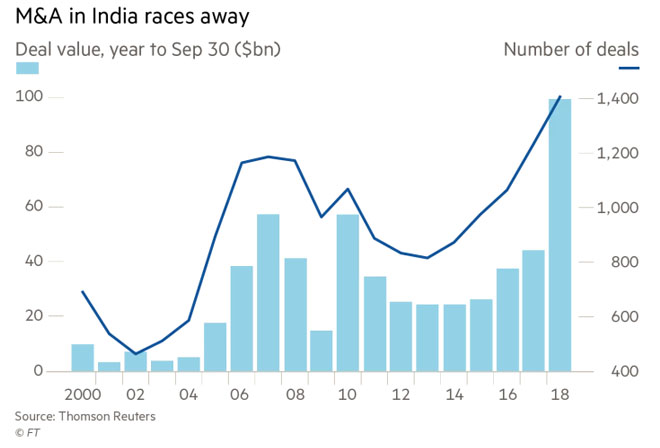 For the past eight years bankers have claimed that “this is the year that Indian M&A takes off”. They have mainly been wrong. Until now.

The value of M&A in the country has hit an all-time high for the first nine months of the year, with $99bn of deals during the period compared with $62bn for the whole of 2017. The surge in activity has come on all fronts: record-breaking inbound and domestic acquisitions, and a level of outbound transactions not seen since 2010.

Walmart’s $16bn acquisition of a majority stake in Indian ecommerce company Flipkart set a record for a foreign direct investment ticket, helping drive inbound deals to about $40bn, up 63 per cent year on year.

Many Indian entrepreneurs have been slowing organic expansion at home and boosting foreign buyouts, such as UPL Corp’s takeover of US-based Arysta LifeScience.

“This is the mindset change we have seen: less aggressive on capex and more aggressive on outbound M&A as a means to deliver growth,” said Sumit Jalan, co-head of India investment banking and capital markets at Credit Suisse.

The largest contributor to Indian deal flows has been domestic consolidation, where an aggressive new bankruptcy law is forcing control of indebted companies to change hands.

The new law has triggered deals such as the $5.2bn buyout of Bhushan Steel by Bamnipal Steel earlier this year. Total domestic M&A has hit $45.6bn so far this year, up about 190 per cent year on year.

“That space is still open. It hasn’t been fully tested by foreign players and there is still room for them to come in,” said Rupinder Malik, a partner at J Sagar Associates in New Delhi. 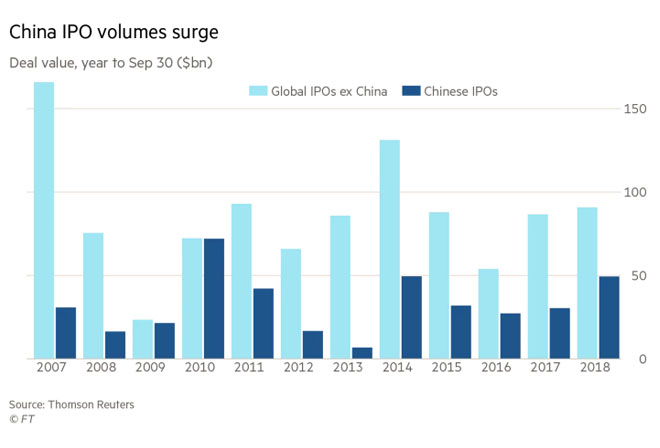 A series of “mega” IPOs this year has pushed the value of Chinese flotations to a four-year high.

Data from Thomson Reuters show that the $50bn in proceeds raised by Chinese IPOs year-to-date is 65 per cent higher than the same period last year, representing the third-highest level on record.

As a result, Chinese IPOs constitute more than a third of total global IPO proceeds so far this year, surpassing the US as the main issuing nation for the fifth consecutive year.

China Tower, the world’s largest telecommunications tower group by revenue, and Chinese smartphone maker Xiaomi have been among the largest IPOs.

China Tower Corporation raised $6.9bn in its IPO in August, the biggest amount garnered globally in a market debut since 2016, while Xiaomi raised $4.72bn in June.

Nonetheless, the number of Chinese companies to have listed this year has fallen by about 60 per cent, with only 145 issues so far during 2018.

“The China IPO market has seen a huge shift from state-owned enterprises to entrepreneurial private issuers who need growth capital so, for investors, rarely have there been so many opportunities to buy into the China growth story,” said Aaron Arth, head of financing group for Asia ex-Japan at Goldman Sachs.

He added that technology-related deals, including offerings from fintech and biotech companies, would continue into 2019.

Many Chinese companies have sought to float in the US this year. Bruce Wu, co-head of greater China equity capital markets at Citigroup, said that the number of Chinese companies going public in the US is on track for a record year, nearing 20 deals.

“There hasn’t been a year for a while where there has been such a large concentration of jumbo deals coming to market,” he said.