How big is the risk of another Black Monday equities crash? 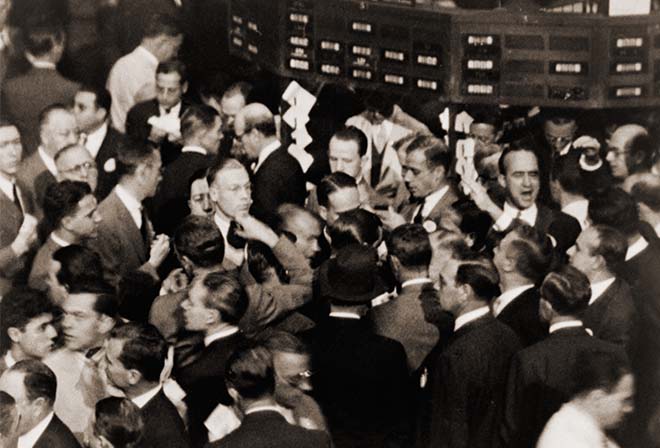 Art Cashin recalls the heady atmosphere that dominated the New York Stock Exchange for much of 1987. After five or six straight days of the market rallying, senior partners at brokerage trading desks would instruct the junior partners [traders] to "lighten up a little bit", Mr Cashin says. "When they did, the market just went higher."

"The market in 1987 was relentless," says Mr Cashin, director of floor operations for UBS Financial Services at NYSE, who began working on "the floor" as an assistant clerk in 1959, straight out of high school. "Unfortunately there are some similarities [to today]. It reminds me a bit of what we have seen this year."

Market veterans like Mr Cashin have no shortage of Wall Street war stories, but little compares to the events of October 19 1987, when US stocks fell more than 20 per cent — their biggest-ever one-day crash — giving birth to an event known as "Black Monday".

Yet with the 30th anniversary on Thursday, the comparisons with today's market are more than just a curiosity. With US equities on an almost uninterrupted bull run for more than eight years, boosted by a flood of cheap money, the prospect of another nasty surprise lingers over the market. 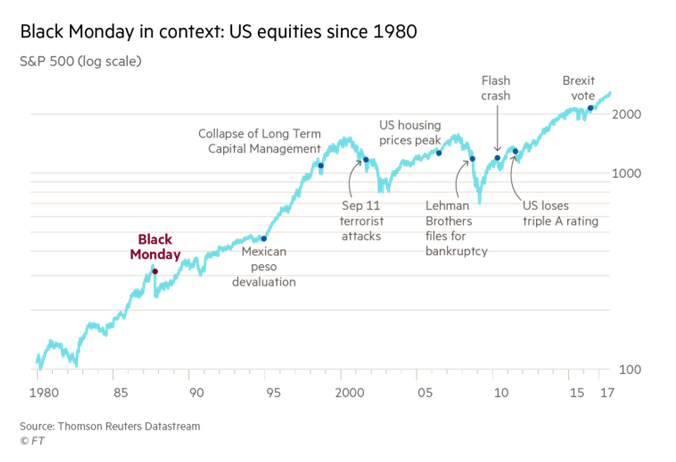 "People just keep buying the dips and following the money up. When you have been doing this for over 50 years, when you see those similarities, you say the last time it got like this it didn't end well," says Mr Cashin.

No two market eras are alike, yet the "buy the dips" mentality — something that has been stronger than ever on Wall Street this year — is only one of a number of striking parallels with 1987. After hitting a succession of fresh all-time records, valuations are stretched. Now, as then, the US is engaged in sabre-rattling with foreign foes, including Iran. Trading strategies designed to protect investors could end up exacerbating any correction, just as in 1987, while regulators could be as ill-placed to monitor risks as they were back then.

"There are similarities, and lots of them," says Rob Arnott of Research Affiliates and the global equity strategist at Salomon Brothers in 1987, although he does not expect severe market turbulence in the near future.

The biggest red flag is the most obvious: US stocks look historically expensive. The cyclically adjusted price-to-earnings ratio kept by Yale economics professor Robert Shiller is at levels topped only by the peaks before the dotcom bubble burst in 2000 and the Great Crash in 1929.

"That is disturbing company for us to be keeping," Mr Arnott says.

Black Monday was not just about valuations. It did not even start a bear market: unlike the 1929 or 2000 crashes, stocks had recovered in little over a year.

Instead, many observers saw it as an extreme technical accident. The most popular explanation hinges on "portfolio insurance" which used sales of futures in an attempt to limit damage to investor portfolios in a sell-off.

The strategy used protean computer programmes that would automatically sell index futures when markets fell, in theory protecting a fund's downside in return for a modest premium. When markets plummeted on October 19, the selling of more and more index futures turned a rout into carnage.

While the scale of Black Monday's slide might never be replicated — controls are now in place to halt trading in times of sharp declines and official intervention is expected — some people have warned about the dangers lurking in modern hedging strategies. 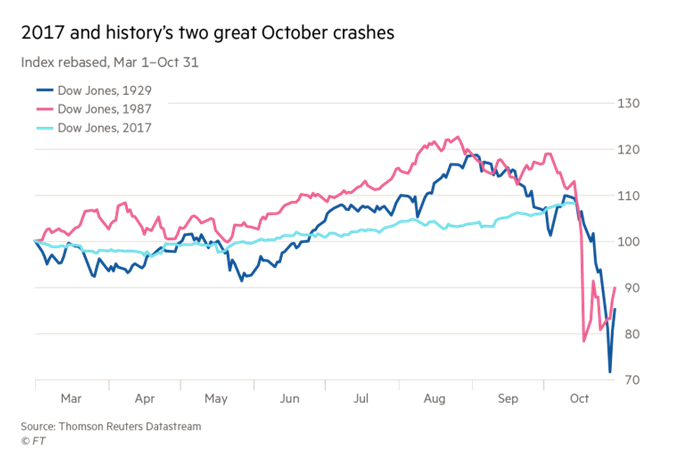 Although advances in computing power provide the opportunity to back-test strategies, it remains hard to know whether hedges could contribute to a broader unwinding of trades.

These funds target a specific level of volatility to maintain a constant level of risk — which is usually shorthand for how much they gyrate. If markets are rocky, they systematically sell down to slip below their target. The Vix volatility index, the CBOE's measurement of short-term volatility implied by S&P 500 option prices, has been hovering around all-time lows in recent years.

If there is enough money in "vol-control" funds — ranging from variable annuity accounts at insurers and trend-following hedge funds — then their automated selling can pour fuel on an already combustible situation.

"I don't think it's an accident waiting to happen, but it's something to watch," says Dean Curnutt, chief executive of Macro Risk Advisors. "It will take a significant shock to sentiment for it to start to matter, but then these things potentially feed on each other."

Exact numbers are hard to come by, but according to Deutsche Bank and JPMorgan, there is close to $1tn of funds that have embedded some sort of "vol-control" mechanism.

A related but separate concern is the swelling interest in "selling volatility" or betting that volatility will remain somnolent — something that has proved phenomenally profitable since the global financial crisis, prompting money to flow into popular exchange traded funds that offer retail investors a clean way to bet on tranquility.

Yet like portfolio insurance and volatility-control funds, selling volatility can exacerbate a market rout. Investors caught the wrong way if volatility spikes would have to hedge themselves by selling index futures, worsening the correction and driving volatility higher again. 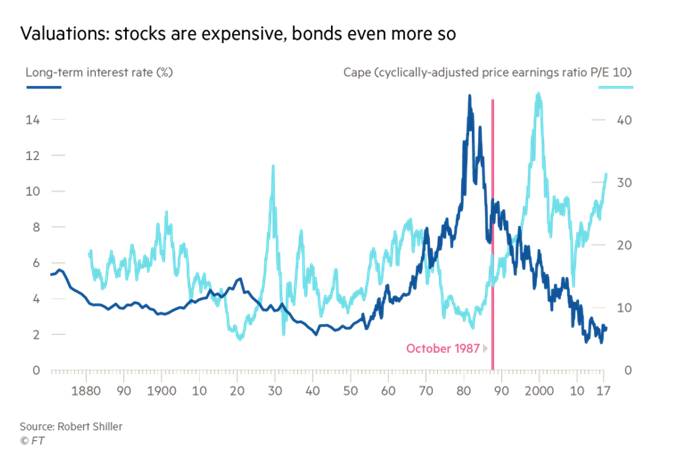 "Whenever you see strategies deployed that automatically sell in a down market, it is reminiscent of portfolio insurance," says David Harding, the head of Winton Capital Management, a big quantitative hedge fund. Few people in today's market remember the lessons of 1987. "People are long on self-belief and short on experience," he says.

These days, Prof Leland worries that portfolio insurance "has gone underground". Banks and hedge funds have stepped in to sell portfolio protection products to the market. "The real worry is that these banks in concert are all going to hedge in the same direction," he says, adding that statistics about aggregate hedging should be made public. "Regulators are focused on whether individual banks are OK, rather than their collective impact on the market."

The other risk factor concerns the structure of the market. Today's market may be more sophisticated and automated, but like three decades ago key elements are largely untested.

New categories of securities, particularly exchange traded funds that now control more than $4tn of assets, play an increasingly large role in trading but are yet to go through a crisis.

There is a perennial worry that a bout of fierce selling, particularly in ETFs indexed to less liquid securities, could exacerbate market losses. The ETF industry argues that these instruments merely reflect rises or falls in the market, rather than prompting them.

Today's market is also much more fragmented. The monopoly that Mr Cashin and other traders at the NYSE once enjoyed has been smashed, with most share trading carried out electronically, often with minimal human intervention. The market is now operated by about a dozen registered national exchanges, 40 broker/dealer-operated trading venues and other trading systems.

"My greatest concern is the lack of a central marketplace," says Laszlo Birinyi, the founder of Birinyi Associates, who saw Black Monday unravel from the trading room at Salomon Brothers.

"Back then it was gut-wrenching, but we could see what was happening. What concerns me today is that a lot of the time we can't see what's happening. There are so many venues and the reporting is so much more difficult. We don't know what's going on in dark pools or in internal trading desks." 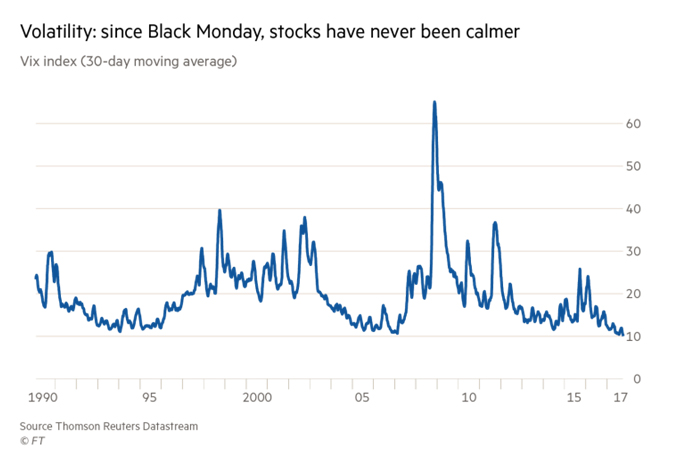 Yet there are also big differences between the situation today and 1987, which may provide insulation against another accident. Among the starkest contrasts is the low level of interest rates. Two weeks before the 1987 crash, Jeremy Grantham, founder of Boston fund management group GMO, was quoted on the cover of a newsletter saying: "Buying bonds at 10.3 per cent and selling stocks is almost a free lunch."

The situation now with bonds is "cosmically different", he says. "What competition do we have now [for equities]? You are lucky if you get any real return in a long bond."

Unlike three decades ago, US investors today are unlikely to feel blindsided by events on the other side of the world. The US market moved lower that Monday in 1987 after aggressive selling in Asia and then Europe, perhaps marking one of the first global sell-offs. In London, where share prices tumbled before Wall Street had even opened, many thought the freak hurricane that hit south-east England the previous Friday had triggered the selling. 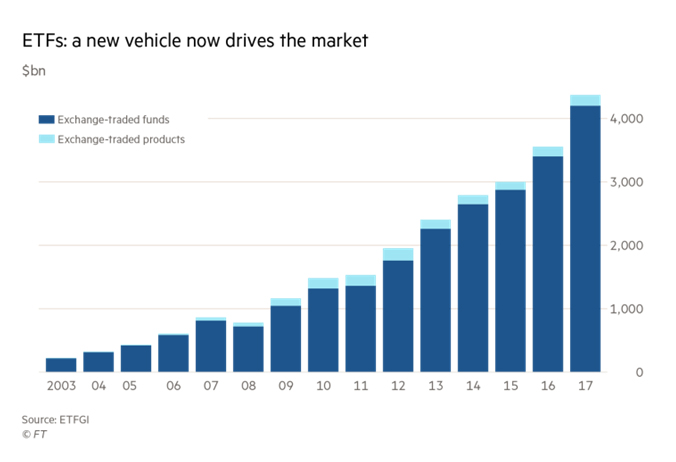 Markets may be even more linked now, but the flow of information is far faster. Kenny Polcari, director at O'Neil Securities but a 26-year-old rookie on the NYSE floor back in 1987, says he was unaware of the market bloodletting around the world until a friend phoned him on the exchange floor at 7am that morning.

"I picked up the paper that morning and [it] was telling me what happened on Friday. Meanwhile there was devastation on Monday in Asia." Now there are any number of news sites, emails, texts, alerts or tweets to let investors and traders know what is happening, often in real time.

Even leading market sceptics, many of whom believe stock prices could start to drop, doubt that another extreme sell-off in equities might be imminent. Partly this view comes from a belief that over-confidence is currently absent. "I don't think the market carries the typical traits of a bubble, which is euphoria," says Mr Grantham. "It is a very strange comparison to old-fashioned euphoria, where they buy houses because houses always go up, or tech stocks in 2000. None of those features exist."

One reason may be that humans may have learnt something from the recent past. Most traders today are aware of Black Monday, and many got their fingers burnt in the financial crisis from 2008. Although the market continues to rally, it has routinely been called the most hated bull market of all time.

According to Tobias Levkovich, chief US equity strategist at Citi Research and another Black Monday veteran: "There isn't this enthused bunch of people who feel the world is their oyster," he says. "The majority of investors are still reluctant and cautious about where the next bogeyman is coming from."