The perils of calling the peak of the equities bull run 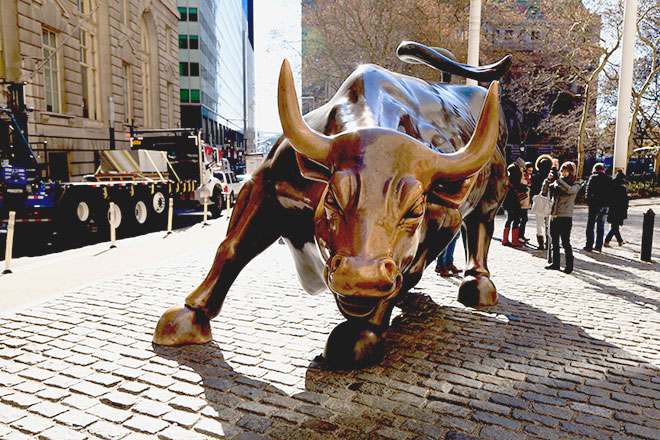 As share prices tumbled on that infamous Monday in October 1987, a chain of dominoes stretching from Tokyo to New York, Tim Hammett was more stunned by the reaction of his new colleagues at an investment fund in the City. The value of household names was collapsing, yet they were cheering. "Out came the drinks," says Mr Hammett, who had just started working at CIN Management, a fund responsible for the pensions of Britain's coal miners.

While they celebrated, the Dow Jones Industrial Average recorded its largest-ever one-day drop, causing panic to deepen in London when markets reopened on Tuesday. At CIN, however, the young investor was allowed to make his first trade for the £10bn pension scheme. "Everyone on the phone, just buy everything, buy everything, and we did," says Mr Hammett.

The fund could pounce because it had spent months moving more than a tenth of its capital out of the equity market, having judged stocks too expensive when compared with bonds.

"We spent, I hate to think how long — it went on for weeks. We bought everything in the market for two or three weeks. And then the market recovered, and we had another celebration," he says.

Three decades later and many investors might be tempted to try a similar trick, as one of the longest stock market rallies in history means share valuations have long been more expensive than when "Black Monday" hit.

The problem is that what worked in the 1980s does not appear to work any more. Bonds are also expensive — their price inflated, like many other assets, by years of extraordinary stimulus measures as central banks have tried to reduce borrowing costs for businesses, governments and consumers.

Stock market pessimists have been left by the wayside, with any dip in prices treated as an opportunity to buy. The long rally has also shown fresh global momentum this year as the MSCI World Index, the broadest possible gauge of shares, has risen in value for eight consecutive months.

Investors who have prided themselves on the rigour of their approach, spurning markets that do not meet long-held definitions of value, find themselves unmoored.

Even Ben Inker, chief investment officer at GMO — the Boston asset manager famous for refusing to buy internet stocks in the late 1990s dotcom boom and calling an asset bubble ahead of the 2008 crisis, has started to think something fundamental may have changed in the world economy.

"Are things going to revert to the old normal? To me that is the biggest question. These markets are really quite different from bubbles that we've seen in the past."

Pension scheme trustees, savers and policymakers, wary of the destabilising results a market plunge can bring, are left with two interrelated issues — whether asset prices can be justified and, if not, what might make them crash.

Judged by a popular long-term valuation measure that compares the worth of a stock market with the average size of corporate profits over the previous decade, the S&P 500 index is deep into bubble territory. "Only twice since 1881 have equities been this expensive," says Russell Napier, founder of the Electronic Research Interchange and author of a book on market downturns, Anatomy of the Bear.

As at the peak of the dotcom boom, the last time valuations were higher, technology stocks have been prominent in sustaining the eight-year US bull market. Five companies — Amazon, Facebook, Apple, Alphabet and Microsoft — are collectively worth $3tn, more than the value of the entire equity market of many countries.

Private start-ups such as Uber, the ride-hailing group, Xiaomi, the Chinese phonemaker, and Airbnb, the rental accommodation company, have also attracted billions of dollars in funding based on more stratospheric valuations.

Looking for signs of fragility, some point to the experience of Snap, the much-hyped messaging app group offered to the public in March, whose shares have since fallen a third below its listing price.

Yet such discernment can also be seen as a sign of a healthy market. When exuberance has become irrational, the reassessment tends to be a sudden jolt — like lights turning on at the end of a party — rather than investors gradually cooling on individual stocks.

Amin Rajan, chief executive of Create Research, pinpoints the UK flotation of Lastminute.com in March 2000 as such a jarring moment. Markets had for years been propelled by initial public offerings of tech stocks, minting fortunes that created a frenzy for whatever might be the next big thing.

Lastminute's IPO fits the pattern of a bubble. On day one shares in the lossmaking travel website, with a business equivalent in size to a pub, jumped almost 30 per cent to a $900m valuation. Then it collapsed. "That for me was the signal the tech boom was over, a total loss of conviction," says Mr Rajan. "A darling of the stock market one day to a pariah the next."

It is hard to pop a bubble of financial exuberance, however, when the predominant investor sentiment appears to be grudging rationalisation of high prices, absent much enthusiasm. Dhaval Joshi, chief strategist for BCA Research, says: "At our client meetings, almost everybody disbelieves that current valuations allow developed market equities to generate attractive long-term returns. Yet many investors are willing to suspend this disbelief, at least for the time being."

The principal explanation for this is the behaviour of the world's central banks, which, in a decade-long effort to fight deflation, have suppressed borrowing costs through very low interest rates and programmes of bond buying, known as quantitative easing.

For bonds, lower yields mean higher prices. For stocks, an environment of slow economic growth and moderate inflation means corporate profits become highly prized: investors buy them less in expectation of rapid growth, but because income of any sort is hard to find. Analysts expect the five big American tech companies to report $109bn of earnings for 2017, a tenth more than the $99bn reported the year before, for instance.

If interest rates remain low for years to come, it will probably mean future investment profits will be lower than in the past, but it also supports the argument that high valuations could be sustained. "There's nothing which makes that an impossible solution," says Mr Inker, who adds there is no law requiring interest rates and inflation to rise.

He says GMO is trying to craft a portfolio that tries to avoid very expensive stock markets but will prosper even if the status quo persists. That involves decisions such as "owning as little as possible in the US, and as much in emerging markets as we can stomach".

So while high valuations increase the chances of a market crash, they are not sufficient to cause one. In a stable economic environment, periods of low volatility, where stock prices show little daily movement, can last for years.

What is required to end the calm is some form of shock. Goldman Sachs has identified 13 occasions since the 1950s when the US S&P 500 has lost more than a fifth of its value in real terms, taking inflation into account — a so-called bear market.

Christian Mueller-Glissmann, a Goldman strategist, says: "After world war two, most recessions are driven by price shocks and central banks trying to tighten to prevent inflation running away." Recession, or some geopolitical event, hits earnings and the valuations investors are prepared to pay.

A foretaste of what that could feel like was provided by the sudden devaluation of the Chinese renminbi in August 2015, says George Magnus, associate at Oxford university's China Centre.

"What markets hate more than anything else is discontinuity," he adds, and the move by the Chinese authorities, without warning or explanation, prompted turmoil in global markets. Fears over the strength of Chinese demand for raw materials translated into tumbling prices for commodities and the stocks and bonds linked to them, reaching a peak in early 2016 as the price of crude oil hit a 12-year low.

Confidence in the competence of the Chinese authorities, and general calm, was restored only after Beijing announced a substantial stimulus programme to boost lending.

A year and a half later the lesson, again, was to use any dip in prices as an opportunity to buy. Look around the world and the threat of recession, or even a substantial slowdown, is hard to find. Venezuela, descending into chaos, is one of the few nations where economists do not expect growth in 2017 and 2018. Projections for the UK economy are less robust than before voters chose Brexit in the EU referendum last year, but economists still forecast further expansion.

For those investors who believe the bull market cannot last, their warnings tend to focus on factors that will aggravate any turn in the business cycle when it does arrive, such as a build-up in corporate indebtedness, and the limited room for central banks to respond.

"Having studied every one of these [bear markets] in some detail, I'm not sure there is a parallel for today. We just don't have precedents for going into a recession with interest rates at this level and inflation so low," says Mr Napier.

Indeed, according to a regular survey of professional investors around the world conducted by Bank of America Merrill Lynch, an error by central banks tops the list of risks to the status quo playing on minds. It comes as central bankers have begun to discuss attempts to normalise monetary policy, by raising interest rates and retreating from bond-buying programmes.

The Federal Reserve will soon stop reinvesting the money it receives when Treasury bonds it holds matures, and the European Central Bank could announce plans to reduce, or "taper", the €60bn of securities it buys each month as soon as September.

A danger of releasing some of the pressure that has held down borrowing costs is that tighter monetary policy chokes off economic recovery. In 1982 a stock market slump coincided with attempts to fight inflation by the Fed, under Paul Volcker. In 1994 Alan Greenspan prompted bond market chaos when he raised rates further and faster than had been expected. US stocks lost about a tenth of their value, before the long tech rally began to take hold.

Pessimists may require patience, however. Mr Mueller-Glissmann sees little evidence for inflation gathering steam. "No one you talk to says they expect 10 per cent inflation in the next decade."

All of this points to the final challenge of preparing for a shock. Pension funds have become less flexible, allocating much of their money to specialists, mandated to buy a particular set of securities, such as us corporate bonds or emerging market stocks. Trustees are advised by consultants with little incentive to suggest taking unusual risks.

Barry Southcott, the man in charge of CIN's stock and bond portfolios in 1987, says the fund had trustees who understood and supported the call to sell stocks. "I think it would be difficult for anybody today. The market is much more short-term than it was then."