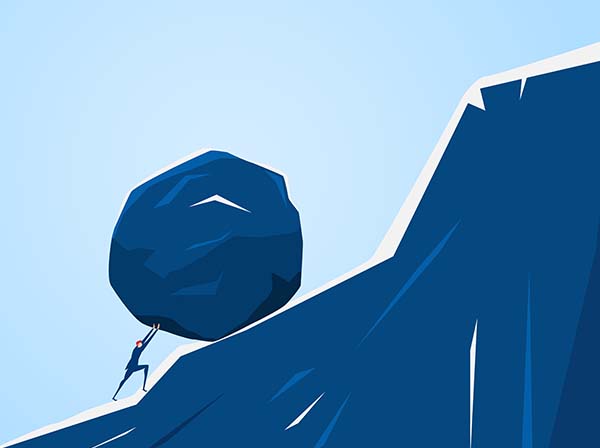 After years of covering quarterly earnings seasons, I am heartily sick of them. The expectations game, as companies talk down their prospects as the earnings announcement approaches, only to spring a “surprise” by beating the lower bar they set for themselves, is an annoying, phoney ritual. Companies frequently sucker those of us in the press into giving them good coverage and sucker investors into buying their shares.

As the process is so predictable, we now have the Lewis Carroll-esque logical impossibility that investors expect to be surprised. Whatever the consensus earnings forecasts for year-on-year growth are, expect a surprise and add on another three percentage points or so.

I am delighted to say, therefore, that this time is different. Far from fall as results for the first quarter of 2018 approach, earnings forecasts for the US S&P 500 companies have shot up.

According to BofA’s Savita Subramanian, consensus expectations for the first quarter have risen by more than 4 per cent in the last three months. This is the most since the crisis; usually, forecasts fall by more than this over the preceding three months.

Brokers are responding to what companies tell them: JPMorgan says more companies have raised their guidance ahead of announcements than ever before. So the game has changed: we enter this season with everyone amping up expectations, not damping them.

There is no mystery about the main reason for the upgrades: it is, of course, the tax cut agreed at the end of last year. Whatever its long-term economic merits, a reduction in the taxes that companies must pay on their earnings straightforwardly increases the earnings that they can share with their shareholders. Exactly how much it adds is a critical question. The estimate by Credit Suisse’s Jonathan Golub that it will add 7 percentage points to growth is typical — and it was in response to the tax cut that markets enjoyed the overdone rally of January that has since been corrected.

But there is more to it than the tax cut. The dollar is weakening, taking many by surprise and flattering the overseas earnings of multinationals to the greatest extent since 2010. The rising price of oil, another surprise, directly boosts the profits of energy companies. Add this all up and brokers are braced for a monster quarter with profit up more than 20 per cent year on year.

Naturally, as they expect to be surprised so positively by earnings, brokers also expect share prices to go up. This is a reasonable expectation — as Bloomberg data shows, 80 per cent of the S&P’s gains in the last five years have come during earnings seasons.

This explains why the stock market has repeatedly tested the lows it set in early February but not fallen lower. With what could be historically good profits in prospect, nobody wants to sell ahead of them. Even if earnings are not quite as good as hoped, the sheer psychological effect could be important. When reminded that things are this good for the corporate world and Corporate America in particular, it feels rather harder to sell. Worries about tariffs and higher interest rates could seem just that little bit less pressing.

But that still leaves room for worry. Earnings per share (which can be boosted by financial engineering such as share buybacks as well as stronger operating profits) really matter to share prices in the long run. Over the last 25 years, through bubbles crashes and an epic credit crisis, share prices and earnings per share have tracked each other almost perfectly.

But can profits possibly continue to outstrip growth in sales? Profit margins have increased hugely over that time, meaning that either consumers or employees, or both, are getting a worse deal — which is certainly how they feel.

Over history, profit margins have reverted to the mean reliably, generally because of the tug between capital and labour. When companies are most profitable, unions have more negotiating clout and claw back some of the extra profits. The proportion of companies complaining of higher wage costs remains remarkably low.

In the last decade, many bears (myself included) have been trapped by expecting profit margins to revert to the norm, only to see them continue to expand in a ways that had not seemed possible. That trend is set to intensify. JPMorgan estimates that net income margins will hit 12.9 per cent next year, triple their level of 1992.

For the long term, this must be a reason for caution about US profits (even if I have been wrong about this most of the time since the crisis). In the shorter term, it does look to me like stocks bear an unduly heavy burden of expectation.

The adverse market reaction to some record profits from the big US banks, which kicked off the results season on Friday, gives an idea of what could happen. And with so many variables in question and causing confusion, there is ample room for big surprises in both directions as companies unveil their accounts. But for a change, the “surprises” might actually be surprising.