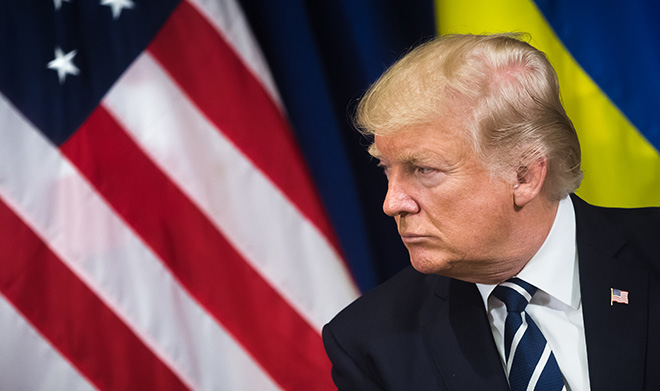 A year after Donald Trump declared a state of "American carnage" on taking the oath of office as the 45th president of the US, his hopes for the economy and asset markets are in great shape.

His boasts about the stock market are absurd, but share prices have had a great 12 months. Moreover, while neither he nor any other president can be held accountable for the performance of shares, he can take a decent chunk of the credit for the rise in Americans' 401(k) balances.

He has done everything he said he would do that Wall Street liked, capped by the tax cut, and left undone the proposals that it disliked. China has not been declared a currency manipulator, Nafta continues, the tax reform excluded the "border tax adjustment" that many saw as a disguised tariff and he has eschewed a shake-up at the Federal Reserve.

Mr Trump also clearly articulated one of the greatest obstacles to his ambitions for the economy and markets, and his words helped ease it. "Our currency is too strong. And it's killing us," he complained before his inauguration. In April he added: "I think our dollar is getting too strong, and partially that's my fault because people have confidence in me. But that's hurting."

Devaluation is seldom a good long-term answer to economic problems. But in this case, the dollar had enjoyed an upswing ever since the financial crisis, and its fall over the past 12 months has helped. US exports are more competitive, diminishing trade tensions; US multinationals' profits look much better in dollar terms; and gains in the stock market look far more impressive.

The main reason for dollar weakness, beyond the decision to eschew protectionism so far, has been the surprising economic strength of the rest of the world, led by Europe. The rest of the world handled the aftermath of the crisis worse than the US did; under Trump, the rest of the world has at last been helping. Providing the world steams on ahead, the dollar should not hamper the US this year. A year ago, investors were positioned for more dollar strength; its weakness has been a huge surprise, but a pleasant one — for the president and many Americans, if not for Europeans.

Mr Trump's greatest risk lies in another market record. As his first year ends, the yield on 10-year Treasury bonds is at its highest for his presidency, and close to breaking a downward trend of more than three decades' duration.

He was right. When they start to move, bond yields can spike quickly. One such spike occurred on the eve of the credit crisis in 2007; another in 1994, after the Fed tightened, helped to trigger the Mexican devaluation crisis.

This need not happen again. As I detailed last week, the forces pushing down on yields and inflation are strong. As rising yields are generally caused by economic growth, they can coexist with rising share prices. But the tipping point when rising yields force equity valuations down may be close.

London's Absolute Strategy Research suggests that, historically, this point comes when bond yields exceed the cyclically adjusted earnings yield (inverse of the price/earnings ratio) on stocks. In the early 1960s, a similar period of decent growth and low inflation, equity valuations ran into trouble once 10-year yields ran above the yields on stocks. Now, that needs the 10-year yield to rise to about 3 per cent from its current 2.64 per cent.

The market consensus, probably correct, is that such a level can be avoided this year. The bond market has already given several false alarms. Meanwhile, with the full impact of the tax cut yet to be felt on corporate earnings, there is more to come from equities. With unabashed optimism showing up in industrial surveys, and anecdotal signs (notably from Walmart) that the corporate tax cut could indeed "trickle down" to beleaguered workers, the stock rally appears still to be in the early part of its last chapter.

That is bad news for Democrats, who hope that Mr Trump's personal unpopularity will deliver them Congress in midterm elections this year. Animal spirits will make opposition gains difficult. But the chance of the president's "very scary scenarios" for bonds arriving before the 2020 election should worry Republicans. These days, according to the Urban Dictionary, "carnage" means "chaotic drinking mayhem" resulting in "the fear" in the morning. The Trump inaugural may foretell market events, but probably not yet.