What the toss of a coin reveals about investment decisions 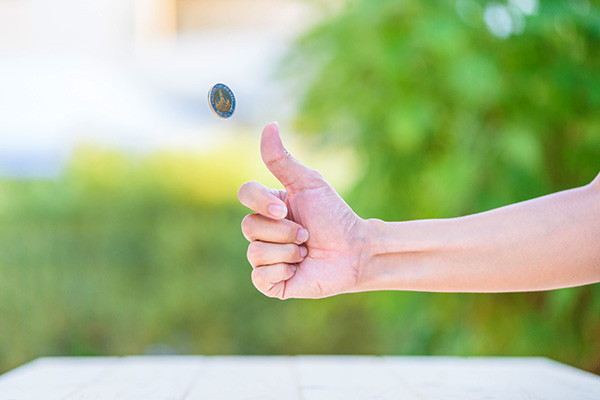 Investment is not a game. People’s life savings are at stake. But games can help find investment strategies that work - and identify our greatest flaws.

The results of a very simplified stock market investing game, run by Victor Haghani of Elm Partners and Richard Dewey now of Pimco, large asset managers, are terrifying. They offered close to a no-lose proposition to volunteers who were either studying finance at business school or working as investors. Most failed to make the most of the opportunity. Each player was given $25 of real money and 30 minutes to place bets on the toss of a loaded coin with a 60 per cent chance of coming up heads. The coin was digital, available on a simple website meaning it was possible to flip the coin about 300 times.

Payouts were capped at $250, to stop the game becoming very expensive for its organisers. Players were not allowed to bet more than they had - so the game was leverage-free - and if their total money ever went to zero, they were out.

The optimal strategy has been in the mathematical literature since 1955, although barely any of the players had heard of it. Known as the Kelly criterion, it holds that you should bet a constant proportion of your money each time. The only other variable, in a repeated game with a known probability, is the probability itself. Double the probability of winning, subtract one, and that is the proportion of your money that you should gamble each time. Your opening bet should be $5. Follow this strategy, and you have a 95 per cent chance of getting to $250. Remove the cap and keep tossing the coin every six seconds for half an hour, and your expected final total is more than $3m.

Now for the results. Most - 79 per cent - failed to reach $250, while 28 per cent went bust. Amazingly, two-thirds bet on tails at least once, despite knowing that it was a substantially less likely outcome. Of the 61 participants, 18 bet everything they had on one toss. Remember they were all either business students or investment professionals. Many started out with discipline, but lost heart later. Many began to suspect the coin was not really weighted in their favour after a run of losses.

How did I do? My opening bet was $5, and I never bet on tails, so I did better than many. But I did not increase my stake proportionately when I started out well, or reduce it when I encountered a run of tails. Then I overcompensated, cutting my stake to $2. Dispirited, and not wanting to admit in an internationally published column that I had gone bust betting on a coin that was weighted in my favour, I stopped trying after 15 minutes, when I was still mired at about $15. I had discipline, but not enough of it, and lacked conviction.

How does this apply to the stock market? It is far more complicated, but in aggregate they have much in common. Over the very long term, stock markets follow economic growth, but give you a very real chance of losing money in the short term. Their excess of return over risk for the past 50 years is 0.33, according to the Elm researchers, against 0.2 for the 60 per cent loaded coin.

The extra complexities come from the underlying nature of the economy and corporate life. Your chances may average 60 per cent, but will differ according to economic conditions and behaviour of different companies. These factors even out long term, but do make stock investing more than a toss of a coin, which is why huge amounts of money are poured into researching them.

Also, in the coin-toss game, you play each game in isolation, unaffected by the results of others. In the stock market, the mistakes of others affect the game you are playing, creating risks and opportunities. If others lose conviction, or get caught up in waves of emotion, or go out of business altogether, they affect prices available to you.

In particular, the errors in the coin-toss game show how the momentum strategy (betting on stocks that are winning to keep winning), and the value strategy (finding stocks that have gone out of fashion and have become too cheap due to neglect) can work.

If you are prepared to do some work and add a layer of complexity, to take advantage of the opportunities available elsewhere, you can adjust the money you put in each time to take account of changes in probabilities caused by the economic weather. Or you can try to take advantage of your competitors' fallibility by playing value or momentum.

But in the long run, stock market investing is very similar to taking continuous flips with a coin loaded slightly in your favour. Repeat often enough, with sufficient discipline, and you will do well. And maintaining discipline is quite hard enough. As I can attest.