Online access to your accounts will now be available through a new online platform called Credential Online.

Please complete a few steps to set up access to the new platform.

The cost of insuring against the default of some of the world’s biggest corporate borrowers has dropped to its lowest levels since 2007, as investors bet that continued strong support from central banks will keep credit markets ticking over.

The CDX North American Investment Grade index, which reflects the cost of default protection on bonds issued by 125 US companies, fell to 43.81 basis points last week, implying a premium of $4.38 to insure a $1,000 portfolio of bonds. That was its lowest level since July 2007, according to index provider IHS Markit. The index has since nudged higher to 44.62bp but remains near historic troughs.

An equivalent index tracking a group of European credit default swaps dropped to 41.26bp on Monday, also its lowest level since November 2007.

“The market is being driven by monetary policy expectations. Everything else is taking a back seat,” said Gavan Nolan, director of credit research at IHS Markit. “A lot of companies have taken advantage of the easy money available and lengthened the maturity of their debt, which leaves default risk low.”

Investors have been unnerved in recent weeks by the potential impact on the global economy caused by the coronavirus; fears that caused the CDX index to climb to more than 50bp on January 31.

But many have since been soothed by dovish noises from both the US Federal Reserve and the European Central Bank, which are committed to keeping interest rates low for the time being while revving up bond-buying programmes to ensure a ready supply of cash. The Bank of Japan, too, has indicated that it is ready to cut rates further into negative territory if inflation remains well below its target. 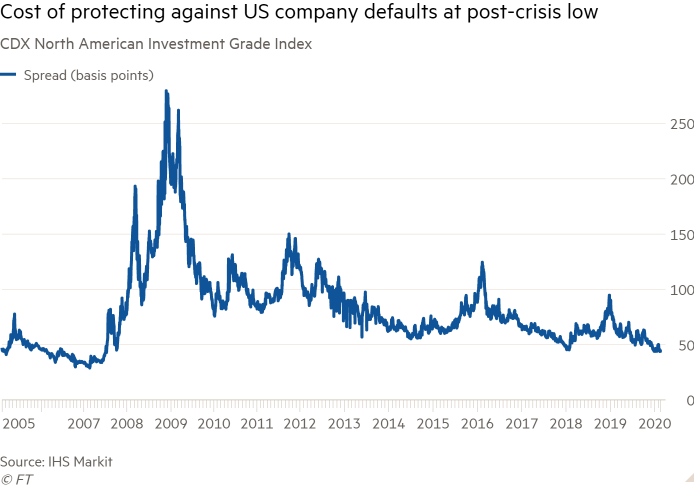 Credit default swaps were originally designed to help investors protect against a company failing to pay back its debts, offering to make them whole in the event of a default. The higher the index, the higher investors’ expectations of missed interest payments.

The market has shrunk significantly since its heyday, reflecting declines in trading activity by big banks on Wall Street and concerns from regulators over potential market manipulation.

Data collected by the Bank for International Settlements show that global CDS markets have fallen from a high of just over $60tn in notional amounts outstanding in 2007 to under $8tn at the end of June last year.

But the tool can be a cheap way to bet on corporate creditworthiness because the derivatives require just a fraction of the value of the trade to be paid up front. Selling CDS is akin to buying a bond, because investors are entering into a contract that profits if the company does not default.

One credit derivatives trader said the CDX index’s recent move lower had been driven in part by the strong investor appetite for corporate bonds.

“The CDS indices are used as place-holders,” said the trader. “If there aren’t enough individual corporate bonds to buy then people sell CDX. There are a tonne of people that want to buy corporate credit and it is driving the index lower.”