Global equities ended the week broadly lower. The NASDAQ Index declined nearly 3%, thanks mainly to a more hawkish U.S. Federal Reserve, and due to investors reassessing the growth outlook for the most crowded bets in technology stocks. Broad weakness globally was also driven by a significant rise in COVID cases, with capacity and travel restrictions increasing and uncertainty around the transmissibility of the Omicron variant taking a greater hold.

Yields moved lower as worries around Omicron escalated. The European Central Bank suggested that it is unlikely to hike rates in 2022; this further spurred a more favourable environment for fixed income assets. The Bank of England surprised the market and was the first developed nation to raise rates after hiking its policy rate by 15 basis points to 0.25%.

Oil prices dropped and posted their seventh weekly decline in the past eight weeks. Prices fell this week due to concerns around demand impact from the Omicron variant and from more hawkish central bank stances. The latter also pushed gold prices higher, which were further helped by broad capital flows leaving risk assets in favour of safe havens. 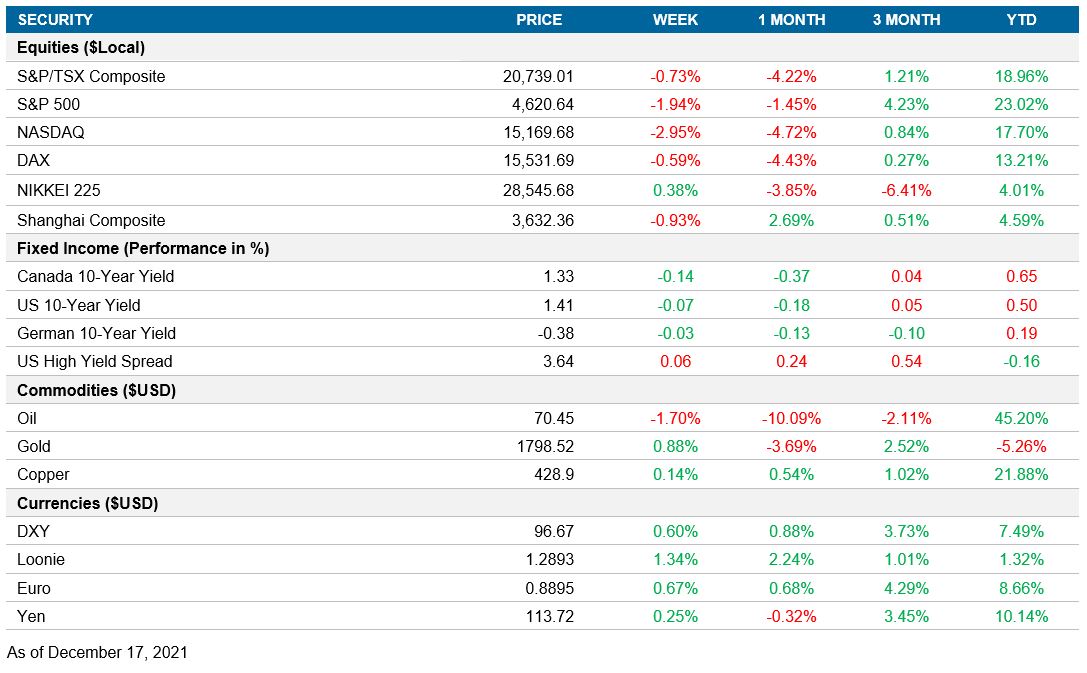 The Bank of Canada renewed its mandate with the federal government, with the primary objective to maintain a 2% inflation target for the next five years, while promoting efforts to achieve “maximum sustainable employment.” The BoC will use a broad range of labour market indicators to assess when this employment level is achieved, and will use its monetary policy tools to boost employment levels as long as its efforts don’t hinder stable prices. The BoC can keep inflation within a 1%–3% control range, though medium-term inflation expectations must be anchored to 2%.

The consumer price index in November rose 0.2% month over month and 4.7% year over year. The monthly rise was down from a 0.5% increase in October. A core inflation measure, CPI Common, posted a 0.2 percentage point increase, suggesting that inflationary pressures are broadening. Transportation and shelter prices continued to post significant gains, while durable goods also saw notable price appreciation, notably in vehicles and furniture. These price gains were partly driven by issues with supply chains, which also pushed food prices higher.

Retail sales in November rose 0.3% month over month, down from 1.7% in October, and below consensus estimates of a 0.8% rise. Gasoline sales rose 1.7%, while building materials, clothing, and sporting goods all saw material gains as well. The weakness in headline retail sales was driven by electronics and appliance stores, which were down 4.6%, general merchandise sales, which fell 1.2%, and online sales, which were unchanged. After accounting for the large jump in October, real consumption is estimated to rise nearly 5% annualized in Q4/2021. Moving forward, macroeconomic observers are watching for possible signs that fading fiscal support, surging prices, and the rapid spread of the Omicron variant might dampen consumer spending.

The Federal Open Market Committee meeting went mostly as expected. The Fed announced that it was accelerating the rate at which it was tapering its asset buyback program, to US$30B per month. The Fed was previously reducing its asset purchasing program by US$15B per month. Updated projections put the number of potential rate hikes in 2022 at three, followed by as many as four rate increases in 2023, all of this to combat inflation that has surged to a near 40-year high. Also, the policy statement dropped any reference to inflation as "transitory," with the Fed acknowledging that price increases had exceeded its 2% target "for some time."

Industrial production increased 0.5% month over month, slightly below expectations of a 0.6% rise. This was a drop from the 1.7% rise in October. The motor vehicles and parts segment continued its strong recovery, rising 2.2% month over month. Electric utilities on the other hand were an area of weakness, posting a decline of 1.9%.

Lastly, we had the preliminary results from the Markit purchasing managers’ index survey. The Index fell to 57.8 from 58.3 in the previous survey. This is the lowest survey reading since December 2020. New orders fell to 56.3, versus 56.9 previously. Suppliers’ delivery times also rose relative to the prior month, the highest reading since May 2021.

Chinese retail sales growth in November dropped to 3.9% year over year, down from 4.9% in October, and below consensus estimates of 4.7%. In seasonally adjusted terms, retail spending edged down to 1.3%, from 1.4% month over month previously. A resurgence of COVID-19 cases was a key driver of the weakness. Consumers have grown more cautious as infections have spread to 21 provinces. Virus outbreaks have also caused weakness in the labour market, which consequently affected retail sales.

Chinese industrial production meanwhile continued to rebound from the prior month when power shortages caused disruptions. Industrial production rose 3.8% year over year, above estimates of a 3.7% rise, and above the 3.5% rise in October. Output growth held steady at 0.4%, reflecting stronger exports and recovery in heavy manufacturing. However, investment in infrastructure and real estate continued to soften.

The ECB confirmed that it will continue its asset purchases until at least October 2022, though it will halve the pace of monthly purchases by April 2022. The central bank also left its rate guidance unchanged. This implies policy rates will remain at current levels until there is a sustained rise in inflation throughout its forecast horizon, which runs until 2024.

The BoE unexpectedly raised interest rates, becoming the first major central bank to hike its benchmark rate since the pandemic began. The rate was lifted 15bps, to 0.25%. BoE policymakers indicated further “modest” tightening is needed to curb inflation, which has hit its highest level in more than a decade.

Eurozone Composite PMI fell to 53.4 in December, coming in below estimates of 54.4, and down from 55.4 in November. This marked a nine-month low for the Composite PMI as tighter restrictions due to COVID-19 and consumer caution weigh on economic activity. Within the Composite, both Manufacturing and Services PMI fell, with the latter seeing a bigger drop. Additionally, the surveys indicated that inventories rose to a record high and the pace of lengthening of delivery times is slowing, which should suggest an impending easing of supply chain shortages.

The Bank of Japan kept its policy relatively unchanged. The BoJ opted to extend assistance to small and medium enterprises (SMEs) for another six months until September 2022, while expectedly paring back help for bigger firms from April 2022. The decision to keep up stimulus for SMEs comes on the back of rising concerns around Omicron and with core inflation stuck at near 0%, a contrast to surging consumer prices in several other developed economies.

Canadian retail sales for October will be released. Over recent periods, spending on motor vehicles (especially used cars), furniture, and home furnishings have been particularly strong.

Monthly GDP for October will be released. Estimates are for 0.8% month over month, and 3.6% year over year growth.

Consumer confidence will be carefully assessed considering broadening inflation pressures and concerns around the Omicron variant. An offsetting factor is the moderately strong assessment of the labour market that consumers have persistently expressed in previous months.

Weekly Market Pulse will be on pause for the holidays and will return Jan. 10, 2022. Happy Holidays!