Equities: The S&P 500 ended the shortened holiday week up 1.5% and closed above 4000 for the first time since September, while the Nasdaq still sits below the key 12,000 level. Markets will focus on consumer spending as Black Friday kicked off the holiday shopping season.  Best Buy and Abercrombie beat on earnings and although we’ve seen strong 3Q earnings, the overall outlook remains cautious as consumers are pressured by a higher cost of living. Total holiday shopping is expected to be up 2.5% this year compared to 8.6% a year ago and retail stocks will be a key sector to watch around year end as they have historically moved +/- 3% over the last 10 years.

Fixed income:  The US 10yr rate continued to move lower this week as the minutes from the November FOMC meeting showed most officials agreeing that a slowing of rate increase will soon be appropriate.  The target rate will increase for the sixth time this year bringing rates to 3.75-4%, and market still expect rates peaking at ~5% in 2023.

Commodities: Crude oil continued the move lower to ~76.28, finishing the week down 4.75% and down ~14% over the last two weeks as Asian crude consumption fell to a seven-month low, further impacting the already weak demand outlook driven by rising Covid cases in China triggering lockdown-like restrictions. 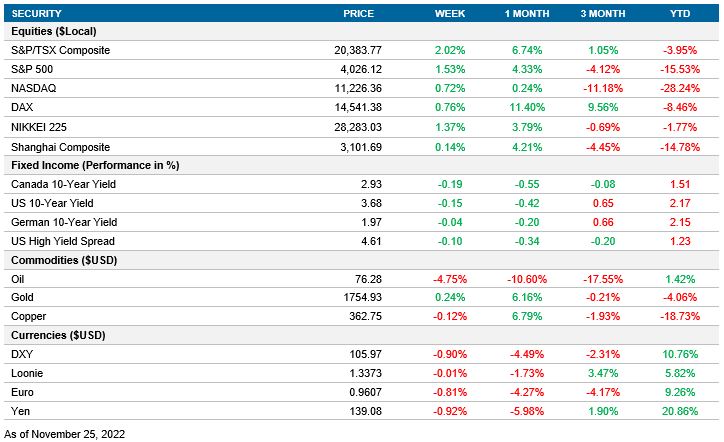 Preliminary Canadian retail sales show a potential 1.5% increase in October after a drop of 0.5% month over month in September. September’s drop was broad based as 7 of 11 subsectors fell, led by -2.4% decline in gas station sales due to the ~7.5% drop in gas prices. Furniture and clothing stores saw an increases of 1.4% and 1.5% respectively.

U.S manufacturing PMI dropped to 47.6 in November compared to the 50.4 we saw a month before and below the estimates of 50. We saw output fall and a decline in new orders as demand was negatively impacted by inflation and continues economic uncertainty. On the other hand, companies signalled the first improvement in supplier performance since October 2019.

Euro Area’s PMI increased to 47.3 in November compared to 46.4 in October and came in above market expectations of 46. This marks the fifth consecutive month of falling factory activity, even as the rate of production decline eases. New orders were down by a smaller amount, backlogs of work declined, and payroll growth was subdued. Input prices rose by the lowest margin since December 2020 as the supply chain situation improved and demand weakened, selling price inflation eased.

Preliminary UK manufacturing PMI remained at 46.2, unchanged from a month ago and ahead of market estimates of 45.8. Manufacturing production declined at a lower rate as easing supply chain issues supported output. Manufacturing companies lost the most jobs since October 2020, as the outlook for growth continues to deteriorate. From a price perspective, both input and output costs have showed signs of cooling off.

During the week, we will have the two most crucial growth indicators that will give the market a perspective on how the Canadian economy is growing in a contractive monetary policy environment. On Tuesday, Statistics Canada will release the Quarterly GDP Annualized for the third quarter. Following last quarters growth of 3.3%, it is expected that the Canadian economy will suffer a sharp slowdown, with a forecasted increase of 1.4%. On Friday, Statistics Canada will release November’s employment report. After a surprising 108k Net Change in employment, the market consensus is that the labour force will expand at a rate of 10K monthly workers.

The U.S. Bureau of Labor Statistics will publish October’s Job Openings and Labor Turnover Survey (JOLTS). The expectation is that the job openings decrease to 10,350k from 10,717k, reflecting a slowdown in the job market. To complete the picture of the U.S. labour market, the Bureau of Labor Statistics will also publish November’s Job report. The market consensus is that the change in nonfarm payrolls will continue with its negative trend, decreasing to  200k from 261k in October.

Japan’s Ministry of Internal Affairs and Communications will release October’s labour report on Monday. The unemployment rate is expected to remain at 2.5%, as in the previous seven months, oscillating in the 2.5% - 2.6% range.

The official and private China PMI indexes will also be released. They are expected to continue in negative territory (under 50), confirming the deceleration of the Chinese economy. At its latest reading, China’s S&P PMI rose to 49.2, a 1.1 rise from the 4-month low of 48.1 seen in September and a tick above the 49.0 estimates.

By the end of November, Eurostat will release its preliminary CPI and unemployment figures. After a historically high inflation rate, the market consensus is that the contractive monetary policy of the ECB will start to impact the price expansion, decreasing the YoY to 10.4% (from 10.7% in October). On the other hand, the European job market remains tight. So, the consensus forecast is that the unemployment rate will remain constant at 6.6%.