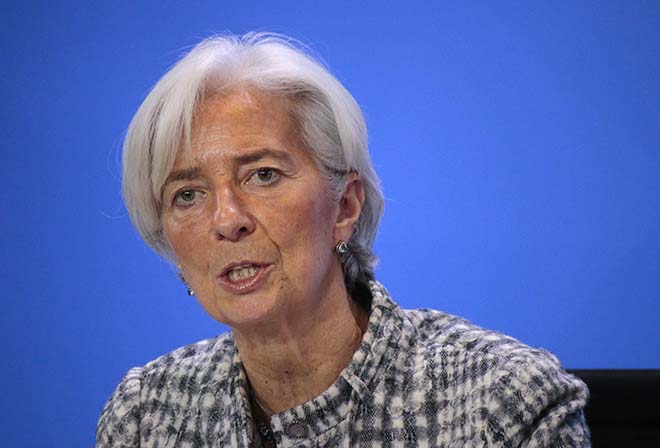 A pall has descended over the global economy in recent weeks. Threats appear more pressing. Activity has slowed almost everywhere. And markets have been febrile. There are still grounds to believe this is just a soft patch, but also reasons to be more concerned.

The possibility that recent data indicate just a temporary dip has not reassured influential voices in the economic debate. Christine Lagarde, managing director of the IMF, has begun to warn global leaders not to assume that the rapid growth of 2017 will return soon. Across the world, “risks are beginning to materialise”, she says.

Growing concern at the fund and among many economists stems from their failure this year to foresee the weakening economic figures in developed and large emerging economies.

The third quarter, for which detailed figures are now being published, was worse than expected almost everywhere. The German economy slipped 0.2 per cent between June and September, the first contraction in Europe’s largest economy since 2015. Japan’s GDP dropped 0.3 per cent. Although the other leading economies grew, most of the activity rates were worse than expected. The eurozone growth rate of 0.2 per cent in the third quarter was the slowest since 2014. The Chinese growth rate fell to its lowest level for a decade and even in the US, where GDP rose 0.9 per cent aided by tax cuts, this was slower than the second-quarter rate of 1 per cent.

For the full 2018 calendar year, forecasts have been scaled back by the world’s leading economies after a heady start to the year when economists expected the momentum from 2017 to guide the outlook.

“The global growth rate clearly peaked late in 2017, since when there has been a noticeable reversion to the mean,” says Gavyn Davies, Fulcrum Asset Management chairman. The global data emerging suggest the growth rate has declined from a peak close to 5 per cent at the end of last year to about 3 per cent now, a little below what might be considered a normal rate of 3.7 per cent, he adds. 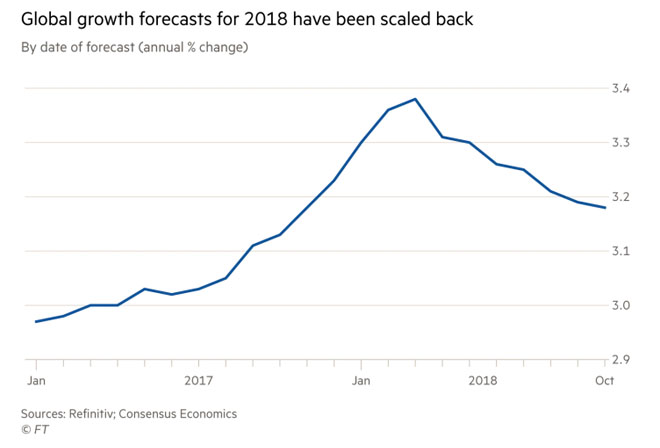 This mood has been reflected in equity price volatility. Falls in global stock prices in October took more than 9 per cent off the MSCI World Index. A sudden drop in oil prices cut the cost of a barrel of Brent crude from $86 to $67 in little over a month. With these signals that spending and activity growth is slowing, forecasts for the global economy in 2019 are being marked down.

In a recent report on the likely trends for next year, Madhavi Bokil, a vice-president of Moody’s, said: “Growth in advanced economies will slow but remain solid in 2019, while G20 emerging markets growth will remain weak”. She added that the world’s two largest economies, China and the US, will lose momentum next year.

The question puzzling economists is whether this slowdown is temporary or long term. On the one hand, they say, it is easy to point to idiosyncratic reasons for some of the most surprisingly bad recent economic data. Germany’s powerful auto industry was stymied by an inability to meet new regulations, leading to factory closures in September. Japan’s third quarter contraction followed several natural disasters.

Monetary policy is credited with causing some of the slowdown. In response to gently rising inflationary pressure, the US and UK central banks have been increasing interest rates, while the eurozone prepares to end quantitative easing at the end of this year.

That said, there is increasing concern among economists that something nasty lies behind the outbreak of weak economic data in so many countries.

"The question is whether this slowdown is temporary or permanent".

One culprit appears to be the increase in trade tensions from the US administration’s aggressive stance this year. With Europe consumed by a separate dispute between the new populist Italian government and the European Commission, the EU executive, over the degree to which Rome should loosen fiscal policy, it is not surprising there has been a chill in business confidence reported across the world.

The JPMorgan Global Composite PMI indicator of business activity fell to its weakest level in two years in September and only ticked up modestly in October.

And despite the talk of fourth industrial revolutions and almost daily technological breakthroughs in artificial intelligence and autonomous vehicles, productivity growth in almost every leading economy has failed to recover to the rates seen before the financial crisis. While that has helped employment recover rapidly, it has left living standards trailing.

It is with this need for a new spur to global activity that leaders are gathering for the G20 summit in Buenos Aires. Without a crisis on their hands, they are unlikely to change global economic policy. But they will be warned that the outlook is darkening and that they will need to prepare for a bumpier 2019.