The big test for bond bears lies in real yields 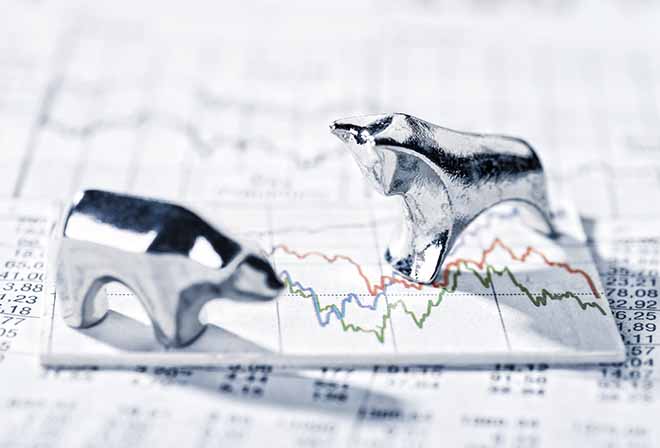 Here we go again. Long-dated Treasury bonds on Tuesday had their worst day since the “Vixmageddon” explosion of volatility in early February, with the 10-year yield surging to 3.05 per cent. It touched 3.07 per cent on Wednesday.

Once again, longer US yields are threatening levels that have stayed in place for the better part of a decade. Why?

It is not because of any great reassessment of inflation threat. Inflation breakevens have edged up slightly during the recent move higher in yields, but this latest rise is all about real yields, not about accounting for rising inflation expectations.

The 10-year real yield, with the breakeven inflation forecast subtracted from the actual yield, was at 0.92 per cent on Wednesday, a whisker away from its highest point for the year, which is also its highest point for the decade. This is the single most critical measure of the degree of monetary tightening. A 1 per cent real yield would still be very low in historical terms, but it has not been seen since 2010. This looks like an opportunity to test whether there is appetite to tighten US conditions to this extent.

This move was also concentrated in the long end, a “bear steepener” in bond market argot, in a shift from the trend that has seen shorter yields rise faster over the past year. This move has been more specific to the long end. 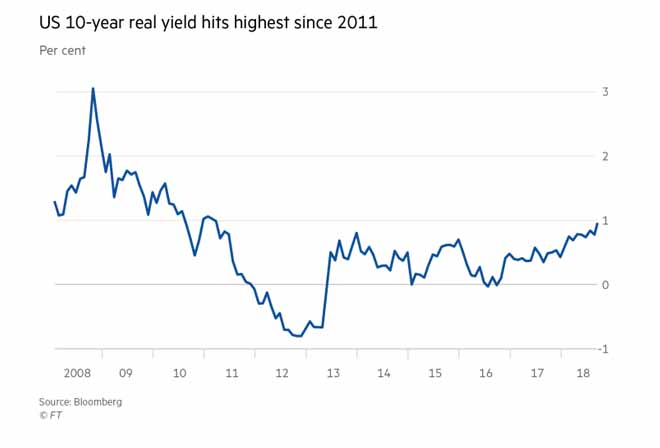 Broader international shifts cannot be blamed for higher US yields, either. The rise in the US this week has far outstripped that for all other major developed markets. The spread of 10-year Treasuries over Bunds, which widened very sharply at the start of the year before settling into a range, has widened sharply in the past two weeks, and is now again close to the 2.6 percentage points it hit in May.

This is the widest such disparity since the adoption of the euro. Even when European yields were widely negative, the gap was not this wide — and so the upward pressure on the dollar looks likely to continue. But plainly there are specific factors now moving the US.

So what is going on? One element is the hardening of sentiment that the Federal Reserve will push ahead with two more increases in base rates before the end of the year. Two more rate rises for the year are now seen as an 80 per cent shot, while the odds of more rises next year are also rising, even if they lag the Fed’s own projections in its dot plot.

There is an outside chance that the Fed could choose to water down expectations at next week’s meeting. But that is unlikely. The critical factor will continue to be the US employment market. If the rate of average hourly earnings picks up from the 2.9 per cent recorded for last month, it will be hard for the Fed to step back from monetary easing, and therefore also hard for bond yields to reduce.

For this week, the story is a technical one. Corporate pension funds can invest money pre-tax. If they wanted to buy bonds and gross up for tax at the 35 per cent rate that held before last year’s big tax cut, rather than at the new 21 per cent rate, they needed to buy their bonds by the end of last week. More or less anyone in this category who foresaw a need to buy long-dated bonds before the end of the year, therefore, would have brought forward the purchase if at all possible.

The surprisingly low yields of August could have been driven by purchases that effectively borrowed from future demand. In terms of yield, a pension buyer could “overpay” by as much as 80 basis points, and still be glad to have made the purchase before the new tax rate came into effect.

That technical factor appears to be, by far, the best explanation for the sudden US-centric rise in yields this week. But the upshot is that we are now going to see a delayed test of whether long-term real yields can rise above 1 per cent (where they have not been this decade), and whether the 10-year yield can stay above 3 per cent.

If they can do this, then the long-nurtured worries that US bonds could sell off in disorderly fashion would return.

With the Fed now apparently more committed to raising rates, and continuing with its programme of “quantitative tightening”, which involves steady sales of bonds on to the market, while the incoming US data strongly suggest that yields and interest rates will need to keep rising, the momentum behind rising yields looks strong.

After the test for the bond market, could come the test for the Fed and for assorted politicians. In the US, the White House has made clear its dislike of higher interest rates, and that distaste could deepen in the weeks before the midterm elections. In the emerging world, higher US rates would add to the pressure on currencies, and intensify the risk of crisis, thus putting pressure on the Fed to desist.

But attempting to work through political game theory like this is premature. We need to know whether the Treasury market can live with real 10-year yields of more than 1 per cent. From that test, much else will follow.