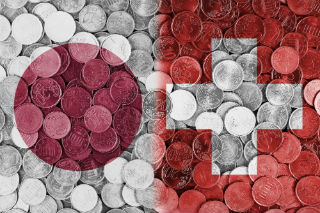 As tension between the US and China spill over to currency markets, Swiss and Japanese policymakers are coming under increasing pressure.

The US Treasury’s decision this week to label China a currency manipulator after the People’s Bank of China let the renminbi weaken to beyond Rmb7 against the dollar sent assets viewed as havens surging to new highs.

Gold, which tends to rise as global growth concerns deepen, has risen 14 percent since the start of the year.

Haven currencies are motoring. The yen is the best performing leading currency in 2019, notching up nearly 3 per cent against the dollar, which traded as low as ¥105.90 at the start of the week.

The Swiss franc is at its strongest level against the euro since June 2017, with the common currency sinking to SFr1.0862 on Monday.

Both the Swiss National Bank and the Bank of Japan have a history of stepping in to currency markets when their respective currencies are surging.

Paul Hui, JPMorgan foreign exchange strategist, said the escalation of the US-China trade war would “reinforce, extend and intensify the dominant global macro dynamic [in] FX markets”. That would lead to more strength for currencies such as the yen and the franc. 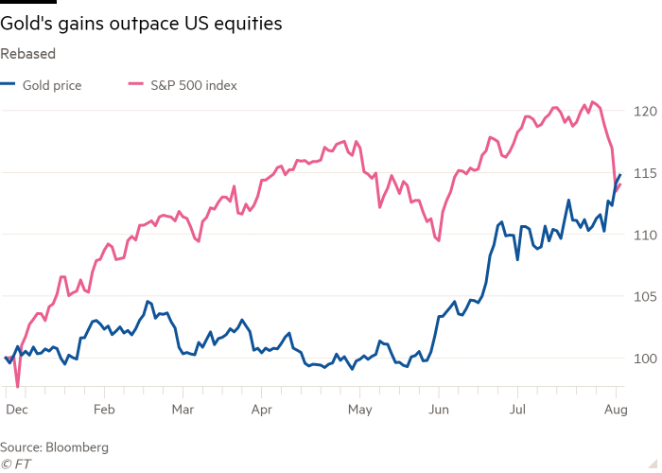 Adriel Jost, head of economics at Zurich-based consultancy Wellershoff & Partners, said China’s decision to allow the renminbi to weaken further raised uncertainty about the outlook for the global economy, which in turn led to strong demand for the franc “and likely led to further SNB interventions”.

Data from the central bank suggest that, in the past two weeks, the SNB has started selling the franc to cap its appreciation, for the first time in two years.

Mr Jost said: “The move by the Chinese authorities will further ignite the worldwide blame game related to currency devaluations. The SNB cannot avoid to be part of this game.”

The escalation of the trade war, together with accelerating global growth worries, suggested that appetite for the franc and the yen was likely to persist. But, amid the attention around “currency manipulation” and the threat of currency wars, policymakers are facing tough choices.

They can either act to weaken the currency, by cutting rates or intervening directly in markets, or else allow the currency to strengthen further and risk damaging the domestic economy.

“Japan is in a world of pain, but the central bank has been sitting on the sidelines all year and just recycling language from last year as if nothing has changed,” said Ed Al-Hussainy, Columbia Threadneedle currencies analyst.

The US Federal Reserve cut interest rates for the first time since 2008 at its meeting in July while the European Central Bank signalled that it stood ready to start easing monetary conditions, possibly as soon as September.

Trade tension between the US and China, meanwhile, has flared up.

“This backdrop suggests that . . . currencies like yen and the Swiss franc should be bought,” said Hans Redeker, global head of foreign exchange strategy at Morgan Stanley.

Yet Japanese policymakers, who were once at the forefront of innovative policy measures such as quantitative easing, have remained cautious. 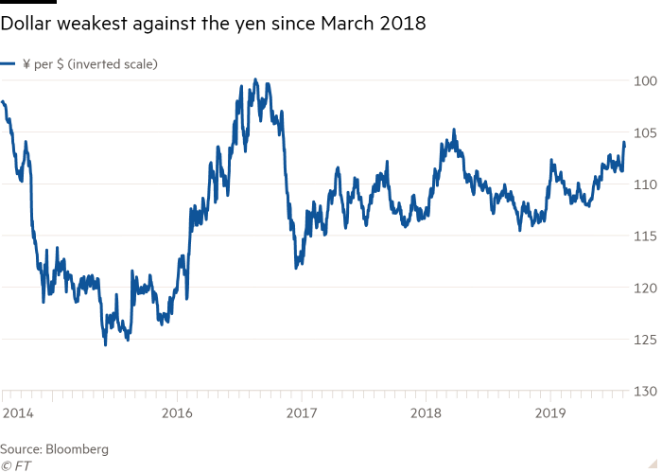 As other central banks act, the BoJ seems to be standing still. The yen approached the ¥105 level on Monday, leaving traders to wonder if the BoJ might consider intervention next.

The BoJ last intervened in currency markets in 2011, as part of a co-ordinated effort with the ECB and the US.

Mr Al-Hussainy said the lack of pushback so far against the strengthening currency was “very odd”, as in the past the ¥105 level has been considered a level that the central bank would defend. “Maybe the pain threshold has changed, maybe it’s not ¥105 any more but now they’re looking at the ¥100 as an important level,” he said.

The wild card is the possibility that the US will intervene to weaken the dollar, if the trade war morphs into a currency war between the US and China.

As analysts expect the renminbi to weaken even further towards Rmb7.5 against the dollar by next year, the chances of such an outcome are rising, according to JPMorgan analysts.

“While not my base case, the prospect of a US-China currency war is worrying and has risen in probability,” said George Efstathopoulos, a portfolio manager at investment manager Fidelity International. “I expect demand for safe havens to persist [and] both the Japanese yen and gold should benefit if the situation escalates.”