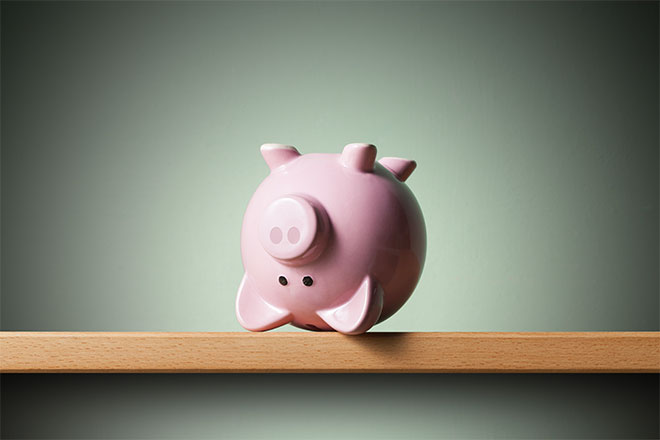 One of the financial markets’ most reliable indicators of a coming recession is spooking investors again, ahead of a new reading on US employment that could determine whether the Federal Reserve cuts interest rates this month.

The yield curve, which shows interest rates on bonds of varying maturities, has now been inverted for a full month, cementing a dour outlook for the US economy, and the extent of the inversion deepened on Wednesday as markets digested a new round of weak economic data.

Sliding long-term interest rates suggest economic weakness is approaching, and the yield on the 10-year Treasury bond has fallen sharply below that on the three-month government debt. The gap between the two is closely watched by investors and policymakers, and at 26 basis points on Wednesday it is back close to its most negative level of the year.

“I think rates are telling us that something is brewing in the economy,” said Tom di Galoma, managing director at Seaport Global Securities. “Any time the yield curve inverts it is a pretty good recipe for a recession.” 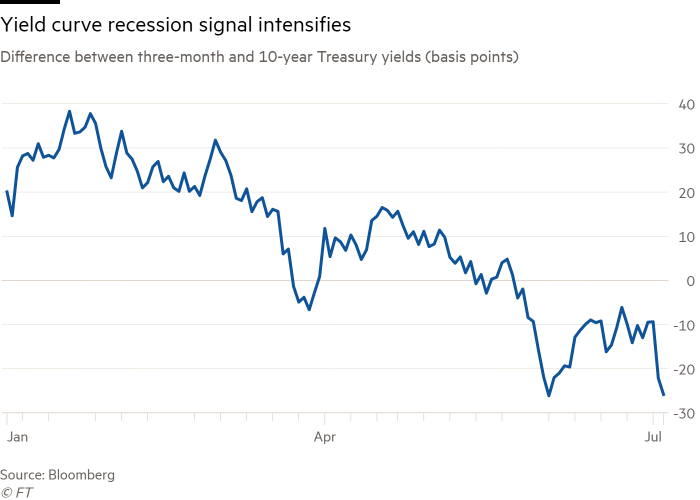 The gap between three-month and 10-year yields has been negative before every US recession of the last 50 years. Equity markets, which are still hitting record highs in the US, are typically slower to respond to the potential for an economic downturn.

The S&P 500 equity market benchmark closed at a record 2,995.82 at the end of a truncated pre-Independence Day trading session on Wednesday. “This divergence between stocks and bonds is unsustainable,” said Subadra Rajappa, head of US interest rate strategy at Société Générale.

When markets reopen on Friday, investors will have the benefit of seeing the latest monthly jobs report, which is released at 8.30am New York time. The Friday data could strengthen or weaken the case for a cut as soon as its meeting later this month.

The report for June follows a dramatically weaker than expected number for May, which increased investors’ expectations for the Fed to cut interest rates. The consensus of economists’ forecasts is for payroll growth of 150,000 across the public and private sectors, a rebound from 75,000 jobs in May. The US unemployment rate is expected to be steady at 3.6 per cent.

Data from ADP on Wednesday showed slower than expected jobs growth in the private sector, adding to disappointment of weak manufacturing data from Monday. The gloomy picture pushed the benchmark 10-year Treasury yield down 2 basis points to 1.95 per cent, its lowest level since November 2016.

Nonetheless, investors have pulled back their bets on early, aggressive monetary policy easing by the Fed. That has pushed three-month Treasury yields higher, intensifying the yield curve inversion.

The bond market rally has continued even though the US and China promised to return to the negotiating table over tariffs. Investors are nervous that drawn out discussions will prolong the pain for US manufacturing.

“A trade truce is just an optimistic way to note that tensions remain elevated, progress slow, and huge uncertainty remains — all of which will continue to restrain investment and economic activity,” said Jon Hill, an interest rate strategist at BMO Capital Markets.