Stocks declined following hawkish Fed meeting minutes, which highlighted the urgency of moving monetary policy “towards a neutral posture expeditiously.” The minutes confirmed Fed appetite for a 50 basis-point hike, which was only avoided at their last meeting due to uncertainties tied to the Russia-Ukraine war. Markets are now pricing in as many as 9 more hikes for the year.

Yields rose sharply following the aggressive Fed minutes. The Bank of Canada will meet this week, with markets expecting a 50 basis-point hike. Canadian inflation continues to rise and the unemployment rate is at a record low. The European Central Bank will also meet, which could provide more insight on timing of its asset purchase wind-down.

Oil prices declined for a second week as the International Energy Agency’s member countries agreed on a coordinated release of reserves, following the record release announced by the U.S. just the previous week. 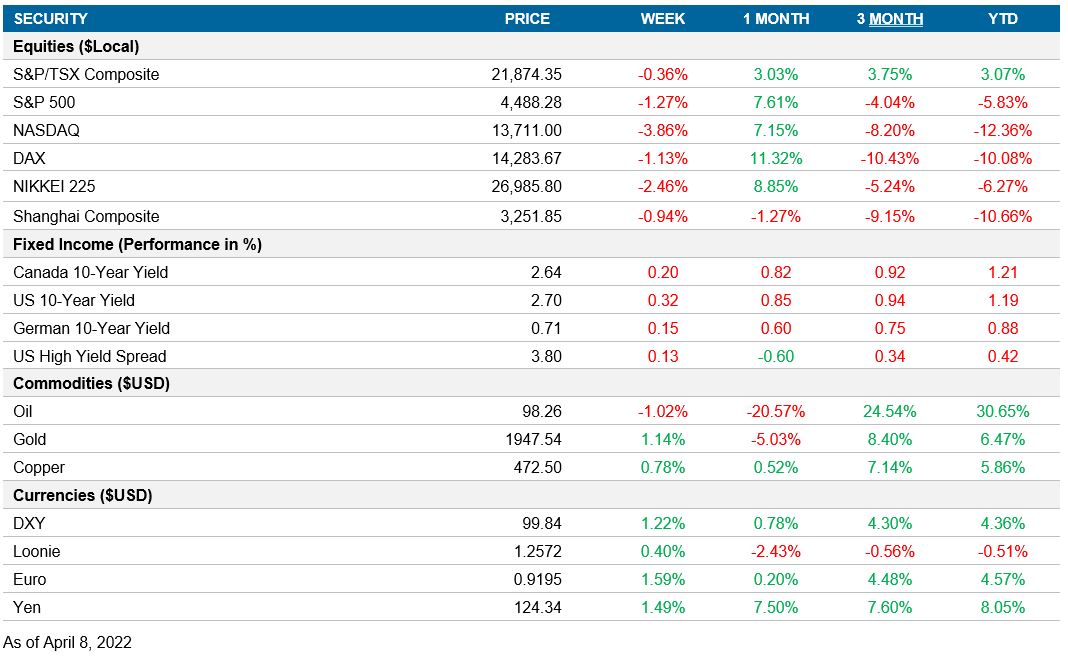 The Bank of Canada Q1 2022 Business Outlook Survey showed that businesses expected continued strong sales growth, despite labour shortages and supply chain challenges. Capacity pressures intensified mainly resulting from labour and supply chain frictions, indicating that higher prices could flow into the economy. Firms also indicated high intent to invest in machinery and equipment to help ease these constraints. 70% of firms indicated inflation to be over 3%, with an additional 26% saying they expect inflation between 2-3%. The survey was conducted prior to the Russian invasion of Ukraine, but the recent iteration included a special survey conducted in early March on the impact of the conflict. Firms generally expect higher prices for energy and other commodities, as well as rising transportation costs, longer delivery times, and reduced availability of commodities. The overall impact expected on sales was marginally negative.

Canadian employment rose by 73K jobs in March. Jobs climbed 31K in goods-producing sectors, and 42K in services sectors. The unemployment rate fell by 0.2 of a point to 5.3%, the lowest rate on record since data became available starting in 1976. Growth in average wages also accelerated to 3.4% year-over-year in the month, from 3.1% in February.

The Federal Open Market Committee minutes showed policymakers outlining a plan to reduce the central bank’s balance sheet. The FOMC said it would look to phase in the run-off over 3 months, up to a cap amount that was generally agreed at US$95B per month split between $60B of Treasuries and $35B of mortgage-backed securities. Fed members noted that most of this run-off would be through adjusting reinvestment amounts from maturing securities instead of sales. No final decision was made, but the Fed plans for a start as early as the upcoming meeting in May.

The Fed noted that projections for real activity were skewed to the downside and for inflation, they were skewed to the upside. The Russian invasion and ongoing COVID-19 outbreaks were perceived as risks that could exacerbate these concerns. Nonetheless, labour conditions were strong, indicated through unemployment falling to a post-pandemic low and spreading wage pressures. Many participants noted they would have preferred a 50 basis-point increase, as opposed to the 25 basis-point increase last meeting, but had reconsidered due to the Russia-Ukraine conflict. More rate hikes look to be on the horizon as one or more 50 basis-point increases “could be appropriate” if inflation pressures remain elevated, with the goal of moving monetary policy “towards a neutral posture expeditiously.”

Factory new orders were down 0.5% in February. The decline stemmed from durable goods, with transportation equipment orders falling 5.3% and machinery declining 2.9%.

The European Central Bank minutes revealed that although Russia’s invasion of Ukraine would have “material impact” on economic activity and inflation through high commodity prices, disruption of trade, and weaker confidence, the central bank viewed the underlying economic conditions as solid. The labour market had continued to improve, headwinds were waning, and compensatory fiscal measures could help offset the energy shock on consumers. Even with the downward revision to growth, the euro economy is still expected to post robust growth for the year. Inflation was also rising, but ECB analysis showed that around 3% of core inflation had been driven by the indirect effects of energy. The ECB assumes that the energy price shock is a level effect and would not last, and the same assumption was made toward supply bottlenecks, which were not considered as permanent sources of inflation. There were nonetheless some doubts about the convergence of inflation to 1.9%. In terms of potential rate hikes, members called for providing a firm end date of asset purchases during the summer which would open the path for a potential first hike in Q3.

The Bank of Canada will meet this week, with market expectations of a second rate hike. Investors are expecting an increase of 50 basis points, as inflation has continued to climb and the Canadian unemployment rate hit a record low last week.

Manufacturing sales for the month of February will be released. Sales for February are expected to have rebounded a strong 3.5% as many provinces eased their COVID-19 restrictions.

The CPI reading for March will be closely watched by markets as prices could have risen 1.2% in the month, with inflation accelerating to 8.4% year-over-year. Inflation will likely continue to be goods-driven with energy once again adding strongly to the reading, but we will watch for inflation broadening out into services. The reading could also solidify market expectations of a 50 basis-point hike from the Fed, as it is the final CPI reading before the next Fed meeting in early May.

Retail sales are expected to have risen 0.6% for March. However, a large portion of the increase could have been driven solely due to rising gasoline prices. The reading could be more moderate excluding gasoline.

The preliminary April reading of the University of Michigan Consumer Sentiment index will be available. Consumer sentiment is expected to post a further decline on surging gasoline prices and the war in Ukraine.

Industrial production for March is expected to show advances in manufacturing. There are however new risks in terms of supply chains, which have already been constraining production.

Chinese CPI is likely to have accelerated in March to 1.2%, from 0.9%, as the drag from declining food prices is showing signs of easing.

Chinese export data will be released, which threatens to have slowed significantly as the economy risks being hindered due to renewed pandemic lockdowns.

Germany’s ZEW survey, a gauge of sentiment and economic expectations, had seen a record drop due to the Russia-Ukraine conflict, and is expected to have declined further in April.

Markets will watch the European Central Bank for further details on the wind-down of their asset purchase program. The recent minutes indicated that rate hikes could shortly follow the conclusion of asset purchases.