Fixed income:
Bond-yield volatility increased after U.S. inflation data were released, and the curve has started to invert. Yields are down on long-term bonds due to a significant spike in demand for safe-haven investments amid recessionary concerns.

Commodities:
The oil selloff continued for a third week, causing the price of oil to fall below US$100. Prospects for global growth remain dim alongside falling copper prices. 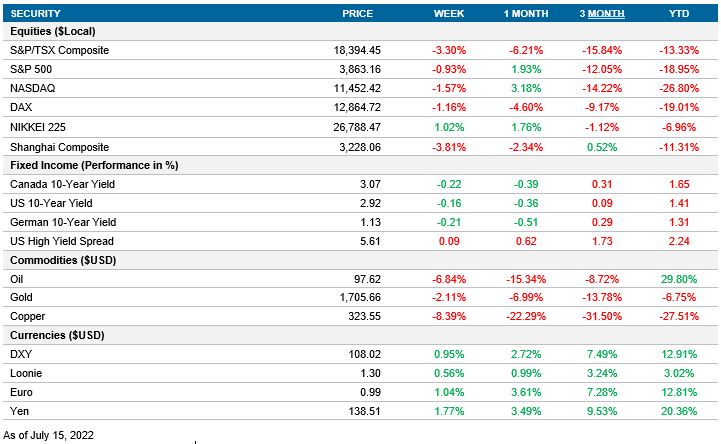 The BoC marched ahead with tighter monetary policy, raising its policy rate by 100 bps. This move was 25 bps higher than the expected 75-bp hike. The BoC cited the ongoing Ukraine-Russia conflict as the primary cause of inflation, but also mentioned that excess domestic demand is providing considerable upward momentum for inflation as well. The latter factor is the reason many economists raised their expectations for the current rate announcement after a previous employment data release. The BoC provided guidance that rate hikes will continue, with the pace of the hikes being determined by its economic assessment. The guidance used softer language, most notable being the removal of the word “forcefully.” Canadian markets reacted negatively, with the announcement triggering a selloff in equities. In July’s Monetary Policy Report, the BoC lowered its end-of-year GDP forecast to 3.5%—down from 4.2%—and raised the end-of-year CPI forecast to 7.2%—up from 5.3%. Consumption is expected to remain strong and the BoC only lowered the consumption forecast by 0.1 percentage points to 2.8%.

June’s Producer Price Index readings came in above consensus estimates. PPI figures were 11.3% year over year and 1.1% month over month—both readings came in higher than May’s figures. May’s figures were revised upwards to 10.9% year over year and 0.9% month over month. Energy continues to be the main driver of increasing PPI. The prices of final-demand energy rose by 10.0% month over month, with all other increases in final-demand goods or services coming in at under a percentage point. Rising CPI and PPI data increase the chances the Fed will raise rates by 75 bps at the end of the month, with consensus estimates swinging in favour of this prediction.

The Federal Reserve Bank of New York released its Empire State Manufacturing Survey results for July. The headline figure outlining current conditions contained a large surprise on the upside with an optimistic reading of 11.1, up from –1.2 the previous month. Consensus expectations were for July’s reading to be –2.0. The increase in the current situations index was driven by an increase in new orders and shipments and a decrease in input prices. This was offset by a decrease in output prices (the decrease was less than the decrease in input prices) and a decrease in unfilled orders. Whilst delivery times continue climbing, the rate of the increase is continuing to decline. The future expectations index continued declining and reached –6.2, highlighting a pessimistic outlook.

Industrial production during the month of June was weak and came in below expectations, contracting by 0.2% month over month and growing by 4.2% year over year. The decrease in monthly industrial production was driven by a 0.5% month-over-month decrease in manufacturing and a 1.4% month-over-month decrease in utilities. This was offset by a strong mining industry, which grew by 1.7% month over month. The mining industry was also a large contributor to the yearly figure, growing by 8.2% year over year.

The University of Michigan released its preliminary sentiment indicators for July. Consumer sentiment remained virtually unmoved but had a surprise on the upside with a reading of 51.1. June’s reading was 50.0. This was driven by a stronger durable goods sector but offset by worsening personal finances. The consumer expectations index also remained nearly unchanged, dropping to 47.3 from 47.5. An increasing proportion of consumers are blaming inflation for driving up the cost of living, but long-run inflation expectations fell to 2.8%.

China’s PPI for June was slightly above consensus estimates of 6.0%, with a reading of 6.1% year over year. This is 0.3% lower than the previous figure of 6.4% year over year from May and a 15-month low. The recent selloff in precious metals amid recessionary fears led to cost savings for Chinese producers.

China’s June CPI readings reported a surprise on the upside with a 2.5% year-over-year increase, up from 2.1% the previous month. The June reading is a 23-month high. Food prices rose by 2.9% year over year with higher demand stemming from a reopening economy. However, the price of pork continued to act as a drag, falling by 6.0% year over year.

Japan’s PPI figures for June surprised on the upside. The preliminary figure was 9.2% year over year, down from a revised figure of 9.3% from May but 0.3% higher than the forecasted figure of 8.9%. Increases in the prices of coal products (22.2% year over year) and utilities (28.2%) continue to provide upward pressure on input costs. The price of iron remained high at a 26.7% year-over-year increase. The country’s PPI increased 0.7% month over month, with the same factors driving the increase.

U.K. manufacturing production data for May followed the same trend—coming in with a surprise on the upside. Month-over-month production increased by 1.4%, breaking a three-month negative trend. Year-over-year production saw an incremental gain of 2.3%. All manufacturing subsectors aside from metals contributed positively to the headline figure. Basic metals and metal products saw a decrease of 0.7% month over month.

China’s industrial production saw a sharp increase during June but was below consensus estimates of 4.3% year over year. Industrial production reported growth of 3.9% year over year, up from 0.7% from May. The primary driver of this increase was the Chinese economy reopening on June 1, but minor lockdowns throughout the country likely prevented the figure from reaching the forecasted value.

China’s retail sales told a similar narrative during June. Retail sales managed to beat consensus estimates of 0.4% year over year, with a reading of 3.1%. May’s reading was contractionary, at -6.7%. This increase was primarily driven by China’s improving lockdown situation.

The Canada Mortgage and Housing Corporation will release housing starts data for June. Housing starts managed to beat expectations with consistent increases in the past two releases.

StatCan will be issuing its CPI release for June. Consensus estimates are for inflation to slightly decrease from 6.1% to 5.9% year over year, with the narrative that inflation has peaked. The BoC will be closely watching the next few inflation data releases to determine if there is more room for quantitative tightening.

StatCan will publicize May’s retail sales data. Retail sales growth is expected to continue increasing, with economists forecasting growth of 0.8% month over month. Gasoline sales were a large driver of sales growth throughout 2022, which was offset by a steady decline in automobile sales due to tightening supply chains.

The Census Bureau will release June’s housing starts data. The American housing market exhibited weak performance in May, with starts decreasing to 1.5M units from 1.8M. Consensus is expecting housing starts to slightly increase to 1.6M.

S&P Global will release the IHS Markit Flash U.S. Purchasing Managers’ Index for July. Rising inflation and interest rates will act as drags on the manufacturing PMI but strong sentiment from the Empire survey shows that there may be room for an increase. Economists are predicting a decrease in the manufacturing PMI to 52.0 and a decrease in the services PMI to 52.6.

The Office for National Statistics will release the U.K.’s inflation data for June. Economists believe inflation is near its peak and will rise to 9.2% year over year. With Boris Johnson’s recent resignation as Prime Minister, the U.K. may find added difficulty bringing this figure downwards until a new PM is elected.

Destatis will release Germany’s producer price index figures for June. Under Germany’s strong PMI readings, consensus expectations are for PPI to slightly decrease from its previous readings of 1.6% month over month and 33.6% year over year.

The Statistics Bureau of Japan will issue its CPI release for June. CPI figures for the last two releases were stable at 2.5% year over year.

The European Central Bank will make its rate announcement on July 21. The ECB has consistently signaled that it will raise rates during the July announcement, due to upward pressures on inflation stemming from energy and food. Whilst the central bank’s guidance initially suggested that there would be a 25-bp hike, recent signals from ECB meeting minutes imply that a higher hike may be possible.

S&P Global will release July’s IHS Markit Flash Germany PMI. On the same day, the IHS Markit Flash Eurozone PMI will be released. The European PMI releases are predicted to follow the same trajectory from last month and slightly fall from their June figures. PMIs are expected to remain expansionary