Equities:  The U.S market finished this week in very positive territory following a down week as a better-than-expected inflation print pushed the market up over 5% with the Nasdaq up ~7% on Thursday. The CPI print isn’t expected to change the Fed’s hawkish tone; however, the market does believe peak rates could be lower and could reach the peak sooner than previously anticipated.

Fixed income: This week finished strong as October’s CPI data released on Thursday drove yields down. The U.S 10yr fell well below the 4.17% we saw last week to 3.81%, and peak rates fell below the previous expectations of over 5% to ~4.9%. The cooler inflation could open the door to a Fed downshift, but Fed officials reiterated that the U.S has a long way to go as inflation is still far above the Fed’s 2% target.

Commodities: Although Crude Oil rallied on Thursday as inflation data came in below expectations, it was still down this week, dropping from 92.60 to 89.03 as the U.S data wasn’t enough to offset the weight of China’s zero-Covid policy and its impact on global demand. 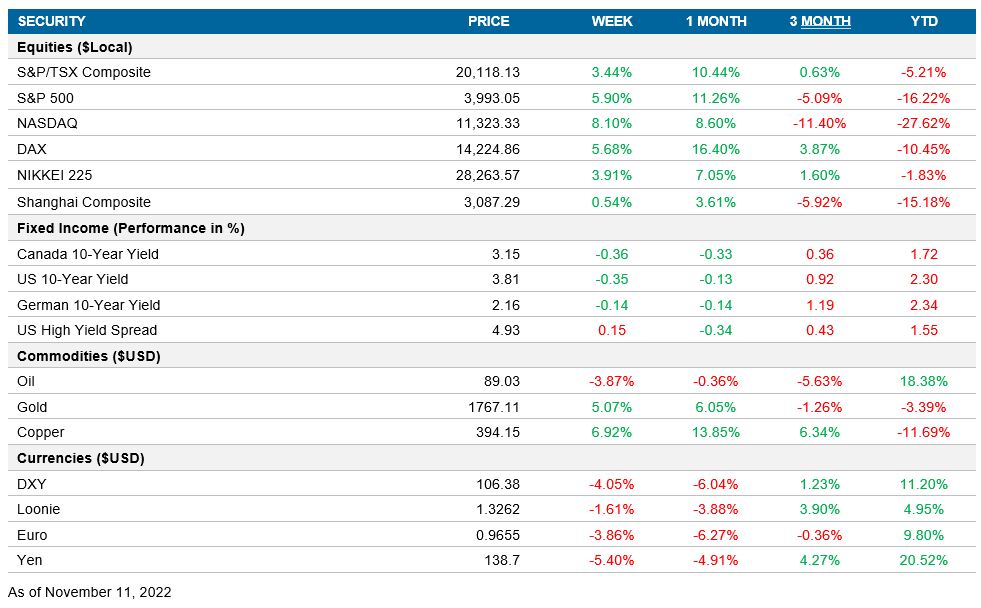 The annual inflation rate in the U.S slowed for a fourth month to 7.7% in October. This is the lowest level since January and below the 7.9% market forecast. The prices for gasoline, electricity, food and used cars all increased less than the previous month, while prices for shelter grew 6.9% vs the 6.6% a month ago. The numbers still point to strong inflationary pressures and broad price increases across the economy, mainly in the service sector, while goods have benefited from supply chain improvements. The October CPI data won’t necessarily change the Fed’s hawkish tone, but we can potentially see the peak rate coming in lower and earlier than what’s currently expected.

As expected, Euro Area retail sales increased by 0.4% MoM in October. The increase on the month was driven by non-food sales and a predominantly big increase in online sales. The outlook however remains bleak as retailers have become pessimistic and consumer confidence has collapsed, pointing to declines in household consumption.

China’s CPI fell to 2.1% in October compared to the 29-month high of 2.8% in September and below market consensus of 2.4%. October marked the lowest level since May, due to a slowdown in both food and non-food. China has set a target of ~3% for 2022 (the same as 2021). Core CPI rose 0.6% in October, the same rate as the month before. Food prices are likely to peak soon, plus energy inflation is set to fall as they are lapping the elevated base that was set from the Russia-Ukraine conflict. The service sector should remain subdued due to the zero-Covid policy, which should remain unchanged through 2023.

The British economy shrank 0.2% in Q3, the first contraction in 18 months, but less than the market expectations of a 0.5% drop. Figures could point to the beginning of the U.K’s longest recession with the Bank of England expecting the economy to contract 0.75% in the second half of 2022 and continue to fall in 2023 as high inflation and interest rates weigh on consumers and businesses.

Statistics Canada will release October’s CPI data on Wednesday. This release will be a fundamental input for the next BoC meeting on December 12. The previous reading of 0.1% was higher than expected but continued the downward trend observed since the peak in June 2022. In addition, September’s Core CPI print surprised the upside by 0.4% compared to market estimates and increased by 0.3% MoM.

The U.S. Census Bureau will release October’s Retail Sales Advance data. This leading indicator will provide the market with some guidance on how contractive monetary policy is affecting economic growth. The expected consensus is that MoM Retail Sales will accelerate by 0.9% after a month of virtually no change.

The Cabinet Office will release Japan’s preliminary GDP estimates for the third quarter. Japan’s growth is expected to be in line with the global slowdown, with a market consensus forecast of 0.3% quarter-over-quarter seasonally adjusted growth (compared to 0.9% in the previous quarter).

After disappointing Import-Export growth, the Chinese economy will have a new growth indicator that will provide additional colour on its pace of expansion. The National Bureau of Statistics of China will release October retail sales in the middle of an economic slowdown given the COVID lockdowns. The market consensus is that retail sales will decelerate, changing 0.7% year-over-year versus the 2.5% growth observed in September.

The U.K. Office for National Statistics will publish October’s CPI on November 16. The previous YoY inflation rate for the U.K. accelerated from 9.9% in August to 10.1% in September, which was in-line with 40-year high we saw back in July of 2022. The market consensus is that U.K.’s inflation will continue accelerating with a 10.5% expected YoY change.