Equities: The U.S. market broke with its positive trend after an FOMC message that was more hawkish than expected. In addition, the latest labour data confirmed that the U.S. job market continues to be strong. Consequently, the market expects the Fed to continue with the tight monetary policy.

Fixed income: After the recent rally, this week’s movement erased the gains from last week. The U.S. curve moved upwards, reacting to Powell’s message that suggested that the Fed would increase the peak rate projections in December’s FOMC meeting.

Commodities: Crude Oil saw a positive week following rumours that China will start to ease its Covid restrictions. Brent’s futures finished on Friday with its third weekly gain, closing at 98.5, the highest level since August. 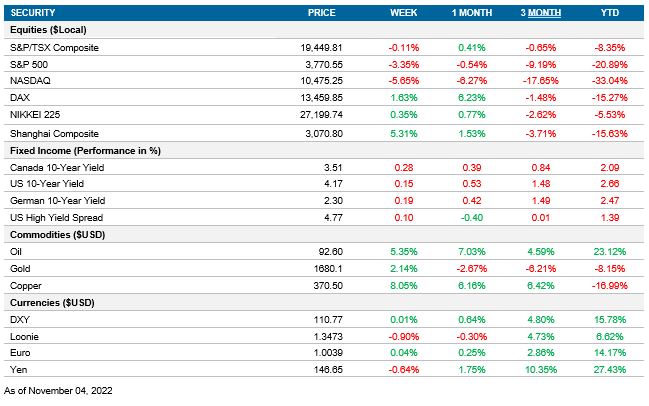 Canada manufacturing PMI fell to 48.8 in October from 49.8 last month, which marks the third consecutive month of contracting manufacturing activity. The performance was driven by sharp contractions in output and new orders, while companies struggle to find qualified workers. Manufacturers are somewhat optimistic about output levels in the year ahead, but the degree of positivity was the weakest since May 2020.

The Canadian unemployment rate was 5.2% in October, unchanged from last month and 10bps lower than estimates, pointing to a stable labour market. Employment rose by 108,300, the sharpest increase since February and over 10x the estimated 10,000 additional jobs. Construction, manufacturing, and foodservices were some of strong points, while retail and wholesale employment dropped 20,000, likely reflecting the shift from services to goods consumption.

As expected, the Fed raise the target rate by 75bps in the meeting this week, which marks the sixth consecutive hike and drove borrowing costs to new highs, not seen since 2008. During the press conference, Powell avoided endorsing a shift down to a 50bps hike in December and had a hawkish tone as he suggested that a pause would be premature at this point and peak rates will be higher than previously expected.

The U.S. unemployment rate increased to 3.7% in October, 10bps above expectations and above the 2.5-year lows of 3.5% seen last month. The jobless rate has been in tight range of 3.5% to 3.7% since March, pointing to a tight labour market, which is likely to contribute to inflationary pressures. The job gains were broad-based across industries, which is a positive indicator for the economy. More importantly for the Fed, the wage growth rate is down y/y to 4.7% and the 3-month annualized gain is 3.9%, suggesting that wage growth has peaked.

Euro-Zone unemployment rate fell to 6.6% in September, showing the labour market remains tight even as recession fears loom. The expectation is for unemployment to rise over the coming months, but not enough to stop wage growth from rising.

China’s PMI rose to 49.2 in October, a 1.1 rise from the 4-month low of 48.1 seen in September and a tick above the 49.0 estimate. Output and new orders fell at a slower pace as buying levels grew for the first time since the summer. Inflation on input prices rose due to high raw material prices and selling prices fell for the sixth consecutive month as firms promote sales. The view is that there is pressure on the economy, and we do not yet have a solid foundation for a recovery.

The Bank of England raised interest rates by 75bps to 3% during the meeting this week, which is the largest rate hike since 1989 and increased borrowing costs to the highest level since 2008. Policy makers were concerned about the high levels of inflation and said further rate increases may be required for a sustainable return the target inflation range. GDP is expected to continue to fall throughout 2023 and the first half of 2024, as high energy prices and tighter financial conditions put pressure on spending.

The Bureau of Labor Statistics (BLS) will release October’s CPI data. The market expects headline inflation to decelerate and core inflation to remain constant. Market consensus predicts a headline reading of 8.0% year over year (from 8.2% in September’s reading) and a core reading of 6.6%. It is crucial for inflation to start decelerating, given that the longer inflation remains at a high level, there will be continued expectations of future monetary tightening.

On Tuesday, Eurostat will release September’s retail sales report. In the previous month, Eurozone retail sales data for August contracted by 0.3%, in line with expectations. However, the biggest surprise of the release was the revision of July’s data, which decreased from a MoM expansion of 0.3% to a contraction of -0.4%. Overall, the YoY Retail Sales contracted by 2.0%, confirming that the European economy is decelerating.

The National Bureau of Statistics (NBS) will release China’s CPI data for October. In September, the YoY inflation rate for China accelerated to 2.8% from the previous value of 2.5% in August. This change represented the highest CPI reading in the last 29 months. On the other hand, core inflation is at its lowest value in 18 months, with an inflation rate of 0.6% YoY.

The UK Office for National Statistics will release the preliminary figures for GDP growth. The market consensus is that the economy will contract in the third quarter, given the tight financial conditions and the decrease in real income. The forecast is a 0.5% shrink in the third quarter, which will continue declining towards the winter