Commodities: West Texas Intermediate Crude Oil futures dropped 6.6% this week after a negative demand outlook due to slowing global growth tightening in the monetary policy and lockdowns in China. 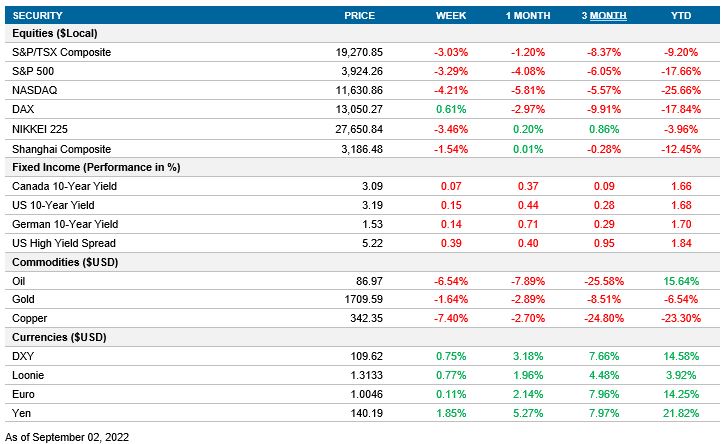 Canada’s 2Q GDP showed annualized growth of 3.3%. This reading exceeded the previous quarter’s growth of 3.1% but below consensus expectations of 4.4%. The biggest surprise was the net trade data; while imports increased by 31% annualized, exports only increased by 11%. However domestic demand recorded strong growth of 2.9% annualized.

The conference board released their August Consumer Confidence Index figures which increased to 103.2 from 95.3 in July. This new reading was above the market consensus of 98.0 and stopped the negative trend of the previous three months. The Present Situation Index presented a gain for the first time since March while the Expectations Index improved from its nine-year low recorded in July.

The U.S. Bureau of Labor Statistics August unemployment rate increased by 0.2% to 3.7%. This growth in unemployment can be explained by the rebound in the labor force participation rate which increased to 62.4% from 62.1% in July. In addition, the change in nonfarm payrolls decreased from 528k to 315k in August. On a positive note, this new reading is 240K higher than the pre-pandemic period and above the market expectations of 298k.

Japan’s Ministry of Internal Affairs and Communications released July jobless rate that (in line with market consensus) remained constant at 2.6%. This change was in addition to the record participation rate of 62.8% (above the pre-pandemic high of 62.4%). The job to applicant ratio increased to 1.29 from 1.27 on the previous month and beating consensus expectations of 1.27.

Japan’s industrial production monthly growth rate slowed sharply to 1.0% from 9.2% in June. However, this figure is above market expectations of -0.5% and the output is now almost at pre-pandemic levels. During July production, shipments and inventory ratio grew, while inventories remained constant.

China’s manufacturing PMI contracted to 49.5, decreasing from July’s reading of 50.4. The drop of PMI was larger than expected (50.0), suggesting that China’s industrial output is being affected by the recovery from the Omicron wave and is slowing along with the rest of the world.

Eurostat released August inflation for the Eurozone Aggregate which increased to 9.1% year-over-year from 8.9% in the July. The core inflation also accelerated from 4.0% to a record high of 4.3% in August. This indicates that ECB will have to continue to tighten to bring inflation down to 2%.

Eurozone’s unemployment rate decreased to 6.6% from 6.7% in the previous month. Of the major countries, the ones that presented the most considerable rise in unemployment were Germany and Spain, while Italy and France showed a decrease in the unemployment rate.

After a surprising hike of 100bps at July’s meeting, the Bank of Canada will meet to decide the target for the overnight rate. The overnight index swaps are implying a hike of 87 bps for the next meeting.

S&P Global will publish August’s Services PMI. The previous reading of 44.1 was the fastest fall in output since May 2020. July’s business confidence was at the lowest value in almost two years.

Eurostat will release Eurozone’s Retail Sale Volume for July. In June, retail trade decreased by 1.2% in the Eurozone, with non-food products as the main driver for this contraction as it decreased by -2.6%.

The European Governing Council will meet to decide the reference level of the three key ECB interest rates. At their previous meeting, the Council reiterated their strong commitment to their price stability mandate and decided to raise the interest rates by 50 basis points. The overnight index swaps imply that the hike will be 65.7 bps.

NBS will release China’s CPI and PPI data for August. In July, the year-over-year CPI came in at 2-year high with an increase of 2.7%, with pork prices increasing 20%. On the other hand, the PPI presented a growth of 4.2%.