Equities continued to drop during the week on mixed corporate earnings sentiment. Markets fared better earlier on strong performances from Meta and Microsoft, even as Alphabet came in under expectations. However, markets turned on Friday following disappointing results from Amazon and Apple. Amazon’s earnings disappointed, while Apple reported supply constraints related to China.

Yields remained relatively unchanged as we head into the U.S. Federal Reserve meeting in early May, where a 50-basis point hike is expected and the central bank’s official balance sheet reduction plan will be announced. The Bank of England will also meet, and is expected to hike rates for a fourth consecutive time.

Oil prices rose on news that the European Union was considering a ban on Russian oil imports being phased in over a few years. Copper prices declined as investors prepared themselves for lower growth and further restrictions in China as Beijing reported COVID cases. Gold declined on a higher U.S. dollar. 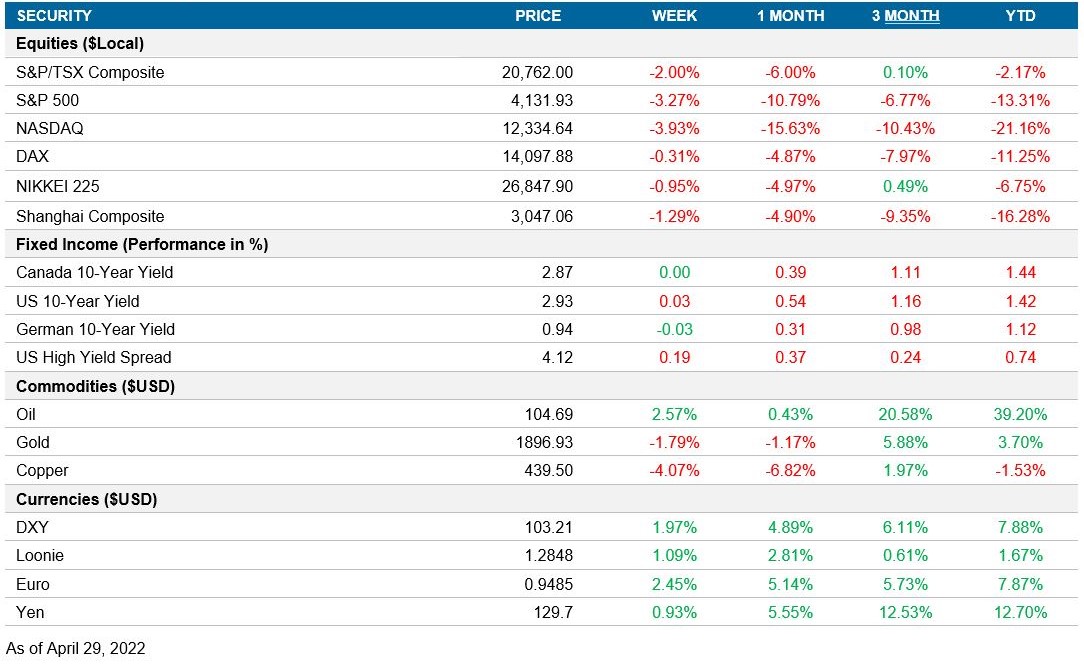 Canadian real GDP rose 1.1% in February on widespread increases as 16 of 20 sectors expanded. Service-producing industries rose 0.9%, while goods-producing industries rose 1.5%. Accommodation and food services expanded 15.1% during that month, and transportation and warehousing grew 3.1%. StatsCan estimates that GDP rose a further 0.5% in March, as reopening and easings of restrictions continued. If accurate, this would mean output expanded 1.4% in the first quarter of 2022.

Canadian small business sentiment was relatively unchanged. The CFIB Business Barometer Index fell to 64.9 in April from 65.1 in March on persistent inflationary pressure and labour shortages reported from firms.

U.S. real GDP posted a surprising decline of 1.4% quarter over quarter annualized in Q1 2022. However, the underlying data were more encouraging. Personal consumption remained resilient, rising 2.7%, and investment rose 2.3%. Government spending continued to decline 2.7% as stimulus efforts rolled off. The most significant detractor was net exports, however, which detracted 3.2% from the headline number. Imports surged 17.7%, outpacing exports, which declined 5.9%,

Personal incomes continued to rise 0.5% in March, on a mix of compensation, proprietors’ income, and government social benefits. Spending also posted solid increases, increasing 1.1% in March. Services saw widespread increases in all sectors, led by the other services category, which includes international travel and food services and accommodation. Within goods, spending for nondurables increased as spending declined in motor vehicles.

The Conference Board Consumer Confidence Index declined to 107.3, down slightly from 107.6 in March. Purchasing intentions remain depressed, but 12-month inflation expectations declined from an all-time high of 7.9% to 7.5%.

The Bank of Japan left rates unchanged, but surprised markets with an adjustment to its asset purchase program. The central bank said it would buy an unlimited amount of Japanese government bonds to protect the current 0.25% ceiling on 10-year bonds. The response comes in response to rising yields globally given elevated inflation, while Japan continues to buck the trend facing subdued inflation.

French President Emmanuel Macron was reelected for a second term, beating his opposing candidate Marine Le Pen in a 59% to 41% result. The victory was generally viewed favourably by markets.

The German ifo Business Climate Index rebounded to 91.8 in April, following the 8-point drop to 90.8 in March. Business sentiment stabilized, marginally better but remaining historically low following the Russian invasion. The construction sector exhibited an increase in pessimism, burdened by material supply bottlenecks. The services sector saw an improvement, while manufacturing and trade were little changed.

The April iteration of the S&P Global Canada Manufacturing PMI will be released. The reading is expected to continue to show a robust expansion as restrictions continued to be eased in March.

Canadian employment for the month of April should continue to gain. Market consensus is for another 40K in jobs, which could see the unemployment rate decline further to another record low of 5.2%.

The U.S. Federal Reserve will meet in early May and is expected to raise rates for a second consecutive time. Markets are pricing in a 50-basis point hike, double the previous hike. Forward guidance from the Fed will be of particular interest to markets, from a formal announcement of the balance sheet rolloff to future hikes. Investors are on the watch for the potential of further 50-bp hikes to come at future meetings.

Nonfarm payrolls are expected to have risen by another 400K jobs in April. The reading could see the unemployment rate decline to 3.5%, which would be on par with the pre-pandemic level in February 2020. Continued strong job readings would likely give the Fed further reassurance for an accelerated hiking cycle.

International – China’s PMI (May 4); Bank of England meeting (May 5); German industrial production (May 6)

Chinese PMI will indicate how the economy is faring as the nation faces lockdowns from a renewed COVID wave; these results could point to a deeper slowdown.

The Bank of England meeting should see the fourth back-to-back rate hike, rising rates 25 basis points to 1.00%. Markets will also be on the watch for an announcement on selling bonds; the central bank had said that rates rising to 1.00% was a prerequisite for such actions.

Lastly, we have Germany’s March industrial production, which is expected to have declined. Factory output could have been hit by supply chain disruptions from the Russia-Ukraine war.