Commodities
The commodities market continued its slump from the previous week. Higher prices and slowing demand have begun to take their toll on oil prices. Gold remained weak. 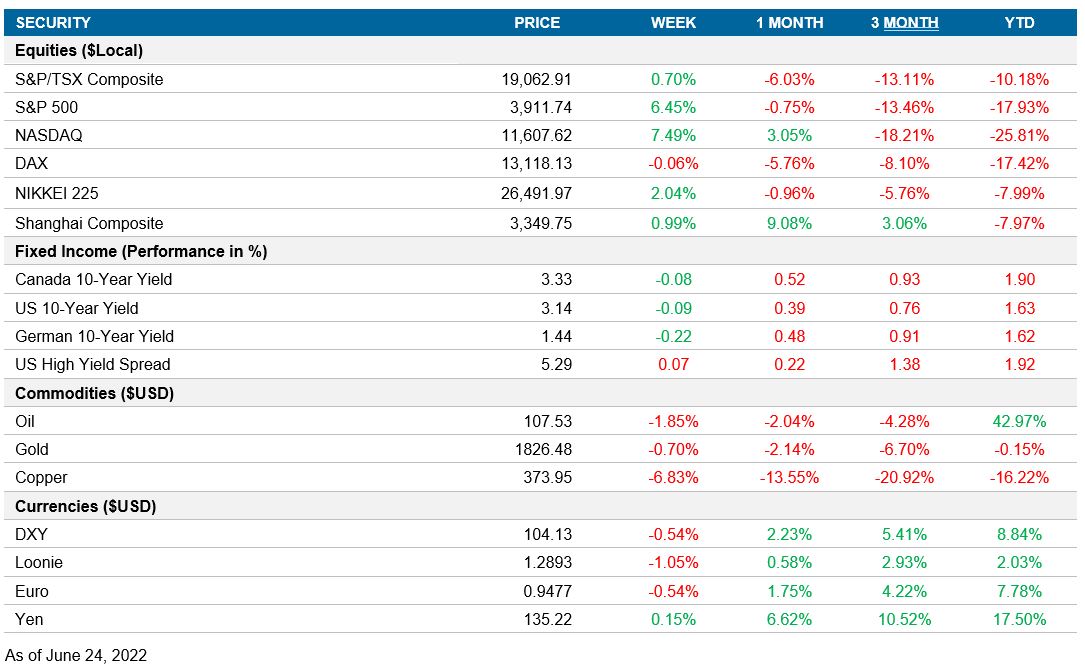 StatCan published Canada’s retail sales data for April. Consensus estimates were for growth of 0.8% month-over-month, but the actual figure beat estimates slightly with growth of 0.9%, up from a growth of 0.2% the previous month. The automobile industry continued to contract with a decline of 0.3%, and sales within food stores declined 0.5%. These were offset by increases of 3.0% in gasoline sales, 4.2% in general merchandise sales and 11.3% in miscellaneous product sales. Core retail sales grew 1.0% month-over-month.

StatCan’s CPI release for May highlighted an increase in inflation. Inflation rose 7.7% year-over-year—higher than consensus estimates of 7.3%. This figure is the highest inflation reading since 1983. The largest driver continues to be energy, with gasoline rising 48.0% year-over-year. Increases in food (8.8%) and shelter (7.4%) costs also added substantial amounts of upward pressure. Month-over-month, inflation rose 1.4%. Seasonally adjusted core inflation came in at 5.4% year-over-year.

S&P Global released the IHS Markit Flash U.S. Purchasing Managers’ Index survey data for June. U.S. PMIs have all declined with a surprise on the downside. The Composite Index fell to a 5-month low of 51.2, the Manufacturing Index fell to a 23-month low of 52.4, and the Services Index fell to a 5-month low of 51.6. While these readings remain optimistic, they are in line with the results we saw from the Empire State Manufacturing Survey last week. Work backlogs have declined for the first time in 2 years, leading to employment slowdowns across both manufacturing and services industries. New orders have also declined for the first time in almost 2 years. These factors, along with rising inflation, caused a decrease in manufacturing output, which caused the Manufacturing Output Index to fall to contractionary levels with a reading of 49.6--a 2-year low.

S&P Global published the au Jibun Bank Flash Japan PMI data for June. The private sector saw its largest reading since last December, with a composite PMI figure of 53.2, up from 52.3 the previous month. This growth was driven by the services sector, which saw an expansionary reading of 54.2, up from 52.6 in May. Pandemic restrictions on international visitors eased further, which bolstered the services sector. The manufacturing PMI continued to remain expansionary with a reading of 52.7, down from a reading of 53.3 the month prior. The primary detractors were inflationary pressures and supply chain issues.

S&P Global’s IHS Markit Flash Eurozone PMI had its June release. Like the U.S. figures, PMI readings have all declined below consensus estimates. The Composite Index dropped to a 16-month low of 51.9, the Manufacturing Index fell to a 22-month low of 52.0, and the Services Index dropped to a 5-month low of 52.8. New orders have declined for the first time in slightly over a year and business expectations have turned grim. Inflationary pressures on input costs have slightly decreased but output prices have continued to rise, driving down demand. The decrease in demand, alongside supply chain issues stemming from the Ukraine-Russia conflict and China’s mixed lockdown signals, caused the Manufacturing Output Index to fall to a contractionary level with a reading of 49.3. This is a 2-year low.

S&P Global published its June release of the IHS Markit Flash Germany PMI. The readings shared the same pattern with the eurozone and U.S. PMI data. Germany’s PMI continued its downtrend—falling for the fourth month in a row and failing to meet consensus estimates. The Composite Index fell to a 6-month low of 51.3, the Manufacturing Index fell to a 23-month low of 52.0, and the Services Index fell to a 5-month low of 52.4. New orders have decreased for the first time in half a year. Demand for goods and services suffered downward pressure from inflationary headwinds. Inflation has also caused input costs in Germany to continue to rise, but these costs were offset by a slight relief in supply chains. The Manufacturing Output Index turned contractionary with a reading of 49.0, a 23-month low.

Germany’s ifo Business Climate Survey reported on its June data findings. The Business Climate Index declined below expectations from 93.0 to 92.3. Future expectations dragged the Business Climate Index down, with high inflation taking a toll on demand for goods and services. The Expectations Index dropped from 86.9 to 85.8 with a surprise on the downside. The Situation Index also had a slight drop from 99.5 to 99.3, beating expectations. The biggest drags were manufacturing and trade. The Manufacturing Index fell from 2.7 to 0.3, while the Trade Index fell from –10.7 to –14.8. These were offset by a strong services sector and an increase in construction sentiment. The Services Sector Index increased from 8.2 to 10.8 and the Construction Index increased from –13.4 to –9.7. The services sector may continue to grow as demand for recreational activities and food services may increase as we enter the summer months.

The Statistics Bureau of Japan released inflation data for May. Japan remains an outlier with inflation relative to other developed markets. Year-over-year CPI met consensus estimates and held stable at 2.5%. The main drivers of CPI continue to be growth in food (4.1%) and utilities (14.4%). Year-over-year core CPI (excluding food and energy) also met consensus estimates, holding steady at 2.1%. Japan has historically had issues with low inflation.

StatCan will be releasing April’s GDP data on June 30. Consensus estimates are expecting the economy to expand with growth of 0.3% month-over-month. Year-over-year growth is expected to be 4.9%. In March, all goods-producing sectors were up aside from utilities, which fell 1.4%. An increase in growth within service-producing sectors is anticipated.

The U.S. Census Bureau will release durable goods orders data for May. Economists are expecting growth to decline to 0.1% from 0.5% the previous month.

The Conference Board will release their consumer confidence survey results for June. Consensus is expecting the index to move to 100.0, down from 106.4 the month prior. This implies that consumer confidence is expected to reach a neutral level—numbers above 100 imply optimism and numbers below imply pessimism.

The Ministry of Economy, Trade and Industry will release May’s Japanese retail sales data on June 28. Year-over-year growth is projected to increase by 0.9% to 4.0%. April’s month-over-month growth had an upwards revision to 1.0% and consensus is expecting this figure to hold going into May.

The National Bureau of Statistics will release China’s PMI data for June. In May, Chinese PMI had a slight recovery, managing to slightly beat estimates. With COVID restrictions mostly lifted on June 1, this improvement in PMI is expected to continue.

Eurostat will release unemployment data for the month of May. Economists are expecting the unemployment rate to stabilize at the last reading of 6.8%.