Equities fell for the fifth straight week in the U.S. Markets continue to be affected by volatility as the U.S. Federal Reserve and Bank of England raised key interest rates once again. Inflation and higher interest rates continue to drag on markets. The Fed stated that more hikes are on the table for the next few meetings.

Yields climbed with the U.S. and Canada 10-year yield topping 3% this week. The Bank of England meanwhile forecasts that the U.K.’s consumer price index could top 10% year over year and growth could contract later in Q4.

Oil prices rose further as the European Union nears a deal to ban Russian oil imports as early as the end of the year. Some euro countries have pushed back given their high dependence on Russian energy imports, but could agree to a deal given extra time to comply. Copper slumped on demand concerns given fears of further lockdowns in China. 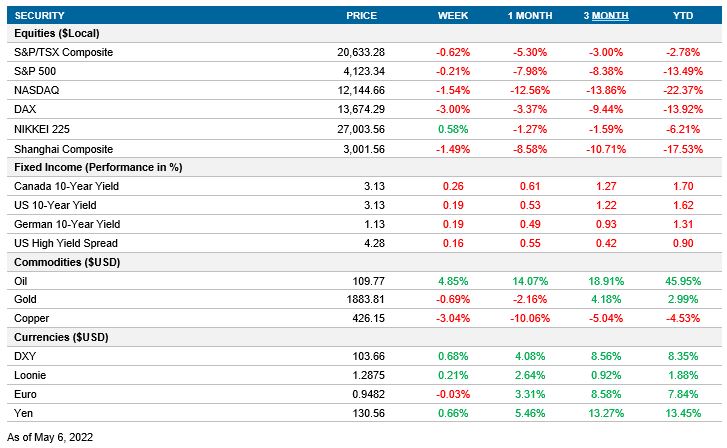 The Fed raised rates for the second consecutive time, this time doubling the rate hike to 50-basis points and raising the Federal Fund rate to 1.0%. The vote was unanimous, indicating no dissenters even with the talk of a potential 75-bp hike. During the press conference, Fed Chairman Jerome Powell said, “There is a broad sense on the committee that additional 50-basis-point increases should be on the table at the next couple of meetings” and that a 75-bp increase is not something being actively considered. Powell commented that the labour market was tight with 1.9 vacancies for every unemployed person (11.5 million vacancies to 6 million unemployed). The Fed is looking to moderate demand, which could see job vacancies come down and that could also see wages and inflation moderate without slowing the economy.

Details of the Fed balance sheet rolloff were also announced, starting in June with US$30B Treasury and US$17.5B of mortgage-backed securities per month coming off the central bank’s balance sheets, ramping up to US$60B and US$35B, respectively, after three months. Powell said that the Fed’s models show that the pace of the runoff equates to about one rate hike (or 25 bps) worth of tightening, stressing very wide uncertainty bands. The Fed said it would slow and eventually stop the decline in the size of the balance sheet when reserves are judged to be consistent with ample reserve levels.

The Caixin China General Composite PMI declined to 37.2 in April, from 43.9 in March. The Manufacturing PMI held up better at 46.0, down from 48.1, while the Services PMI dropped to 36.2, from 42.0. A tightening of restrictions on the renewed COVID wave saw declines in output and new business. Employment was shed as a result. Supply chain disruptions intensified as vendor performance dropped. Some companies reported cancelled orders due to difficulties producing and shipping products. Once again, prices rose on higher commodity and transportation costs. Prices offered by service providers, however, dropped as discounts were offered to attract business amid muted conditions.

The Bank of England hiked rates for the fourth consecutive time, raising rates by 0.25% to 1.00%. The vote was 6–3, with the dissenters preferring a 50-bp hike. The central bank also provided updated projections. Inflation is expected to increase, rising to over 9% in Q2 and is now expected to peak at slightly over 10% in Q4. U.K. GDP meanwhile is expected to slow sharply, with GDP projected to contract in Q4 2022 and growth to remain broadly flat in 2023. The BoE also confirmed it would begin the process of selling U.K. government bonds and would provide an update in August.

A quiet week for Canada with no notable data releases.

The CPI numbers for April are of particular interest for investors. The pace of inflation could have slowed, with market consensus of a 0.2% monthly increase. More importantly, this slowing pace could be a turning point for the year-over-year prints, which have repeatedly risen. According to market consensus, CPI could have slowed to 8.1% year over year from 8.5% in March.

The University of Michigan consumer sentiment index had seen a small rebound from lows as a result of the Russia-Ukraine war. There may be a further rebound as labour conditions are resilient.

Chinese exports for April likely saw a significantly slowing due to lockdowns in Shanghai and other parts of the country.

Chinese CPI meanwhile could have picked up to 1.9% in April, from 1.5% in March, on higher energy and food prices. However, other categories could drag as the COVID flareup limited potential for spending.

Germany’s ZEW survey, a gauge of sentiment and economic expectations, had seen a significant drop due to the Russia-Ukraine conflict and confidence could remain muted as the conflict drags on. European economic projections have also weakened since.

U.K. GDP for March is expected to be muted with markets anticipating 0.1% growth and output that expanded 1.0% in the first quarter.