Equities: Equities saw a strong rally after U.S. July inflation data was released mid-week, which was below estimated and showed inflation slowing. Investor sentiment was bolstered by the possibility that the Federal Reserve may be more dovish than previously anticipated.

Commodities: Oil rallied after the International Energy Agency raised its demand forecast. Copper rallied alongside the peaking inflation narrative and a more favourable assessment of the outlook for global growth. 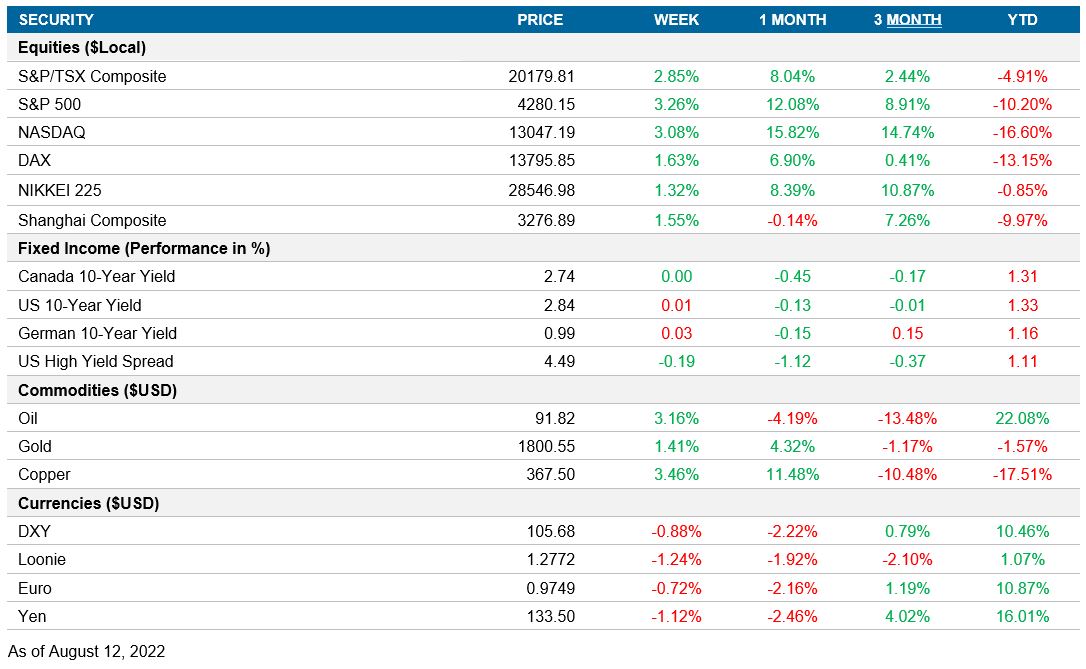 U.S. CPI was lower than expected and remained flat for the month of July. CPI readings were 8.5% year-over-year and 0.0% month-over-month. The price of gasoline has fallen by 7.7% but the decrease was offset by a 1.1% increase in the cost of food and a monthly increase of 0.5% in shelter costs. This CPI release was good news for the Fed and equity markets, because it signaled that inflation may have peaked in the short term.

The University of Michigan’s preliminary release of their August consumer sentiment survey released with a surprise on the upside. Consumer sentiment had a reading of 55.1–up from 51.5, and consumer expectations had a reading of 54.9–up from 47.3. Both sentiment and expectations had tailwinds from declining energy costs, leading consumers to lower their 2023 inflation expectations (median) to 5.0%. However, inflation is still the elephant in the room and 48% of consumers blame inflation for reducing their quality of life.

China’s July PPI release shared a similar narrative with their CPI. PPI came in weaker than expected with a value of 4.2%, down from 6.1% year-over-year in June’s release. Energy and metal prices have fallen during the month of July as a recessionary narrative was popularized in the U.S. This alleviated cost pressures many Chinese producers were facing.

The U.K.’s second quarter GDP estimates released with a surprise on the upside. GDP was estimated to have contracted by 0.1% quarter-over-quarter. The year-over-year figure showed an expansion of 2.9%. Government consumption fell for a second consecutive quarter by 2.9%. Household consumption has also fallen by 0.2% quarter-over-quarter, mainly due to high inflation tightening household budgets.

The Canadian Mortgage and Housing Corporation will release July’s housing starts data. Housing starts have surprisingly seen consistent outperformance for the last three months. Housing starts are forecasted to have a reading of 265K, down from 273K in June.

StatCan will publish Canada’s CPI data for July on August 16. Consensus estimates are expecting CPI to have a reading of 8.4%, up from June’s reading of 8.1% year-over-year.

StatCan will release retail sales data for June on August 19. Retail sales has consistently done well throughout 2022 because of higher prices, despite declining sales volumes. Sales expanded 2.2% month-over-month during May.

On August 15, The Federal Reserve Bank of New York will release their Empire manufacturing survey findings for August. The index is expected to decline to 5.0 from 11.1.

The Census Bureau will release U.S. housing starts data for July on August 16. Housing starts have been underperforming for the past three months due to developer concerns over quantitative tightening. Consensus estimates are expecting housing starts to come in at 1.54M.

The Federal Reserve will have its industrial production release for July on August 17. Production is forecasted to increase by 0.3%, up from a contraction of 0.2% month-over-month in June. Losses were broad-based in June, with only three market groups (home electronics, miscellaneous and clothing) posting gains.

The Census department will publish U.S. retail sales data for July. Consensus estimates are forecasting sales to grow by 0.2%, down from growth of 1.0% month-over-month in June.

The Cabinet Office will release Japan’s advance GDP estimates for the second quarter. Japan is expected to escape a technical recession with a forecasted expansion of 0.6% quarter-over-quarter.

The National Bureau of Statistics will release China’s industrial production data for July. Building on momentum from June’s reopening, production is expected to expand by 4.6% year-over-year.

The Office for National Statistics will release the U.K.’s CPI data for July. Consensus estimates are expecting CPI to have a reading of 9.8% year-over-year and 0.4% month-over-month.

Japan’s Statistics Bureau will publicize their CPI data for July. CPI is expected to slightly increase to 2.4%, up from 2.2% year-over-year in June.

The Office for National Statistics will have the U.K’s retail sales release for July. Retail sales have experienced contractions for the past two months due to sharp decreases in demand from rising inflation. This trend is expected to continue with forecasted contractions of 3.3% year-over-year and 0.2% month-over-month.

Destatis will release Germany’s PPI data for July. PPI is expected to increase to 0.5% month-over-month. German producers have experienced high inflation throughout 2022 and this is expected to continue after a suboptimal PMI report for July.