Equities: Investor sentiment weakened after the Federal Reserve signaled further rate hikes in their July minutes. Equities broke their four-week winning streak as markets turned negative in the latter half of the week.

Fixed income: U.S. yields rose as a result of a sell-off of less risky assets. The U.S. yield curve slightly flattened but the 10 and 2-year yields remain inverted.

Commodities: Oil prices fell alongside investor sentiment as fears of a recession increased. Copper prices also fell but this was offset by the People’s Bank of China quantitatively easing which increased copper demand in the region. Gold lost its momentum from last week as bonds rallied and investors believe inflation will fall further. 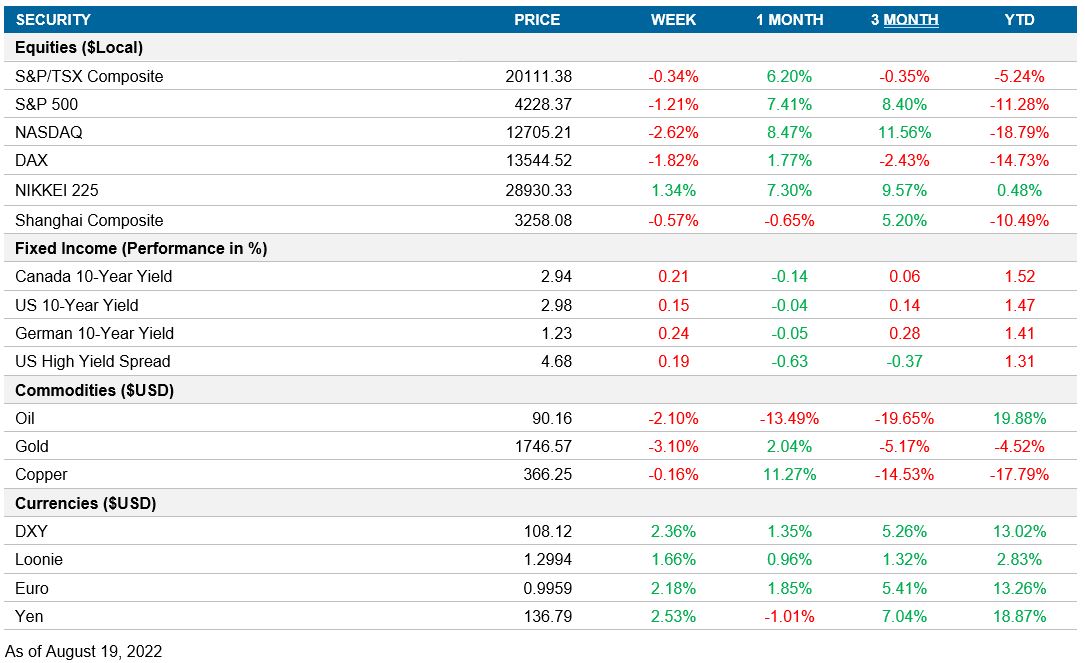 Canada’s Consumer Price Index released in-line with consensus estimates during July. CPI figures were 7.6% year-over-year and 0.1% month-over-month. The fall in inflation is attributed to a 9.2% month-over-month decrease in gasoline prices. However, the price of food continued to rise by 0.9% and shelter costs increased by 0.4% month-over-month. Wage growth is still lower than CPI, implying the Bank of Canada still has more room to tighten and may opt for a more hawkish 75-bp hike in September.

The Empire manufacturing index of general business conditions saw a harsh fall in August. Consensus estimates were for a reading of 5.0, but the actual reading was –31.3. New orders dropped by 35.8 points to –29.6 and unfilled orders dropped by 7.5 points to –12.7, representing a steady decline in demand. On the flipside, manufacturers have reported improved delivery times. Manufacturers are still hiring, but the pace is starting to slow, with the number of employees index falling by 10.6 points to 7.4. Business expectations for the next six months have improved with a reading of 2.1.

U.S. housing starts have continued to surprise on the downside for the fourth consecutive month in July. Housing starts had a reading of 1.45M, down from a revised figure of 1.60M in June. The decrease in housing starts was broad-based, with single unit starts declining by 10.1% and housing with five or more units declining by 10.0% month-over-month. Regionally, declines occurred throughout the United States aside from the Northeast region where starts increased to 230K up from 139K the previous month.

Japan’s CPI met expectations during the month of July. CPI had readings of 2.6% year-over-year and 0.5% month-over-month. Core CPI had a reading of 2.4% year-over-year. Japan continued to handle its inflation situation well, with prices rising due to a weakening yen and tighter food supplies. The Bank of Japan will likely remain dovish for the near future despite inflation remaining above their 2.0% target.

Germany’s Producer Price Index surprised on the upside with a sharp increase during the month of July. PPI readings were 37.2% year-over-year and 5.3% month-over-month. The primary driver of PPI continues to be energy, with prices increasing by 105.0% year-over-year and 14.7% month-over-month. The yearly PPI figure saw broad-based increases whereas the monthly figure had a slight offset in intermediate goods (-0.3% MoM) due to the declining price of metals.

The Census Bureau will release their preliminary durable goods orders data for July. Consensus estimates are an expansion of 0.4%, down from 2.0% month-over-month.

IHS Markit will release the au Jibun Bank Flash PMI for August. Japanese PMI figures have remained relatively stable between the 50.0-55.0 range for the past 3 months. This pattern is likely to continue because of the strong consumption reported in Japan’s second quarter GDP estimates and supply chains easing.

IHS Markit will release the eurozone’s Flash PMI for August. During July, the manufacturing PMI turned contractionary as high inflation acted as a headwind on output levels. Consensus estimates are 49.0 for manufacturing and 50.5 for services.