Equities: Investors focused on Powell’s speech from the Federal Reserve’s annual meeting in Jackson Hole on Friday. The Chairman mentioned that “Restoring price stability will likely require maintaining a restrictive policy stance for some time.” The market interpreted his remarks as hawkish resulting in a market selloff.

Fixed income: The U.S. yield curve shifted upward due to the expected slowdown of the economy. The increase in the long end of the curve occurred throughout the week was the market priced for a more hawkish Fed, while the shift in the short end of the curve mainly occurred after Powell’s speech.

Commodities: Oil prices increased this week after Saudi Arabia’s Energy Minister warned that OPEC+ might be forced to cut production if the futures market continues to be disconnected from fundamentals. 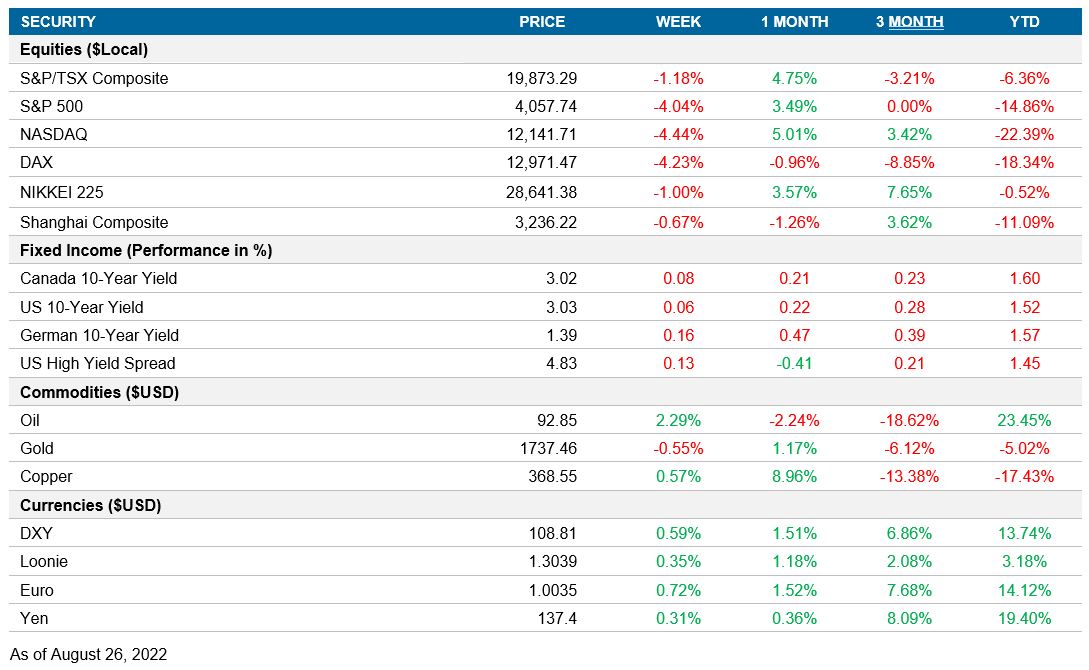 During his speech in Jackson Hole, Federal Reserve Chair Jerome Powell remarked that the focus of the Federal Open Market Committee is to bring inflation back to the 2% target. He mentioned that restoring price stability will take some time and require a sustained period of below-trend growth. In addition, this tightening will soften the labor market conditions, slow growth, and consequently “will also bring some pain to households and businesses.”

During the last week, the economic data presented mixed signals regarding the growth of the U.S. economy. New home sales decreased from 590k in June to 511k in July. Home sales are at their lowest level since January 2016 and the sixth monthly decline in 2022. The rise in property prices and the increase in borrowing costs were the main factors that detracted from sales.

Durable goods orders remained virtually unchanged  in July at $273.5 billion. Despite being the first month without an increase since February, the U.S. Census Bureau report included positive numbers regarding shipments. Shipments of manufactured durable goods increased 0.4% during July, consolidating the growth found in fourteen out of the last fifteen months.

The Jibun Bank Japan PMI Composite Output Index decreased to 48.9 from 50.2. The manufacturing PMI fell from 52.1 to 51.0, while the services PMI fell to 49.2 from 50.3. The recent PMI data indicated that  private sector business growth  was slowing in July. This soft growth was the slowest pace since March. On the manufacturing side, service providers presented a decrease in production for the first time in five months. On the service side, businesses recorded the slowest growth since April.

IHS Markit released the Flash Eurozone PMI Composite Output Index, which decreased to 49.2 from 49.9 during the month of July. The manufacturing PMI declined to 49.7 from 49.8, while the services PMI fell to 50.2 from 51.2. The contraction in the Services was driven by the increased cost of living, which weakened  demand. In the manufacturing sector, the index is at a 26-month low, led by the decrease in production.

July’s Flash U.K. PMI Composite Output Index dropped to 50.9 from 52.1. Service PMI also declined to 52.5 from 52.6 and the manufacturing PMI fell to 46.0 from 52.1. The index fell to a contractionary level on the manufacturing side, with the lowest value in 27 months. This decline in growth was mostly driven by a fall in production. PMI data shows a slowdown across the U.K. private sector.

After presenting a 3.1% annualized growth in the first quarter of the year, Canada will publish its growth for the third quarter of 2022.

The Ministry of Internal Affairs and Communications will release Japan’s unemployment rate for the month of July. The indicator presented a value of 2.6% during June.

One day later, the Ministry of Economy Trade and Industry will release July’s industrial production data, which had a prior reading of 9.2% month-over-month.

NBS will release China’s manufacturing PMI data for July. In June, the indicator changed from expansionary to contractionary territory, with a reading of 49.0. This reading continued the contractionary trend that has been present throughout 2022.

Eurostat will publish the Harmonized Indices of Consumer Prices (CPI) for August. This release will guide the future policy path for the ECB, who switched from a “forward guidance” to a “meeting by meeting” approach.

Eurostat will announce July’s unemployment rate, which has been stable at 6.6% for the last three months.