Fixed income: Yields moved higher following the release of the U.S. employment data due to an increased probability of hawkish actions from the Federal Reserve, and especially at its next meeting in September. The U.S. yield curve remains inverted across numerous segments, including the notable 2y10y segment. 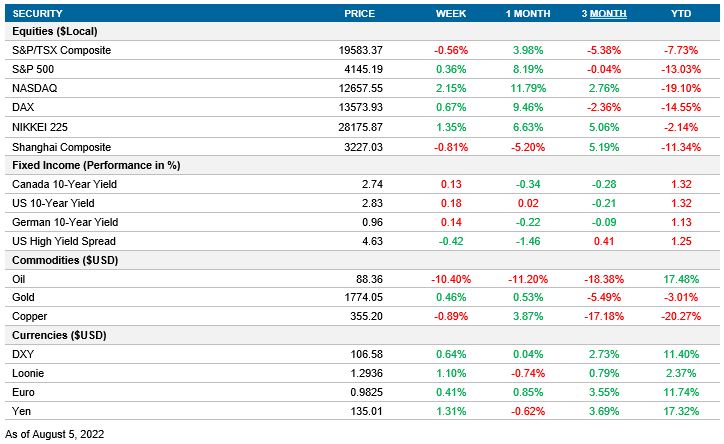 Canada’s employment data slightly weakened during the month of July but remained strong overall. The participation rate declined to 64.7%—the second consecutive fall. Due to the lower participation rate, the unemployment rate managed to remain stable at its historic low of 4.9%. Hourly wages continued to increase, growing by 5.2% year-over-year. Wage growth remains too high for the BoC’s inflation target.

U.S. employment data was strong for the month of July. The participation rate remained relatively unchanged with a slight decrease to 62.1%. Unemployment has decreased to 3.5% and wages continued to strengthen —increasing by 5.2% year-over-year. U.S. employment growth remains very strong and may cause the Fed to execute a 75-bp hike in September.

German retail sales data for June released with a surprise on the downside. Sales contracted by 1.6% month-over-month and 8.8% year-over-year. Consumption of non-essential goods has decreased greatly as German consumers experienced a harsh drop in purchasing power due to rising inflation.

Eurozone retail sales shared the same pattern as Germany during the month of June. Sales contracted by 1.2% month-over-month and 3.7% year-over-year. The sales of non-food products (excluding gas) fell by 2.6% month-over-month. Like Germany, the eurozone’s inflation has caused a slump in consumption with weakening consumer sentiment.

The Bank of England raised rates by 50-bp to 1.75% during their latest rate announcement on August 4. This was the largest rate hike the U.K. has seen since 1995. The BoE provided guidance that they will take the actions necessary to return inflation to 2% in the medium-term. They also raised their inflation projections to 13% year-over-year by the end of 2022. The Bank’s GDP projections are forecasting a U.K. recession later this year from Q4 2022-Q4 2023.

Germany’s industrial production data for June released with a surprise on the upside. Consensus estimates expected a contraction of 0.4% but the headline figure showed an expansion of 0.4% month-over-month. Consumer goods increased by 1.1% and vehicle production increased by 5.5% month-over-month. The increase in automobile production across many developed economies indicate that Chinese supply chain issues has eased greatly since China’s re-opening on June 1. Based off the recent PMI release, July’s industrial production will be facing headwinds in the form of inflation and decreased demand.

The Bureau of Labor Statistics will release their July CPI data. Economists are expecting CPI to fall to 8.9% year-over-year and 0.3% month-over-month. The narrative that inflation peaked in June is growing in popularity. However, energy and food prices should continue to provide upwards pressure to the statistic for the foreseeable future.

BLS will publish July’s PPI data. Under the narrative that inflation has peaked, consensus estimates are 0.3% fall from the 1.1% month-over-month increase earlier.

The University of Michigan will release their preliminary consumer sentiment survey findings for August. Consumer sentiment and expectations are predicted to remain largely unchanged. due to strong unemployment acting as a tailwind on sentiment but, expectations have worsened due to rate hikes and high inflation.

The National Bureau of Statistics will release China’s CPI data for July. In June, China experienced a small increase in prices due to added consumption demand after lockdown measures were eased. Consensus estimates for July are 2.4% year-over-year and –0.1% month-over-month.

NBS will have their PPI release for July alongside the CPI print. Producer prices have experienced continuous decreases from the start of China’s lockdown measures in March. PPI is forecasted to further decrease to 6.0%, down from 6.1% year-over-year.

The Office for National Statistics will release their advance GDP data for the second quarter. The U.K.’s economy remained resilient throughout the first quarter, growing by 8.7% year-over-year. Consensus is expecting the economy to continue expanding by 9.0% year-over-year.