Equities: The S&P 500 was up over 3% on Wednesday after Powell implied smaller rate hikes can come as early as December. We saw a strong jobs report and higher than expected wage growth which drove the market lower at the open on Friday, followed by rally back up, leading the index to close above the 200-day moving average. With earnings behind us, investors will look to the CPI release on December 13 and FOMC rate decision the following days as the next key market catalysts.

Fixed income:  The jobs report caused rates to spike, with the U.S 10yr crossing above 3.6% before sliding lower and closing just below 3.5%, a 20bps decline compared to a week ago. The next rate decision is still a week and a half away, and although the tight labour market will likely keep inflation high, it will be difficult for the Fed to pivot from the 50bps rate hike they’ve been indicating for December.

Commodities: Oil fell on Friday as the European Union agreed on a price cap of $60 for Russian seaborne oil. but finished the week up over 5% as investors await the OPEC meeting on Sunday and become more positive on China as COVID restrictions begin to ease. 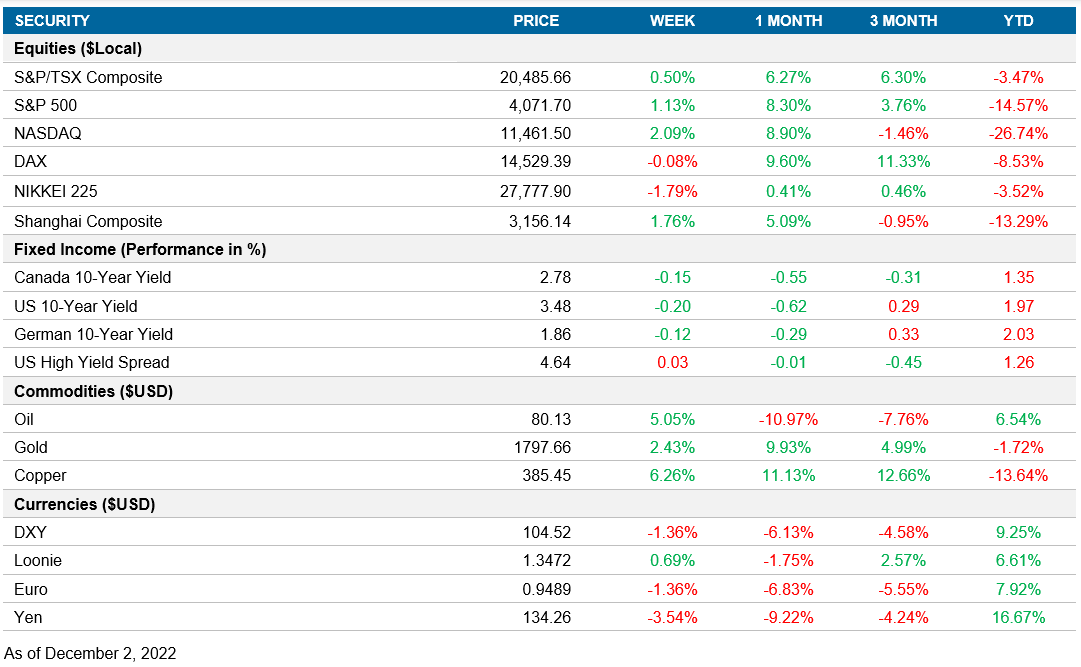 Canada’s annualized GDP grew 2.9%, ahead of the expected 1.5% gain as inventories grew sharply, which may not be a sustainable driver going forward. The other details were not as encouraging as domestic demand fell by 0.6% and household consumption fell by 1% on  an annualized basis. The stronger than expected gain this quarter will slightly increase the odds to another 50bps interest rate hike from the Bank of Canada next week.

The Canadian unemployment rate for November came in  at 5.1%, decreasing slightly from 5.2% a month ago as the labour market remains tight. The more positive news was  the jump in average hourly earnings from last month was repeated, as the growth was unchanged at 5.6%. Overall, the expectation is for a 25bps rate hike next week with a smaller probability of a 50bps hike.

The number of job openings in the U.S dropped to 10.3 million in October, in line with the market expectations. Job openings in state and local government (ex teachers) was down -101,000, while non-durable good manufacturing fell -95,000, but we did see an increase in other services and finance/insurance jobs.

The U.S economy added 263K jobs in October, ahead of market forecasts of 200K, but still the lowest gain since April 2021 as the labour market starts to normalize. The more important figure was the average hourly earnings, which rose by 0.6%, above the 0.5% in October and well above the 0.3% market estimate. Marking the strongest increase in ten months.

Japan’s unemployment rate was unchanged at 2.6% in October, missing expectations of an improvement to 2.5%. Meanwhile, the jobs to application ratio rose to 1.35 in October, improving for the tenth straight month and hitting the highest reading since March 2020

China PMI moved up to 49.4 in November from 49.2 in October and marks the fourth straight month of a fall in factory activity with the new wave of COVID cases, new orders were under pressure and foreign sales were weak.

Europe’s preliminary estimates for CPI slowed to 10% in November from the record highs of 10.6% and coming in below market forecasts of 10.4%. As expected, the cost of energy fell, while prices for food, alcohol and tobacco rose. This is the first slowdown in inflation since June, but the rate remains multiples above the ECB’s 2% target.

Next Wednesday, the Bank of Canada will meet to decide  the new level for the Canadian reference rate. After surprising with a 50bps hike in October, the market implies that the bank will raise another 25bps. The ease in expected hikes indicates that the monetary authority not only has to control the price evolution, but also generate sustainable growth, aiming “to promote the economic and financial welfare of Canada.”

No notable releases during the week.

On Friday, the National Bureau of Statistics will release the main price indicators of China. The market consensus is that the CPI year-over-year will decrease from 2.1% to 1.6%. On the PPI side, the market expects that the producer prices remain with a negative year-over-year change, decreasing from -1.3% to -1.5%.