Equities: The S&P 500 closed the week down 3.4%, led by a ~8.5% decline in energy following two weeks of U.S market gains, as investors remain focused on the CPI print next Tuesday and the implication on the Fed rate decision the following day. A surprise in the inflation data next week could lead to a 75bps rate hike instead of 50bps that is currently expected. The drop in oil prices drove the Canadian markets lower as they fell 2.5% for the week.

Fixed income:  Markets will be watching the inflation print next Tuesday as central bankers need to see inflation continue to decelerate before slowing the pace of rate hakes. As investors await next week, we saw fluctuations in the U.S 10yr rate but no large move week over week as the rate closed ~9bps higher. We saw similar movement in Canadian rates as the Bank of Canada decision for a 50bps hike was in line with expectations.

Commodities: Markets had worried that a price cap on Russian Oil and European embargo would lead to a spike in oil prices when the two measures took place on Monday. However, oil prices fell over 10% this week, the worst week in nearly eight months as the greater concern of a global recession and lower demand from China drove prices lower. 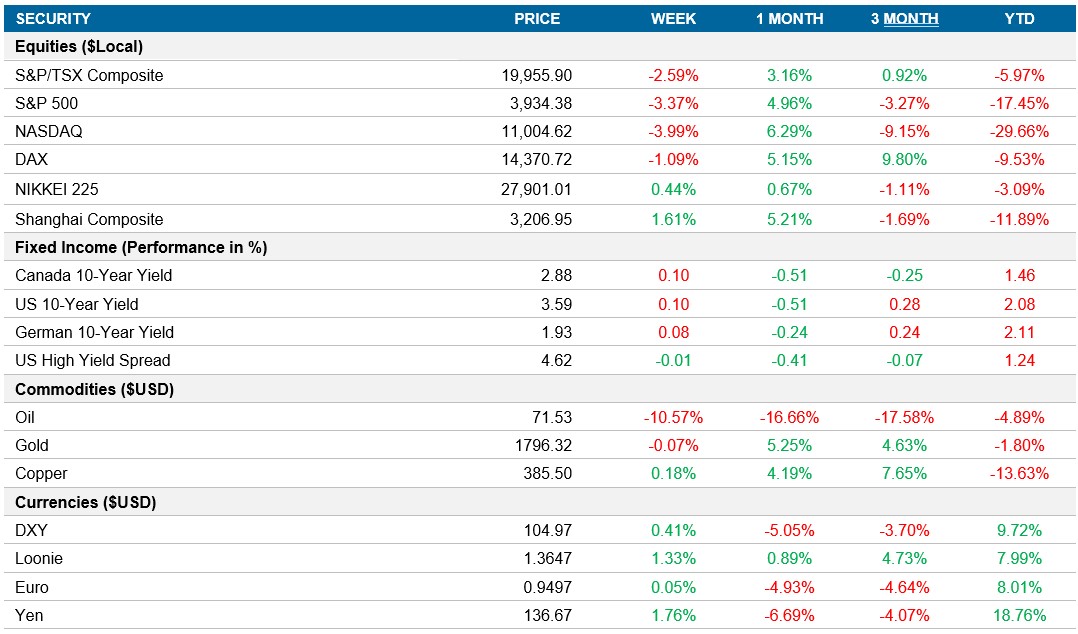 Bank of Canada raised the target overnight rate by 50bps to 4.25% this week, in line with market expectations and leading to the highest borrowing costs since 2008. Policymakers commented that economic growth remains strong and is expected to stall through the end of this year and the first half of 2023. The labour market remains tight, and inflation is still too high with no change expected in the short term. Looking forward, the BoC will be assessing whether interest rates need to rise further to return inflation back to target, an indication that the policy tightening cycle could be near its end.

International – China’s CPI was in line with market estimates and PPI drops 1.3% YoY

China’s inflation fell from 2.1% to 1.6% in November, in line with market estimates. This marks the lowest number since March, driven by a slowdown in the cost of food, as the easing of pork prices caused the category to fall from 7% to 3.7%. Non-food inflation remained unchanged at 1.1%.

China’s PPI dropped 1.3% year-over-year in November, the same pace as a month ago and slightly below the 1.4% estimates. This was the second consecutive month of decline in factory gate prices as strict COVID rules led to weaking domestic demand. Consumer goods inflation for items like; food, daily use goods and clothing all advanced further.

No Notable releases during the week.

On Tuesday, the entire market will be focused on the release of November's CPI. After a higher-than-expected reading last month, the expectation is that the YoY Headline Inflation will keep decelerating to 7.3% from 7.7%. This will be a crucial input for the FOMC meeting on Wednesday. The market is almost certain that the Fed will hike the reference rate by 50bps after Powell's remarked "the time for moderating the pace of rate increases may come as soon as the December meeting." By the end of the week, two leading indicators of Growth will be released. On Thursday, retail sales data will be released, and expected to contract by 0.1% month-over-month, and on Friday, the S&P Global US Manufacturing is expected to slightly increase to 47.8 from 47.7.

After achieving a record-high inflation of 11.1% in the U.K., the Office for National Statistics will release November’s CPI, which is expected to decrease to 10.9%. On the following day, the BoE will have its policy meeting to determine the new policy rate level. The market consensus is that the central bank will do a 50-bps hike, increasing the bank rate to 3.5%. By the end of the week, S&P Global will publish a new reading of the U.K.’s Manufacturing PMI survey, expected to remain constant at 46.5.

The European Central Bank (ECB) will also have its December meeting during this week. In line with most of the developed central banks, it is expected that the ECB will hike their reference rate. The market consensus is that the bank will increase the Deposit Facility Rate by 50 bps. Continuing with the publication of the global manufacturing Purchasing Managers' Index, S&P Global will publish the Eurozone preliminary estimate. The market consensus is that the European index will remain unchanged at 47.1.

In China, the market consensus is that Retail Sales will continue with their negative trend, expecting the National Bureau of Statistics to publish a YoY decline of 3.9%.

S&P Global will also release Japan’s Jibun Bank Japan Manufacturing PMI. The new reading will confirm the shrinkage in the manufacturing sector after entering into contractive territory in December, with an index value of 49.0.