Fixed income:Volatility in yields continued during the week, with the European Central Bank first declaring a 50-bp hike and then the US Services and Composite Purchasing Managers’ Indices coming in at contractionary levels on Friday.

Commodities: The price of oil dropped for the fourth week in a row, as recessionary narratives continue to gain traction. Mining firms are starting to project lower copper production, causing the price of copper to rally. 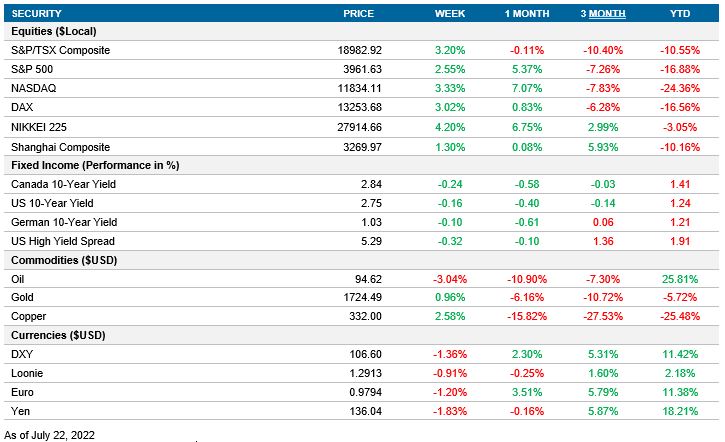 Housing starts slightly weakened in June but remained strong overall. The figure came in at 273.8K new units, down from a revised figure of 282.2K in May. This was above consensus estimates of 266.6K. The decrease in housing starts was caused by lower urban starts, which declined by 3.0%. Interestingly, Toronto, Vancouver, and Montreal all posted higher starts overall—despite the decrease in urban starts. Toronto and Vancouver witnessed higher multi-unit starts but Montreal saw higher single-detached starts.

Housing starts fell below consensus expectations during the month of June. The reading came in at 1.55M units, down from 1.59M the prior month. Single unit housing starts fell by 8.1% to 982K and were the primary driver behind the decline. Rate hikes have made housing less affordable and less attractive as prospective investments. Housing starts that contained five or more units experienced an increase of 15% to 568K. Multi-unit buildings are currently the more attractive investment as owners seek to exploit rising rental prices.

IHS Markit released its Flash U.S. PMI data for July. The manufacturing PMI remained expansionary at 52.3, hitting a two-year low. Input costs increased alongside output costs as manufacturers sought to pass on extra costs. Order backlogs continued decreasing alongside demand, as new orders are failing to keep up with the rate of production. However, new orders remained expansionary and sentiment barely managed to stay positive alongside this statistic. The services PMI fell into contractionary territory with a figure of 47.0. Weakened demand, lower order backlogs, and higher inflation harmed the services industry. The composite PMI also fell to contractionary levels with a reading of 47.5.

Germany’s Producer Price Index reported decreases for the month of June. PPI fell below consensus estimates to 32.7% year over year and 0.6% month over month. This is consistent with IHS Markit’s PMI readings for June, in which German manufacturers were outliers to the rest of Europe and reported lower input costs. The primary driver of PPI continues to be energy, which rose by 86.1% year over year. Heightened metal costs are also a concern, with ferro-alloys rising by 42.0% year over year and non-ferrous metals rising by 24.7%. Meat prices (other than poultry) remained high with an increase of 19.1% year over year, which lowered profits for non-durable goods producers. Lower PPI readings may be a sign that German inflation is starting to peak.

The ECB Governing Council decided to raise the overnight target rate by 50 bps to 0.0%. This move was 25 bps higher than consensus estimates. Joining the struggle against inflation alongside other developed markets, the ECB decided to work toward normalizing interest rates—taking the overnight target rate out of negative territory, with its first hike in 11 years. As an added measure, the ECB established the Transmission Protection Instrument, or TPI for short. The TPI enables the ECB to purchase securities (deemed eligible through a list of criteria) to help stabilize prices and normalize monetary policy across the whole eurozone aggregate region. Guidance from the ECB implies that rate hikes will continue for subsequent meetings and that the ECB wants inflation to reach its 2.0% target during the medium term.

Japan’s CPI data held steady for the month of July. CPI rose by 0.0% month over month and 2.4% year over year. Japanese inflation is in sharp contrast to other developed economies where inflation remained high and, in many cases, continued increasing. As long as inflation remains near a healthy level, we can expect the Bank of Japan to continue its dovish stance. At the BoJ’s most recent rate meeting, the central bank kept rates negative at –0.1% and provided dovish guidance that rates will remain largely unchanged for the foreseeable future.

IHS Markit’s Flash Germany PMI data for July surprised on the downside. All readings fell to contractionary levels. The manufacturing PMI fell to 49.2—a 25-month low—the services PMI fell to 49.2, and the composite PMI fell to 48.0. Inflationary pressures managed to catch up to German manufacturers, driving up input prices. Output prices also increased—albeit at a slower rate than input. Firms reported a second sequential fall in new orders, which was also the largest fall in the last two years. Expectations are now pessimistic, with confidence falling to lows not seen for two years.

IHS Markit’s Flash Eurozone PMI told a similar story to Germany’s. All readings recorded drops but the services industry managed to barely stay in expansionary territory. The manufacturing PMI fell to 49.6, the services PMI fell to 50.6, and the composite PMI fell to 49.4. Manufacturing output saw a sharp fall because of underperformance found in German and French factories. Services output managed to stay slightly positive, due to summer months bolstering tourism. New orders and backlogs both fell for the first time in nearly a year and a half. Like Germany, expectations have fallen to lows from two years ago.

The U.S. Federal Reserve will make its interest rate decision on July 27. With the recent strong employment data and steadily rising inflation, economists are expecting the Fed to make another 75-bp hike. Whilst a 100-bp hike is possible, the American economy is already starting to slow down, and consumer confidence has been low throughout the previous month.

The Bureau of Economic Analysis will publish preliminary GDP data for the second quarter. Economists are forecasting GDP to increase by 0.4% quarter over quarter. Supply chain issues, high inflation and steady tightening caused the American economy to experience a 1.6% contraction during the first quarter.

Germany’s ifo will release their business climate data for July. The business climate index is expected to fall to 90.2. Germany’s narrative changed after the recent PMI release and economists are expecting both the expectations and current situation index to decline.

Destatis will release Germany’s CPI data for July. The recent PMI readings caused the consensus estimates to become more bleak, with economists forecasting inflation at 0.6% month over month, up from 0.1%.

The Ministry will publicize Japan’s retail sales data for June alongside the industrial production release. Japan’s retail sector has had consistently robust performance for the past three months, outperforming consensus estimates for the timeframe. Retail sales are forecasted to grow by 2.8% year over year, down from growth of 3.7% the month prior.

Destatis will have Germany’s first preliminary GDP estimate for the second quarter. The German economy has managed to stay strong despite the harsh increases in the prices of carbon-fuel products. Economists are expecting GDP to grow by 1.8% year over year and 0.1% quarter over quarter.

Eurostat will have its preliminary CPI release for July. The eurozone’s inflation is expected to increase to 8.7% year over year, up 0.1% from June. The growing consensus is that inflation is starting to peak or has peaked, as recessionary narratives become more prevalent for Europe.

Eurostat will have its first preliminary GDP estimate for the second quarter. The eurozone aggregate region managed to stay resilient during the first quarter, with GDP estimated to be 5.4% year over year and 0.6% quarter over quarter.