Equities: After some ups and downs this week, the market had one of its best weeks since July 2022. This was driven by 10-year yields coming off the highs and strong Q3 earnings from several big banks and tech giants. We ended the week with increased volatility and a nearly a 3% swing in the S&P 500 as the yield on the 10y UST fell over 10bps from the 4.33% high and $2 Trillion in options expired.

Fixed income: Treasury yields continued to move higher as inflation remains elevated, the curve’s shorter end continued to react more as 3month treasuries jumped by 28bps and the yield on the 10y UST increased by 20bps. In Canada, bonds reacted to the elevated CPI release with both the 3months and 10yr government bonds increasing by over 10bps.

Commodities: After a big negative drop last week, oil had a relatively quiet week, down less than 1% even as the concerns of a global economic slowdown loom. Gold fell in the first half of the week and hit lows that we haven’t seen in nearly 2 years. The lows were met with some buying as some investors believe that Gold is attractive at these levels given the possibility that the Fed’s path may change in the medium term. 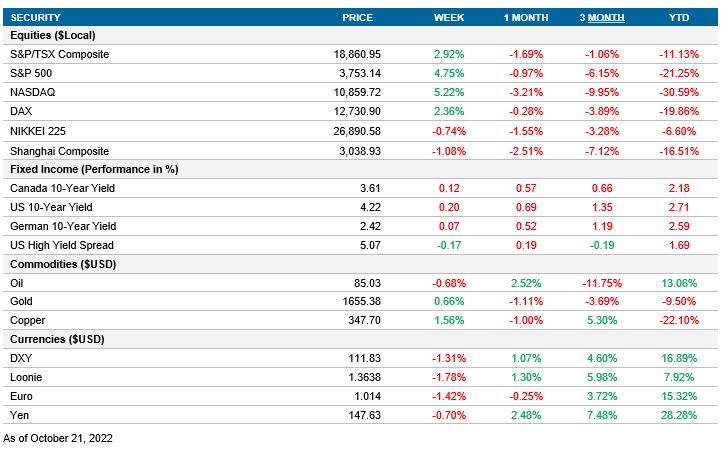 Retail sales came in stronger than anticipated in the month of August at 0.7%. That along with the preliminary estimate of a small decline in September and the overall CPI print, increases the likelihood of a 75bps rate hike next week as higher rates have yet to put pressure on consumption.

The UK Office for National Statistics reported CPI data for September. The YoY inflation rate for the UK accelerated from 9.9% in August to 10.1% in September. This reading revisits the 40-year high that we saw back in July of 2022 and supports the view that the Bank of England will raise interest rates by 100bps (from 2.25% to 3.25%) at their next policy meeting on November 3rd. The increase was widespread with core goods increasing 0.4% MoM and services by 0.2% MoM, leading to a 30-year high of 6.1%.

British Prime Minister Liz Truss announced on Thursday that she was stepping down after taking over the role of PM 44 days ago. This comes after a tumultuous couple of weeks, where we saw the replacement of Kwasi Kwarteng as Chancellor of the Exchequer, an abandonment of Truss’ fiscal plan by Kwasi’s replacement (Jeremy Hunt) and departure of cabinet members. The party will now complete a new leadership election within the next week.

Annual inflation in Japan remained unchanged MoM and still hovers around the 8-year high figure. Upward pressure came from the increase cost of food, fuel, electricity, gas, furniture and household utensils. The 3.0% YoY increase is the most since September

After releasing a higher-than-expected CPI, the Bank of Canada will decide on the new level of the reference interest rate. The latest CPI data reinforced the idea that the BoC will hike another 75bps instead of 50bps, as some market participants expected before the release. Even though growth is slowing down, the BoC governor commented that they would consider pausing the rate increase when there is clear evidence that core inflation is slowing down.

In the coming week, we will have two crucial indicators to understand the pace of growth of the U.S. First, the Manufacturing PMI will serve as an early indicator to assess the economy’s expansion. Despite the last reading being in the expansion zone (above 50), the index is expected to continue with the downward trend, forecasting a value of 51 for October.

In addition, the release of the Q3 GDP will guide the market on the impact of the Fed’s contractive monetary policy. The U.S. GDP contracted by -1.6% and -0.6% in the previous two quarters, respectively. Even though the tightening of the economy will directly impact future growth, the market expects the American economy to expand by 2.3% in the third quarter.

In addition to the U.S. manufacturing PMI, S&P Global will also publish the Euro areas and UK PMI. These new releases will be crucial to understand the pace of growth of the different economies. Both regions are expected to continue their negative trend in the contractive area. The forecasted market consensus for the Euro Area's manufacturing PMI is 47.9, and for the U.K., 48.0.

The European Central Bank will have its next monetary policy meeting on Thursday. Even though the latest activity indicators demonstrated that the European economy is slowing down, the ECB's priority is to bring down the inflation rate. The implied market expectations are that the ECB will hike the reference rate by 75bps.