Equities: The U.S market resumed its trend from last Friday, climbing over 2.5% in the first two trading days as 10yr yields continued to retreat from the highs and back towards 4.0%. Earnings released midweek from Microsoft, Alphabet and Meta forced the market to give back most of the gains we saw early in the week. The market ended the week strong and finished up 3.95% as mixed earnings from Amazon (Negative) and Apple (Positive) were outweighed by the positive economic data as personal consumption expenditure price index rose less than expected.

Fixed income: The long end of the curve rolled over from the highs as the 10yr UST decreased ~20bps to 4.0%, while the short end of the curve climbed higher, crossing the 4.0% mark and moving above the 10yr UST to end the week. Canadian Bond rates also fell this week by ~40bps for the 10yr and ~15bps on the 3 month as the Bank of Canada surprised by only hiking 50bps vs the expected 75bps.

Commodities: Had a strong week but the 3-day rally took a breather on Friday as oil fell to just above $88 due to a strong USD and weak outlook from China. Crude was still up 3.6% this week in the midst of extreme tightness in U.S refined products market. Tight fuel inventories heading into the winter months strengthened crude through the middle of the week as the markets processed mixed earnings results. 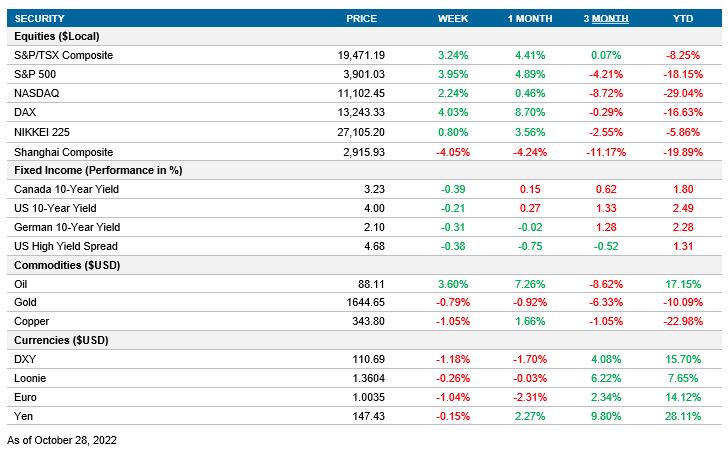 After a few months of communicating that core inflation was their central focus and following a higher-than-expected CPI last week, the BOC rate hike of 50bps came in below expectations of 75bps. The Bank stated that the economy is still operating in excess demand and the labour market remains tight, but the policy rate increases are impacting interest sensitive areas and household and business spending is softening.

The Bank downgraded GDP forecasts and is expecting growth to slow from 3.3% in 2022 to 0.9% in 2023, cutting their previous GDP forecast in half. They also reiterated that due to inflation concerns, the policy rate will need to rise further and will be influenced by their assessment of how a tighter monetary policy is working to slow demand, if supply challenges are improving and how inflation is responding. Expectations are for additional rate hikes of 25 bps in the next 2 meetings, taking the policy rate to 4.25%

US Manufacturing PMI felt to 49.9 in October from 52, which was meaningfully below the market forecast of 51 and the first contraction since June 2020. New orders shrank, which signalled a decline in demand as manufacturers pointed to the impact of high inflation and supply build up from the previous year.

U.S GDP came in at 2.6% as it was lifted by net external trade up nearly 2.8%. The net external demand was partly driven by a 14.4% gain in exports, however with a weak global economic backdrop and strong dollar, expectations suggest exports will flatline or fall in the near term.

Consumption growth was up 1.4%, falling from 2.0% but above expectations of 1%, as service consumption helped offset the weaker goods consumption. High borrowing costs caused residential investment to decline by 26.4%. Overall, the 2.6% GDP figure was a better-than-expected headline number, but likely won’t be sustained as export growth fades and domestic demand continues to fall from the pressure of higher rates.

Euro PMI fell to 46.6 in October from 48.4 the month before and missing estimates of 47, which is the fourth consecutive contraction. Production fell to a nearly 2-year low, due to the impact from higher energy prices. New orders also declined the most since April 2009 (excluding the start of the pandemic). Looking forward, confidence remains muted due to the uncertainty of energy prices and rising living costs.

UK Manufacturing PMI fell to 45.8 from 48.4 in the previous month and was meaningfully below estimates of 48. Like the Euro Zone it was the lowest rating since the summer of 2020 and was driven by a sharp fall in production due to supply bottlenecks and lower demand. The economic downturn has alleviated some of the upward pressure on prices, but the weaker pound and higher energy costs are limiting that decline. The deteriorating outlook on growth and political uncertainty led to business confidence to fall to a 2.5 year low.

The ECB raised policy rates by 75 bps as expected, with further increases in the coming months. There is no clear direction on how high the rates may rise (currently at 1.5%) but there is an expectation that rates may get as high as 3% as early as next year, which would be faster than what’s currently priced into the markets.

China’s GDP growth increased from 0.4% last quarter to 3.9% this quarter, well ahead of the 3.3% estimates. The outlook in China remains gloomy as President Xi filled his leadership ranks with loyalists meaning they are not likely to lift the zero-COVID policy in the near term, no real relaxing of the policy before 2024, and the possibility of continued widespread lockdowns may persist.

In Japan, unemployment was expected to remain unchanged from 2.5%in August, however September unemployment came in at 2.6%. Tokyo’s consumer prices excluding fresh food increased by 3.4% in October compared to the estimates of 3.2%, an increase from 2.8% last month. This marks the first-time inflation has crossed 3.0% in over 30 years. Unlike global peers who have been consistently hiking rates, the Bank of Japan decided to keep rates unchanged at -0.10% even as inflation crossed the 3% mark.

Two economic indicator releases this week will guide the market on how tight monetary policy is impacting Canadian growth.  First S&P Global will announce October’s Canadian Manufacturing PMI. In the previous month, the index increased to 49.8 from 48.7. Despite the improvement, the index remains in the contraction zone (lower than 50), which indicates that the manufacturing sector deteriorated during September.

Then October’s Labour Statistic report will indicate if the Canadian Job market continues to be as tight as in the previous months. Canada’s employment increased by 21.1K during September, slightly above the 20K expected. The unemployment rate was 5.2% in September, down from 5.6% in August.

The big event of the week will be the next meeting of the Federal Open Market Committee. After an inflation reading that continues with its upward trend and a GDP growth higher than expected, the market expects theFed to raise its reference interest rate by 75 basis points. In addition, the market will pay special attention to Jerome Powell’s press conference, expecting some guidance on future monetary policy.

At the end of the week, the Bureau of Labor Statistics will release October’s labor report. The previous strong employment report showed a decrease in the unemployment rate to 3.5%, and a decline in the participation rate to 62.3%. The change in Nonfarm Payrolls surprised to the upside, increasing by 263k compared to 315k in July.

The Euro Area will also release its labour report this week. Even though the market is worried that the ECB tightening is impacting Europe’s growth, the consensus is that the unemployment rate will be unchanged at 6.6%, consistent with the previous release.

In addition to Canada’s manufacturing PMI, China will also release both manufacturing PMIs (official and private). These new releases will be crucial to understand the pace of growth of the Asian economy following a higher-than-expected GDP release  the previous week.

The United Kingdom will have its first BoE meeting following the resignation of Liz Truss as Prime Minister. After a week of volatility in the U.K. markets, the implied expected hike for the central bank meeting is 75 basis points.