Equities: Global equities had a positive week after three weeks of negative performance. In the U.S., stocks had their best week since late July, as investors took advantage of attractive valuations.

Commodities: West Texas Intermediate finished the week around $86 a barrel, almost no change compared to the previous week. Crude Oil is about 40 dollars below this year’s high, but the market continues to be very volatile since Russia’s invasion of Ukraine. 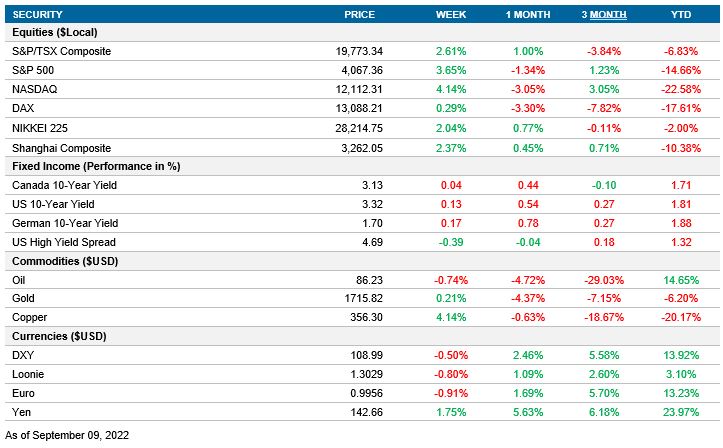 In line with market consensus, the Bank of Canada increased the reference rate by 75bps, setting the Overnight Lending Rate at 3.25%. This new level should help control inflation given that it is above the 2% - 3% neutral rate bank’s estimate. The central bank highlighted in its policy statement that it “still judges that the policy interest rate will need to rise further.”

Statistic Canada released August’s Labor Force Survey with an increase in unemployment to 5.4% from the previous level of 4.9%. This change was partially explained by the immigration-fueled labor force increase of 66,000 workers. The fall in employment was primarily explained by a contraction in the public sector.

S&P Global Services PMI continued declining across the U.S. service sector with a value of 43.7 from the 44.1 published the previous month. Weak domestic and foreign client demand drove a decrease in new orders that pushed the output into a faster decline. Regarding the pricing of the services, input cost and output charge inflation rates decreased to lowest level in 18 months.

At a new monetary policy meeting, the European Central Bank decided to hike its deposit rate 75 bps from a level of 0%. The ECB President Christine Lagarde mentioned in her speech that “If the data on our meeting-by-meeting exercise review suggests that we should take a high hike of our interest rates, we will do so”. This is in line with previous Governing Council comments confirming that the ECB’s focus will be to return inflation back to 2% medium term target.

The National Bureau of Statistics of China released August’s Consumer and Producer Price Indexes. The CPI increased 2.5% from a previous growth of 2.7% and a consensus expected value of 2.8%. Below expectations, the PPI rose 2.3% from July’s increase of 4.2%. This slower pace of inflation gives the Central Bank room to decide if it will keep its dovish monetary policy at next week’s meeting.

The Bureau of Labor Statistics (BLS) will release August’s CPI data. Economists are expecting inflation to decelerate. Forecasts expect a reading of 8.0% year over year and -0.1% month over month. Given that the Fed is data-dependent, August’s release will be critical for the interest rate decision at the next FOMC meeting on September 21.

The BLS will publish August’s PPI on September 14. After a decline in July, this new data will confirm if the inflation pressures are moderating. The consensus expectation is MoM contraction of 0.1%.

The US Census Bureau will release the August data of the monthly advance sales for Retail and Food Services. After being virtually unchanged last month, the market expects another flat month with 0% growth. Even though retail trade sales showed no growth on the previous month, they are at a level 10.1 higher than the previous year.

The Bank of England has decided to push the next policy rate meeting one week to September 22. This gives the BOE more time to analyze the new economic data that will be distributed next week. UK Office for National Statistics will release July’s unemployment rate, after presenting no change between May and June level (3.8%).

On Wednesday, the UK Office for National Statistics will publish August CPI after publishing a double-digit reading of 10.1% in July. The major risk will be that these inflation levels will push workers and firms to increase their expectations of future wages and price gains.

The National Bureau of Statistics of China will release August’s Industrial Production change. This new value will provide a hint about the growth path of the Asian economy that is closely monitored by the government following their recent stimulus package to reactivate the economy. In addition, the Industrial Production Growth will guide the People’s Bank of China in the decision to increase their lending rate.