Equity markets climbed marginally this week. Russia said it would scale back military operations as talks with Ukraine continued. In terms of data, U.S. employment numbers came in strong once again, indicating an economy that is running hot and reinforcing U.S. Federal Reserve Chairman Jerome Powell’s rhetoric that the economy can withstand the coming rate hikes. Euro area inflation numbers were also released, with inflation soaring in March mainly on higher energy costs.

Yields fell for the week, breaking the three-week spree when yields soared. Market attention will be on the upcoming Fed and European Central Bank minutes.

Oil prices declined as U.S. President Joe Biden announced another oil reserve release, this time the largest release ever. The plan would see a million barrels of oil released per day for six months, totalling 180 million barrels. This would account for approximately 5% of domestic oil consumption. Oil prices were also impacted by concerns of slowing growth in China as that nation faces a renewed COVID wave. 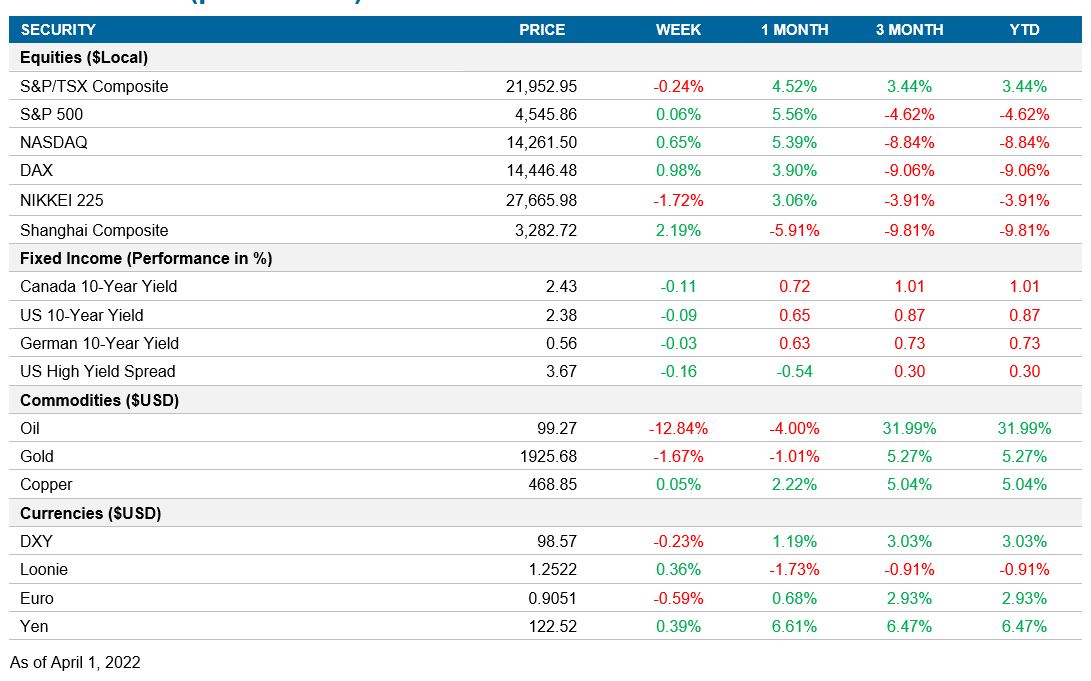 The CFIB Business Barometer rose to 65.1 in March, from 62.5 in February. Business confidence rose broadly across provinces, but firms continue to report shortages of both labour and input products as limits on production. The survey, however, was issued toward the beginning of the month and may not have captured the effects of the Russia-Ukraine war.

Real GDP grew 0.2% in January, even as much of the economy was in lockdown. Goods producers increased 0.8%, while service providers were flat as high-touch sectors felt the effect of the Omicron variant. Utilities output rose a strong 4.0% for the month due to cold weather, while the hardest hit sector was accommodation and food services, which contracted 11.5%. StatsCan estimates that GDP expanded a further 0.8% in February, with notable increases in manufacturing, mining and oil, and accommodation and food services.

The S&P Global Canada Manufacturing Purchasing Managers’ Index rose to the highest level recorded in the over 11-year history of the survey, of 58.9 in March from 56.6 in February. Output and new order growth accelerated, and firms positioned themselves by increasing inventory over concerns of input shortages and delays. Firms increased production and hired at an accelerated pace. Prices meanwhile continued to rise, as the Russia-Ukraine war resulted in price hikes for fuel, transportation, and metal.

Nonfarm payrolls rose by 431K jobs in March, following the upwardly revised 750K in February. Hiring continues to come in strong, with employment in the services sectors rising 366K, led by professional and business services, education and health services, and retail trade. The unemployment rate fell by 0.2% to 3.6%, comparable to the 3.5% pre-pandemic level in February 2020. The participation rate, however, remains a whole percentage point below pre-pandemic levels at 62.4%.

The Conference Board Consumer Confidence Index rose to 107.2 in March, from a 105.7 reading in February. Consumer views of the current situation were supported by strong employment growth, even amid concerns about rising prices and further declining purchasing intentions for big-ticket items on higher interest rate expectations. Inflation expectations reached an all-time high of 7.9%.

The official China Composite PMI fell within contractionary territory with a reading of 48.8 in March, from 51.2 in February. The manufacturing PMI fell to 49.5 from 50.2, while the non-manufacturing PMI fell to 48.4 from 51.6. The survey shows deteriorating conditions in China as the country faces renewed outbreaks as curbs in various regions are dampening production and consumption. Output and new orders fell. Employment decreased slightly, and prices rose on rising costs.

The Bank of Canada will release a new iteration of the Business Outlook Survey, outlining how companies are faring, as well as reporting hiring and capital expenditure expectations.

The focus for the week will be on the Labour Force Survey. Employment is expected to continue to gain a solid 65K in March, normalizing following February’s 337K on the reopening.

Factory orders are forecasted to show a slight decline of 0.6% for February, which would be the first decline in nine months.

The March Fed meeting saw another hawkish turn from officials, now signaling as many as six more hikes for the year. The minutes may include details on the balance sheet run-off, and how the Fed interprets the reduction in terms of tightening. Fed officials may see the need for less hikes in conjunction with the run-off.

German industrial production could have further rebounded in February. However, supply constraints and higher costs could have restricted a recovery.

The ECB’s minutes will be of particular interest for markets. Similarly as to the Fed, the ECB came out more aggressively toward rising inflation, signaling an accelerated wind-down of bond purchases and even the possibility of a rate hike later this year.