Stocks declined for the week on hawkish central bank signals, a shortened week for North American markets due to statutory holiday. The Bank of Canada raised rates by 50 basis points, started quantitative tightening, and indicated the need for more hikes. The European Central Bank confirmed it was looking to end asset purchases sometime in the third quarter, which would open the path to rate hikes. The U.S. consumer price index rose and various U.S. Federal Reserve officials highlighted the need for front-loading interest rate increases and indicated that a 50-bp hike could come.

Oil prices rose as Chinese authorities looked to ease restrictions and to bring forward pro-growth policies to stimulate the economy. China had also hinted at further monetary policy support, such as another reserve requirement ratio cut. Over in Europe, oil benefitted on news that the European Union is moving toward phasing in a ban on Russian oil. Gold rose on a higher U.S. inflation print. 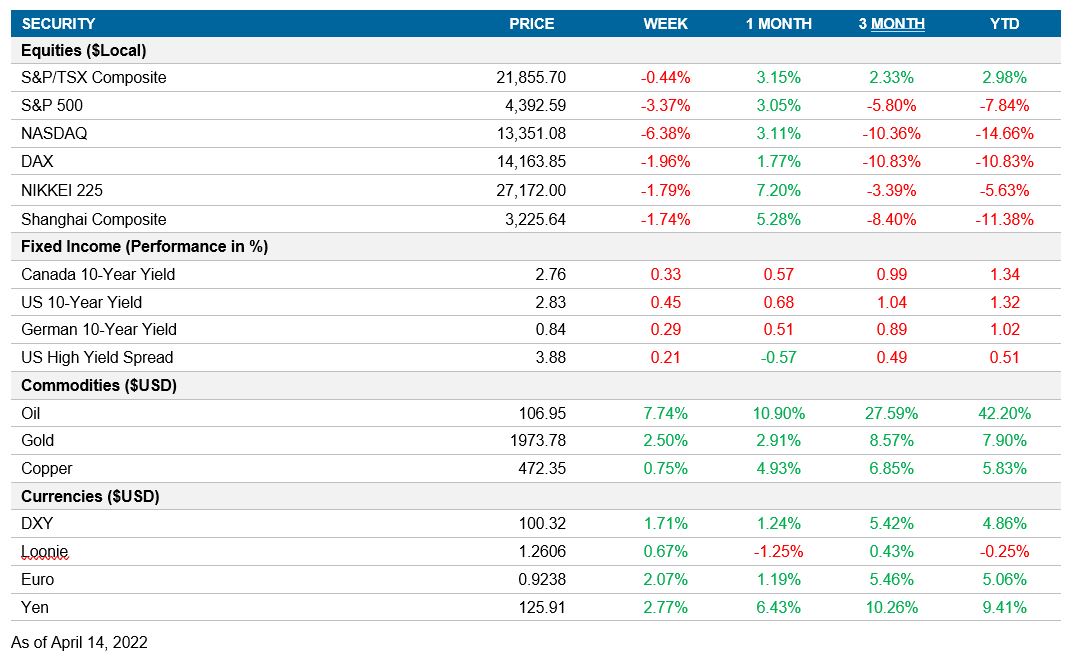 The Bank of Canada raised its policy interest rate by 0.5% to 1.0%. Inflation has remained elevated and price pressures have broadened. The central bank now expects inflation to average around 6% in the first half of the year and remain above its target range throughout 2022. Governor Tiff Macklem said that the BoC’s Monetary Policy Committee expects that rates will have to increase further, possibly above the neutral rate estimated to be between 2%–3%. At the same time, the central bank announced ending reinvestment and beginning quantitative tightening starting April 25, a process that would shrink the bank’s balance sheet. The balance sheet reduction would happen passively as bonds held by the central bank mature, with an estimated 40% of bonds on the balance sheet set to roll off over the next two years.

Manufacturing sales rose 4.2% in February. The increase was driven by motor vehicles, with sales recovering 25.0% in the month following a 17.7% decline in January. Excluding motor vehicles, sales still rose a solid 3.1% in the month. Other areas of strength were electrical equipment (+8.6%), wood products (+8.5%), petroleum and coal (+6.7%), and food manufacturing (+5.3%).

Retail sales rose 0.5% in March. The increase, however, was driven by gasoline station sales rising 8.9%, while retail sales excluding gasoline stations declined 0.2% as consumers shifted spending due to higher gasoline prices. General merchandise store sales rose 5.4%, electronics and appliances increased 3.3%, and clothing grew 2.6%. On the other hand, motor vehicles posted a decline of 1.9%.

The University of Michigan Consumer Sentiment Index rose to 65.7 according to the preliminary reading, from 59.4 in March. Consumer expectations for the year ahead rose on a strong labour market, with expectations that unemployment will continue to decrease gradually. The reading, however, remains relatively low and shows only a slight hint of optimism.

The European Central Bank stated that data had reinforced the need for asset purchases to end sometime in the third quarter. Despite risks to the growth outlook, the upside risks to inflation seem to be more pressing for the central bank, with the ECB citing the risk of higher inflation expectations. The reiteration that asset purchases could end in Q3 heightened expectations that the ECB could hike rates as early as that same quarter, as the central bank had indicated rate increases would start shortly after quantitative easing ended. President Christine Lagarde did not comment on the crisis tool, which is rumored to be deployed by the ECB if yields rise too quickly.

Chinese CPI accelerated to 1.5% year over year in March, from 0.9% in February. The increase was due to base effects as the monthly reading was flat. Food prices declined 1.2% in the month, offsetting increases in other goods.

Chinese exports rose 14.7% year over year in March, in U.S. dollar terms. The reading beat market expectations even with the lockdowns and war in Ukraine, which were expected to affect sentiment.

The Germany ZEW Indicator of Economic Sentiment index fell to -41.0 in April, from -39.3 in March. Assessments of the German economy worsened further following a decline in March in response to the Russian invasion of Ukraine.

Housing starts for the month of March will be available. The reading has declined since last year but has remained stronger than prior to the pandemic amid low rates. Housing starts are a good indicator of the real economy, and March was the first hike from the Bank of Canada that may have impacted the reading.

CPI is forecasted to have risen 1.0% in March, as higher energy prices are expected to have greatly contributed. If accurate, the year over year reading would accelerate to 6.2% from 5.7%.

Retail sales details for the month of February will be available. StatsCan had previously estimated a slight decline of 0.5%.

A renewed iteration of the Fed Beige Book will be released, outlining economic activity trends. There will likely be comments on the impact of the Russian invasion of Ukraine, which could mean amplified inflationary pressure and dampened sentiment. However, the data should still confirm a strong consumer, which could lead to the 50-bp hike markets are expecting.

The preliminary PMI reading for April will similarly provide an update on how firms are faring. The March survey showed activity holding strong despite the war.

Chinese GDP is expected to have risen 4.3% year over year in the first quarter, even as widespread lockdowns started toward the end of the period. The reading would reflect a pick up in activity but would still come short of the 5.5% GDP target for the year, which would indicate the need of further stimulus.

Chinese activity data for March will round out the quarter. Industrial production could have continued strongly despite the lockdowns, while retail sales could have taken a larger hit.

Elsewhere, we have the preliminary Japanese and eurozone PMI surveys for April. Business activity in March had held up well despite the war, but we will watch for indications of higher prices and business confidence.