Stocks continued to decline on hawkish central bank signals. U.S. Federal Reserve Chairman Jerome Powell and European Central Bank President Christine Lagarde were featured on an IMF panel, both signaling appetites for rate hikes. Powell said the labour market was too hot and reiterated that the Fed would take a more expeditious approach to getting interest rates more in line with a neutral stance. Lagarde noted inflation was too high and that the ECB’s June projections would dictate the bank’s actions.

Oil and copper prices fell for the week as growth projections were downgraded. The IMF now expects global growth to be 3.6% for the year, compared to 4.4% previously. The selloff in all assets combined with rising yields also saw gold decline. 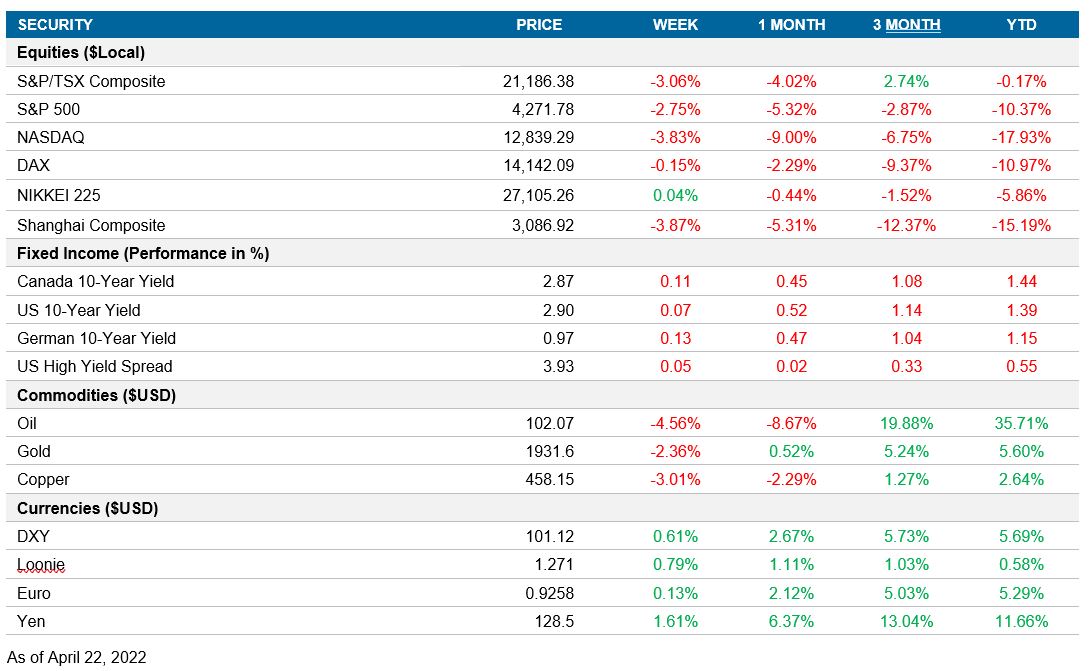 Housing starts remained elevated at 246K units annualized in March, compared to 250K in February. Housing starts are coming off record levels but are still historically strong. The decrease was due to fewer starts in Toronto and Vancouver, offset by gains in other cities.

Canada’s consumer price index rose 1.4% in March, following a 1.0% increase in February. Increases were again widespread in all major index categories, with goods prices rising 2.3% and services rising 0.6%. Transportation led the gain with higher gasoline prices (+11.8%) for the month. The year-over-year reading accelerated to 6.7%. The increase was largely due to gasoline prices rising 39.8%, but food (+7.7%) and shelter (+6.8%) prices have also been on the rise.

The Fed Beige Book noted economic activity expanded at a moderate pace since mid-February. Employment continued to make gains due to strong demand, but hiring was held back overall by the lack of available workers. However, some regions noted some modest improvements. Meanwhile, inflationary pressures persisted, and firms continued to pass rising costs through to customers. Manufacturers in particular noted steep increases in materials, transportation, and labour. There were widespread reports of spikes in prices for energy, metals, and agricultural commodities following the Russian invasion of Ukraine, and COVID-19 lockdowns in China were also a cause of supply chain disruptions.

The S&P Global Flash U.S. Composite Purchasing Managers’ Index declined to 55.1 in April, from 57.7 in March. The Manufacturing PMI rose to 59.7 in April from 58.8, while the Services PMI declined to 54.7 from 58.0. Manufacturers continued to indicate stronger expansion on strong demand even as prices rose, and had a positive outlook on a resolution of supply chain issues and greater capacity. Service providers recorded a softer expansion, amid reports of labour shortages and inflation dampening spending intentions.

Chinese consumer spending decreased as retail sales declined 3.5% in March year over year as the parts of the country faced COVID lockdowns. Industrial production also slowed but showed resilience, growing 5.0% year over year in the month.

For the first quarter, Chinese GDP rose 4.8% year over year, coming in slightly better than market expectations but below the growth target of 5.5% for the year. The jobless rate jumped to 5.8% from 5.1% as of last quarter.

The au Jibun Bank Flash Japan Composite PMI rose to 50.9 in April, from 50.3 in March. The Manufacturing PMI fell to 53.4 from 54.1, while the Services PMI turned expansionary, rising to 50.5 from 49.4. Manufacturers registered continued new order growth, but the rate of job creation declined on soft backlogs and weaker business confidence. Service providers, meanwhile, indicated the first expansion in business conditions since December, though providers still face weak domestic demand. On the other hand, export demand was strong.

The S&P Global Flash Eurozone Composite PMI rose to 55.8 in April, from 54.9 in March. The Manufacturing PMI fell to 55.3 from 56.5, while the Services PMI rose to 57.7 from 55.6. Manufacturing output registered the smallest expansion since the pandemic downturn, suffering from production curbs due to supply constraints and disruptions from the war in Ukraine and China’s lockdowns. Lost orders were also blamed on higher prices. Service providers benefitted from loosened restrictions, led by a boom in tourism and recreational activity.

An update of small business sentiment will be available. The previous survey saw an uptick, but the survey noted that the timing of the responses may not have captured the full effects of the Russia-Ukraine war.

GDP data for February will be available. The reading will be slightly outdated, but will still be important to watch for any confirmation of recovery due to economic reopening. The release will also provide a preliminary estimate for March to round out the quarter.

Durable goods are expected to rise in March on a recovery in transportation. High prices, supply bottlenecks, and geopolitical uncertainty could drag the reading.

The Conference Board Consumer Confidence reading could have risen as labour market strength could offset inflation worries.

The first estimate of GDP will be released, expected to have grown just 1.0% annualized quarter over quarter in Q1 as a consequence of the Omicron variant. Personal consumption should nonetheless have held strong, which would indicate the economy remains resilient.

Lastly, we have personal income and spending details. Personal incomes should continue to inch higher on labour market strength, while consumption could rise as the rotation from goods to services gains traction.

France’s presidential election takes place April 24 between President Emmanuel Macron and his opponent Marine Le Pen. Macron has led the polls and is favoured to win.

German ifo expectations have fallen drastically since the Russian invasion, on slowing growth and higher inflation. There are few expectations of improvements for April.

The Bank of Japan will meet this week. Other central banks globally are dealing with high inflation and are tightening policy as a result. The Bank of Japan, however, faces the opposite issue—subdued inflation, which could see the implementation of further easing measures.

Lastly, we have some readings for Europe. Q1 GDP and April inflation readings for various euro countries will be released. GDP growth is expected to be muted at just 0.3% quarter over quarter. The spread of COVID variants early in the quarter will have dragged, followed by the ripples of the Russia-Ukraine war. Euro-area CPI, on the other hand, risks further accelerating in April to 7.6% year over year, from 7.4%. Energy prices remain a risk, but services prices could also gain as the region benefits from a return of tourism