Stocks declined for the week in the U.S, while Canada eked out a gain. The S&P 500 and NASDAQ recorded their seventh straight weekly decline, their longest losing streaks since 2001 and 2011 respectively. Investors have been concerned about slowing growth and the negative impact of higher costs on corporate earnings. Asian markets got a boost as Chinese stimulus measures ramped up toward the end of the week. Banks there implemented a record cut to a key interest rate for long-term loans to help bolster the property sector amid a rapidly slowing economy.

Yields declined as investors mounted bids for safe-haven assets, led by continued negative sentiment on equities plus concerns around the effects of tightening central bank policy on economic growth.

Oil posted its fourth straight weekly gain due to strong demand and tight supply. Prices are up over 50% for the YTD period. Copper and gold both appreciated, breaking multi-week losing streaks. 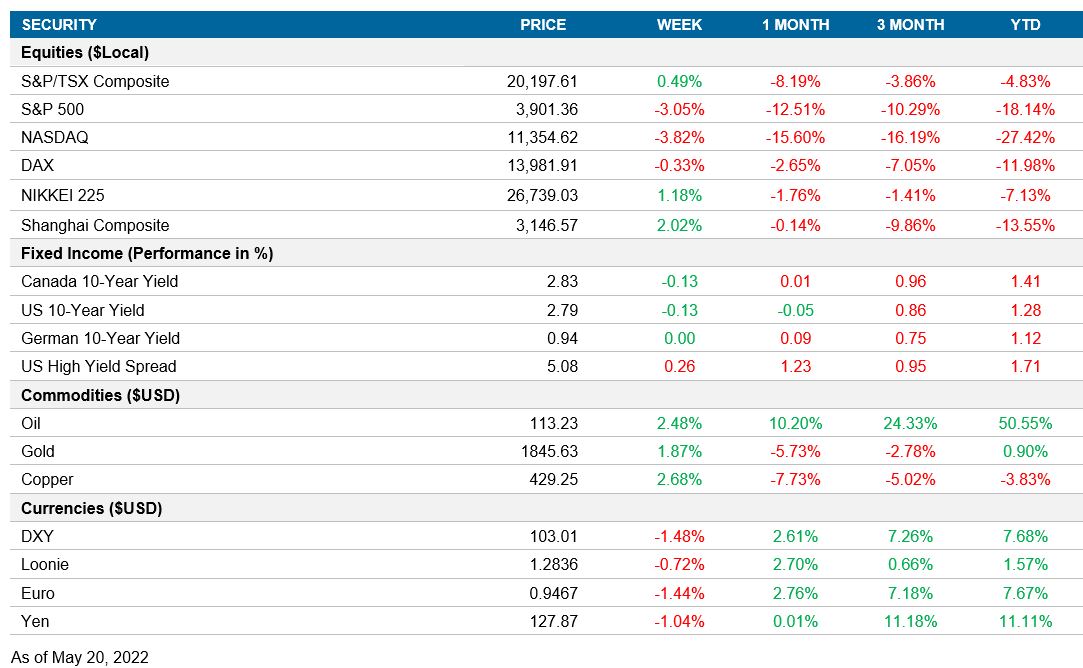 Housing starts jumped 8% month-over-month, coming in at an annualized 267.3K units, above estimates for a gain of 246.4K. This was the fastest pace in five months. A 14% surge in multi-unit (condos) urban projects contributed to the overall rise. New construction remains strong relative to historical levels, as developers have looked to tap into booming demand for houses.

CPI in April grew 0.6% month-over-month, and 6.8% year-over-year. Estimates had pegged the yearly figure at 6.7%. The growth was attributable to large increases in the price of food items (9.7%) and shelter (7.4%). Gasoline effects within CPI fell slightly during the month. Monthly CPI is starting to slow down with the increase in April showing a slowdown from the 1.4% monthly increase in March. Canada will modify how CPI is calculated from May by incorporating sales of used vehicles.

The Empire State Manufacturing Index saw an unexpectedly harsh fall in May, dropping over 36 points to -11.6. This decrease in manufacturing activity in New York state was attributable to higher costs to manufacturers from inflation, which hurt orders and shipments.

Retail sales in April increased 0.9% month-over-month, meeting consensus estimates, but were lower than the 1.4% increase in March. Retail sales excluding autos and gasoline increased 1%, above estimates, and were higher than the 0.2% increase in March. Gasoline sales dropped 2.7% after surging 9.6% in March. Some discretionary categories that saw increased spending included furniture (0.7%), electronics (1.0%), department stores (1.1%), and restaurants (2.0%).

Industrial production in April grew 1.1% month-over-month, coming in above the estimate for a 0.5% rise. This was driven by increases in production of automobiles (3.9%), utilities (2.4%) and materials (1.3%). The 60-basis point difference between actual results and the forecast was attributable to the automotive industry ramping up production.

Chinese industrial production in April fell 2.9% year-over-year, coming in lower than estimates of a 0.5% rise. The decline was caused by the fall in automobile and general equipment production.

Chinese retail sales continued to plummet, falling by 11.1% year-over-year in April, which was preceded by a 3.5% decline in March. Estimates were for a 6.6% decline in April. Lockdowns have caused consumption to decrease throughout the country. A few categories that saw a significant drop in spending included restaurants (-22.7%), clothing (-22.8%), jewelry (-26.7%) and automobiles (-31.6%).

Japan’s annualized GDP dropped 1.0% in Q1. Domestic demand slowed with only a 0.2% increase during the quarter, compared to a 0.8% increase in the prior period. The decline was correlated with a drop in consumption, due to measures being taken to curb COVID-19. Net exports fell 0.4%. An increase in import goods was caused by Japan’s reliance on energy imports.

Japan’s CPI in April increased at 2.5% year-over-year. Core CPI which excludes the effects of food and energy increased 0.8%. The headline CPI increase was a sharp acceleration from the 1.2% in March and complicates the Bank of Japan’s messaging on continued stimulus. A key cause driving CPI higher was the fading out of cheaper phone fees from a year ago, which had been masking higher energy prices.

StatCan will release retail sales for the month of March. Estimates are for a 1.4% increase, up from 0.1% the month prior. A considerable loosening of COVID-19 restrictions is believed to have helped accelerate services spending.

Durable goods orders are expected to have slowed down in April, as consumers rotated toward greater services spending. Consensus estimates are for an increase of 0.6%, down from an increase of 1.1% in March.

Ifo will release their Business Climate Index for Germany next week, a survey that measures the sentiment of business conditions. The index is expected to fall by 0.4 points, indicating that economists expect German businesses to be more pessimistic about their outlook. German ifo expectations have fallen drastically since the Russian invasion, on slowing growth and higher inflation.

The preliminary May iteration of PMI for the eurozone and Germany will be available. As in the U.S., markets will watch how business activity is holding up given the uncertain outlook due to the war and rising commodity prices.