Equities: U.S equities recovered some of the losses from earlier this week as tech rallied on positive earnings from Netflix as they surprised with better-than-expected subscriber growth and Alphabet (like many other tech companies) announced ~12,000 job cuts. The rally on Friday was also prompted by comments from Fed officials that policy rates look close to sufficiently restrictive and that only smaller incremental rate hikes would be necessary going forward.

Fixed income: Yields were volatile this week as the U.S 10yr went as high as ~3.6% and as low as ~3.3% but finished the week virtually unchanged at 3.49% as the labour market remains tight and a handful of Fed officials implied that we may be approaching peak rates. The Canadian 10yr moved slightly lower this week and is down ~30bps over the past two weeks as inflation continues to decline. The market is expecting the BoC rate to peak after one more rate hike of 25bps at ~4.5%.

Commodities: Oil closed ~1.8% higher after a strong week due to focus on the increasing demand from China as it reopens and celebrates Chinese New Year. Oil prices increased despite an unexpected rise in U.S inventories. 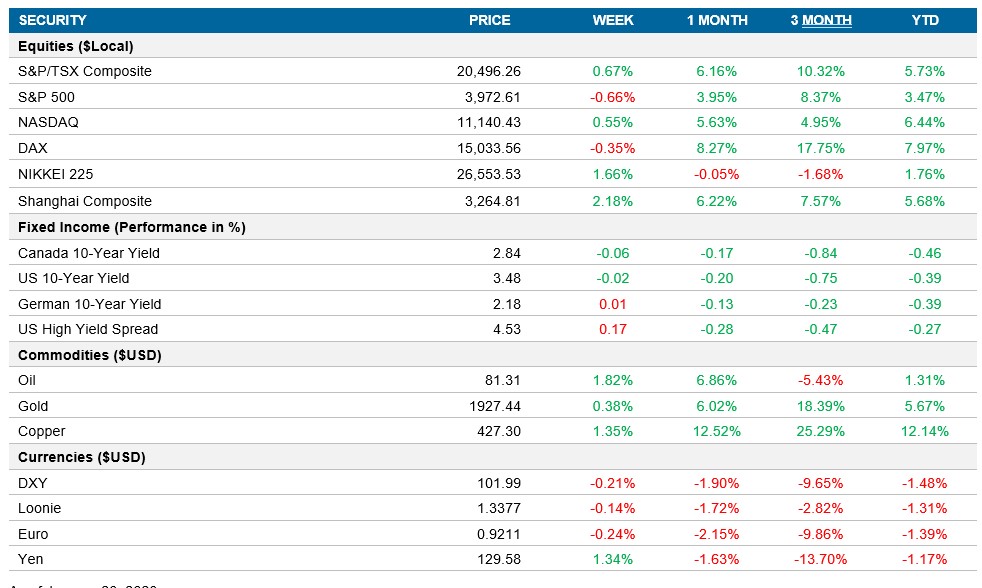 Canada’s inflation rate fell to 6.3% last month, below market expectations of 6.4% and the marks the lowest reading since February 2022. Transportation fell from 8.5% to 6% as lower oil prices drove gasoline inflation lower. Shelter did decelerate from 7.2% to 7% but does remain elevated and we saw a similar story for food costs as they came in at 10.1% vs 10.3% in November.

Retail sales in November fell by -0.1% compared to a month earlier, ahead of market expectations of -0.5% due to decreases in food and beverage stores, building materials and general merchandise stores.

U.S retail sales declined -1.1% MoM in December, below market forecasts of -0.8%. Gasoline stations decreased the most at -4.6% followed by furniture stores and motor vehicles which declined -2.5% and -1.2% respectively. Excluding gasoline stations, sales were down -0.8%, a data point signaling that consumer spending may be slowing due to high inflation and interest rates.

Jobless claims fell by 15K to 190K for the week ending January 14th, coming in lower than market expectations of 214K. This points to a labour market that remains tight despite the aggressive tightening by the Fed last year and creating doubt that they will be able to halt soon. The market still expects rates to peak ~4.9% though many Fed officials have pointed to rates peaking at 5-5.25%

China retail sales declined by -1.8% YoY in December, beating estimates of -8.6%. This was the third consecutive month of decreasing retail sales as new wave of COVID infections impacted consumers. Sales fell across almost all categories led by cosmetics, home appliances and clothing.

U.K CPI came in as expected at 10.5% in December, down from 10.7% a month earlier. This is the second consecutive month of slowing inflation and the lowest reading since the peak of 11.1% in October. Prices fell for transport, clothing and recreation, while restaurants and hotels rose higher and hit their highest reading since the late 1970’s.

U.K retail sales fell by -1%, below expectations of a 0.5% gain. Sales at non-food stores declined by 2.1% as consumers battle inflation and decrease discretionary spending. Sales are now 1.7% below their pre-COVID levels and volumes have declined by 3% as price increase and rising cost of living squeezed sales volumes. 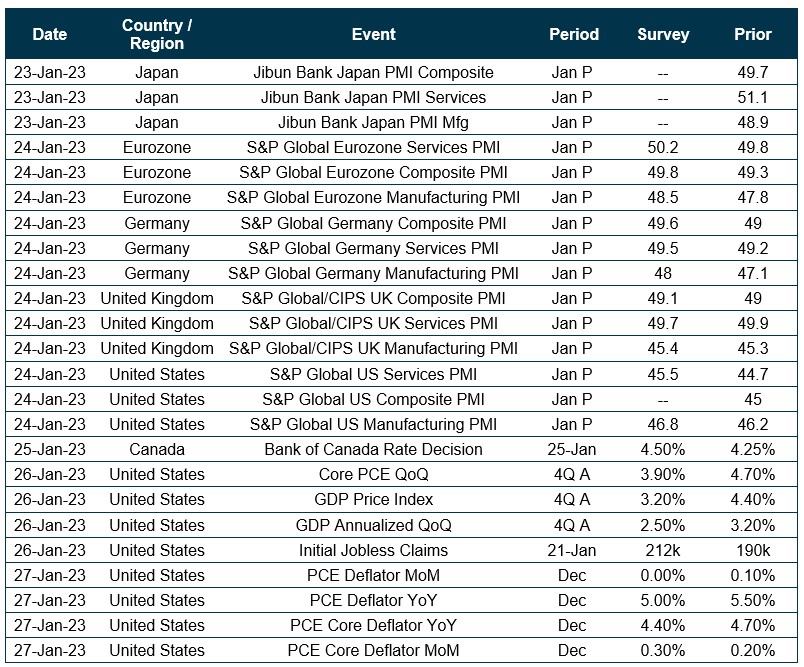