Equities: The stock market had another negative week, erasing last week's gains. On Thursday, the market briefly rallied due to technical factors, but this was not enough to overcome the inflationary pressures pushing the Fed to continue its hawkish policy.

Commodities: After breaking the negative trend with a favourable week due to OPEC+'s decision, oil posted a negative week, going down 7.38%. The driver of this downturn continues to be the slowdown in global growth caused by the contractive policy of the central banks around the world. 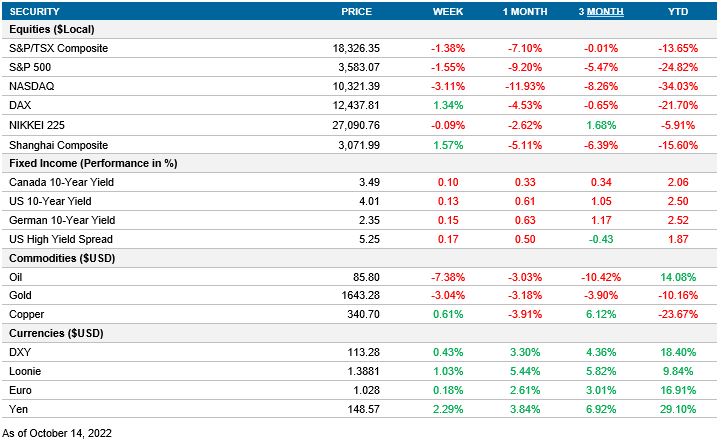 This week’s main event was the inflation data which surprised the market by coming in higher than expected. The new reading of 0.4% month over month was above the previous value of 0.1% and greater than the market consensus of 0.2. Along with an increase in headline inflation, core inflation (the reference measure for the Fed) also surprised to the upside, with a reading of 0.6% versus a market expectation of 0.4%. The inflation data reaffirmed the 75 bps hike expectations for the next FOMC.

The U.S. Census Bureau published September’s Adjusted Retail & Food Services Sales, which were virtually unchanged versus an expected increase of 0.2%. The same report revised August’s reading from 0.3% to 0.4%. This report suggests that shoppers didn’t increase their discretionary purchases due to the inflationary environment and the restrictive monetary policy.

The National Bureau of Statistics of China reported CPI data for September. The YoY inflation rate for China accelerated to 2.8% from the previous value of 2.5% in August. This change represents the highest CPI reading in the last 29 months and is close to the 3% government's preferred ceiling. However, the key driver for this month's change was the increase in food prices, which will likely reverse in the coming months. On the other hand, core inflation is at its lowest value in 18 months, with an inflation rate of 0.6% YoY.

After three weeks of high volatility, the Prime Minister of the U.K., Liz Truss, decided to replace Kwasi Kwarteng as the Chancellor of the Exchequer. Jeremy Hunt, former foreign secretary, assumed his role as the new Chancellor on Friday. In addition, Liz Truss also announced a "tax U-turn" that reversed the previously announced mini-Budget.

Statistics Canada will release September’s CPI data on Wednesday. Economists are expecting inflation to continue with the deceleration showed in August. Forecasts predict a year over year reading of 6.8% and 0.0% month over month. Given that the BoC is data-dependent, September’s release will be critical for the interest rate decision at the next monetary policy meeting on October 26.

The UK Office for National Statistics will publish September's CPI on October 19. After a decline in August, this new data will confirm if inflation pressures are moderating. The consensus is that inflation hasn't peaked yet, with an expected CPI year over year of 10.0% vs 9.9% in the previous month.

Japan's Ministry of Internal Affairs and Communications will release September's CPI. In August, the year-over-year CPI accelerated to 3.0% from 2.6%. However, the consensus is that the inflation rate will scale back to 2.9% year over year. The core inflation is expected to reach 3.0%, the highest value since 1991. This new reading will continue with a trend of inflation above the 2% Bank of Japan target.