Equities: After another negative week in stock markets, the S&P 500 closed the quarter with the lowest value in almost two years. This risk-off environment is a reaction to the expectation of a persistently hawkish Fed that will raise rates to bring inflation back to 2%.

Fixed income: On Tuesday, the U.S. Treasury 10-year yield reached a weekly high of 3.95%, the highest since 2010. The surge in yields is another market reaction to expectations for further hikes from the Federal reserve.

Commodities: West Texas Intermediate Crude Oil ended the week 96 cents higher the previous week's close. However, this is the first quarter of price declines since 2020, with a drop in price of almost 25%. The cause for this price drop is a decrease in the projected energy demand due to the dampened outlook for global growth. 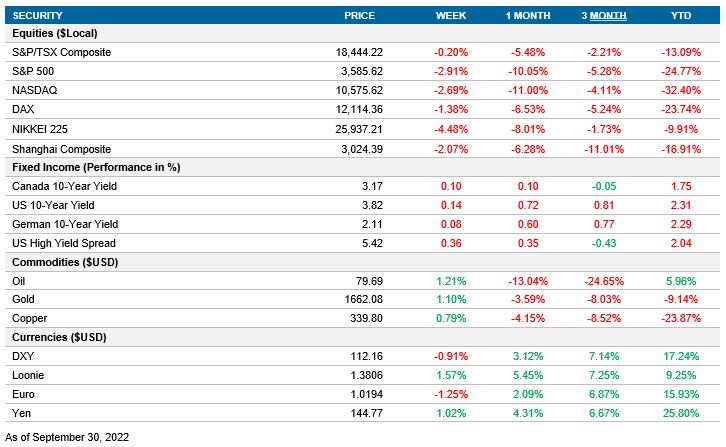 The Bureau of Economic Analysis released August PCE Deflators. The headline reading was 6.2% YoY, above the market consensus of 6.0%, but below the previous value of 6.4%. However, the critical PCE metric is the Core Deflator because the Fed uses it to assess U.S. inflation. The PCE Core Deflator YoY for August was 4.9%, 0.2% above consensus expectations, and 0.2% above the July value.

The Japan Ministry of Internal Affairs and Communications published September’s unemployment rate. The jobless rate is 2.6%, a 0.1% decrease from July’s figures and was 0.1% lower than consensus expectations. Another positive news from the Japanese labour market is that the job-to-applicant ratio increased to 1.32 from 1.29. Even though Japan had record new coronavirus cases, these two metrics show a strong labour market.

September Manufacturing PMIs were published last Thursday in China. On the one hand, the Caixin PMI of 48.1 was lower than the consensus expectation of 49.5. On the other hand, the official PMI survey was 50.1, above the consensus of 49.7. If we average both indexes together, they decrease to 49.1 from 49.4. This suggests that the Chinese economy is continuing to deaccelerate, and as a consequence, global growth is also expected to slow.

The Eurozone’s consumer price index achieved record-high double-digit inflation increasing 10.0% YoY in September. The core inflation also rose at a record high YoY rate of 4.8%. Both inflation indicators accelerated their growth versus August values and were higher than expected by the market. The higher-than-expected inflation puts pressure on the ECB to keep raising rates in the near term. In addition, the unemployment rate posted by Eurostat remained unchanged at 6.6%. Given the high inflation and low unemployment in the Eurozone, the implied hike for October’s ECB meeting is 70 bps.

S&P Global will announce September’s Canadian Manufacturing PMI. In the previous month, the index fell from 52.5 to 48.7, entering into a contractionary territory. At the end of the week, Statistics Canada will release the Labour Statistics for September. Even though the latest net change in employment was -39.7K, the market consensus expects that net employment will grow by 20.0K. In conjunction, the Manufacturing PMI and the employment data will help the market paint a picture of how the Bank of Canada’s contractionary policy has impacted the Canadian economy.

The Bureau of Labor Statistics will release their September labour data. These new figures will be critical to analyze the impact of the Fed’s tightening cycle on the job market and economic growth. August’s unemployment rate increased by 0.2% to 3.7%, mainly due to the labour force participation rate rebound, which increased to 62.4% from 62.1% in July.

On Thursday, Eurostat will release the Eurozone August Retail Sales. The market expectation is that they will continue declining by 1.7% after falling 0.9% in July. The main detractor in July was the sales of non-food products, which plunged for the second month in a row.